We are not craven people. We do not flinch. Nothing ruffles, flusters, or rattles us. We look danger in the face and laugh. We can butcher just about anything and can tackle just about any hard core farm chore.

You'll remember when we had the first Toe Crisis of 2013 - that's when our Peep popped a toe and we had to rush her to the vet? Who could have possibly guessed that we'd be in for a two-fer? 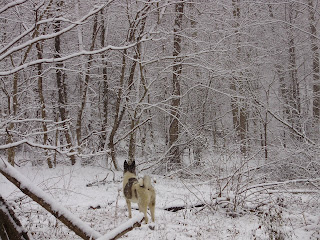 Our beautiful Kai, dreams of the Land of Snow and Ice

This time the event that sent both of us hard core, tough as nails, get 'er done farmers into a full fledged attack of the willies was.....  Kai's broken toenail.

To be fair it was kind of gruesome. She had broken her toenail mostly off and it was cracked up into the quick. There was no fixing it and we had to do something.

Queue hysterical call to the vet, followed by me kicking my husband out of bed with orders that we were leaving in SIX minutes, hurried chores, a chase, flying tackle, and shoving a big scared bear hunter into the back seat of our truck. We, in fact, left in six minutes. We got there in record time.

It was the same vet who fixed Peep's toe. She arrived with a toolkit of toe fixin' paraphernalia. "You again?" She asked.

There was a bit of a wrestling match. It is the truth that Kai is 103lbs of "nope." She is very stubborn and can become the immoveable object. I'm more stubborn and can move immoveable objects. I drug her out from under the chair and assumed the position - mostly me laying on Kai and holding her in a half-Nelson. I realize that most vet techs are supposed to do this, but frankly, they take one look at our Kai and just let me do it. The vet examined Kai's poor paw.

"Give it to me straight, Doc, do you want to muzzle her? Give her a shot to knock her out? Get the gloves?" I was not convinced this would end well.

And then in one smooth motion the vet ripped the broken part of the toenail clean off.

Shrieking. Shrieking like little girls. That's what happened next. Shrieking. After a while I realized it was us who was shrieking and not Kai. She could not have cared less but was more concerned about getting her foot wrapped. You want to reduce a couple of hard core farm types to a quivering mass of hysteria? Broken toenail will do it every time.

The vet explained the why's and the wherefore's to us but honestly we were both clutching each other and shaking. There is no way ever we could have done that. Ever. Never.

Mercifully the vet was extremely generous to us and the total bill was less than the gas we had to buy to drive up there. Kai ran for the truck and I paid with shaking hands. Honestly we were so overwrought by the situation that we had to go home and lay down for the rest of the day. Kai? She was fine. She had the wrapping pulled off with in 5 minutes of getting home but I had more vet wrap, much to her chagrin.

Pretty much we are now just giving it a chance to grow out. We kept it dry the first couple days and now we are just trying to keep her from messing with it. She's upstairs right now with a sock on her paw.

When I say I don't even ask, "What's going to happen next?" I am not kidding. We are just hoping that this is the end of My-Toe-Crisis 2013.

For now I'm just hoping that a certain science teacher out there appreciates all the work I put into this stupid mitosis joke... My Toe (cri)Sis... get it? You know who you are, wife of the Worlds Worst Friday Punster....

Happy Tuesday everyone! Anybody else got a toe two-fer that tops this?

Effort acknowledged ;) Glad you are all recovering. Still more glad that Jake had his toenail incident prior to adopting us.

haha that's the position I have to use to cut the toenails of both of our tough kelpie dogs, you're think I was tryigto murder them from the noises they make...glad your girl is ok :)

I so understand where you are coming from. Our little Pom, Buddy, broke his toe nail way back this summer. Yikes. Yes, I took him to the vet, but was not as brave as you. Our vet sedated him and fixed him up. I was still horrified while I watched him grab it and pull. I still get the willies when I think of that. So glad Kai is recovering.

Thanks for the laugh. Seriously. That is just about the funniest thing I've read in months.