Consumer Reports and the Rise of Superbugs

I was going to say something entirely different this morning but I thought this report from Consumer Reports on the CBS This Morning news show was really important. 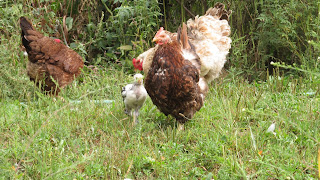 You can also read more here from their website. The data point that really hit me was that, "... MRSA and other resistant bacteria infect at least 2 million people in the U.S. annually, killing at least 23,000."

That's a lot of folks.

We've been talking a lot about why raising your own chickens is a fun, easy, and satisfying project. If you are on the fence about raising meat chickens... you might just want to take a run at it.

That's all I have to say today. I think we can all admit it has been a very difficult week or so in world events. So let's all concentrate on farming, keep calm, and carry on.

No matter what happens, growing your own food puts you in a better position than people relying on a supermarket to feed them...

Sheeeeeeesh. As usual, timely and important information. I was on the fence about meat chickens in the spring - I really don't like butchering and I don't have a plucker, which would make it so much easier! - but I think you've decided me. I want to protect my family.