My victory is complete! Feast your eyes on this!  Running off isn't so funny NOW is it, porkers? 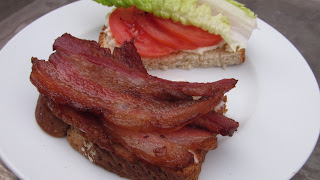 I went and picked up the bacons today..... what a great day!  I drove off happier than ever. It ended up that we only took in a total of 50lbs of bacon and ham. I think we normally have taken in more than that. The total cost for cured, smoked, and vacuum packed was $75. We thought it was a fair price and we are glad to pay extra for the better packaging.

There was an old timer in there picking up at least 800 pounds of beef. He turned to me gesturing at all that meat, winked, and said, "Serves her right for not having a calf!"  His wife looked mortified but I was glad that other folks have my same sense of farm humor.

You know it's been a weird week. A lot of hard things happened. It started with the neighbor's tree falling on our dog moat  - which destroyed the fence - and it ended with the loss of one of my favorite little ducks due to varmintry...and on top of all of that - winter finally showed up.

In the middle of all of these shenanigans the facebook account belonging to one Brunhilda Goosenstein got shut down... probably due to another sort of varmintry.

Thank you to everyone who came looking for me. I especially loved all the email and notes... and supportive comments. If you were wondering where I was you can find me here at the official facebook OFG blogger page.

The problem with this kind of facebook page is that it's for businesses. So it's not like your personal page. Unless my pals "like" and "comment" on the posts then you won't see all of my updates in your feed - just some of them.

I could pay the facebook so that everyone sees every post that I make.. but honestly. I'm pretty sure no one is that gripped by the goings on.  And I don't have enough pocket money to guarantee that everyone sees which TV show I'm watching right now (but it's this one.)

It's also hard to hold a conversation because of the way the comments sort. But worst of all.... I can't read your personal pages. So I can't give anyone encouraging "yay's" or ask about your dogs. I'm really wondering how Cziva is tho, so if anyone can tag her momma, I'd love an update. And a picture.

You'll remember this happened before....me and the facebook have danced previously.

Is my day ruined? Am I gonna "do" anything?

Angry people are their own poison. I don't even have to "do" anything... they eventually will just rot from the inside. So as usual I'm just going to go on with my own life, make fun of certain people to my real friends, and never think about those people again. 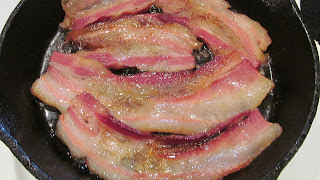 In the meantime I'm trying to work it out with the facebook but you know that I have bad blood with them already.

Someone somewhere might be thinking they really got one over on me... But they don't have a freezer full of bacon that tastes like victory!

Happy Friday everyone!  Did you actually just pay $3 for some store tomatoes so you can make a BLT? Did you butcher that bacon from the carcass of your enemy while you yelled, "RUNNING OFF ISN'T SO FUNNY NOW, IS IT PORKERS!?!!?".... cuz I did.


Posted by Ohiofarmgirl at 1:30 PM

It's the Porkapocolypse!! Had me some farm raised bacon this morning, on top of a farm raised (very big) scrambled egg. Yummmmmmmmm!

Life is better with bacon. Yay

Yum, I can smell that bacon from here!

I wondered why I couldn't find you anymore on FaceBook! The rats.
I can practically smell the bacon! My husband can't figure out where to raise hogs on our place. It used to be the slab (enclosed) where the manure from the barn gets pumped, but since we're milking again it's in use again so no hogs there. I'm about ready to just build something myself and raise them! Ha.
I love your blog.

hey ELT!!! i've been missing you too! if you 'like' my OFG blog page and comment then at least i can tag you to chit chat. it's VERY annoying. :-( but i'll get it worked out. and ha! it may or may not be the case that the first time we got pigz delivered my husband came home, stood agog, and yelled, WE ARE GETTING WHAT TODAY!?!! mighta not been entirely clear with him about the plan. good thing he is a good sport! if you have an area near the barn - or maybe that would use the barn as a windbreak... then build up a pen, plug in the charger and away you go! also with you milking - it would be like those pigz would be free. once they are over 60-70lbs you can feed them out on cracked corn and milk. yay!
ps thanks for coming by.

yay ELT! but ha! and oops.. i deleted your comment b/c i am a big doofus. totally understand about not overwintering. it is the WORST. we did it once and it was horrible.
:-)