The freezers are stuffed full of meat, the last of the bacons have been smoked, the pig heads are gone, and all that really needs to be done is to slice up the pancetta and put it in the freezer. Now I can just sit back and while away the days.... good riddance, pigz, now get in mah belly! 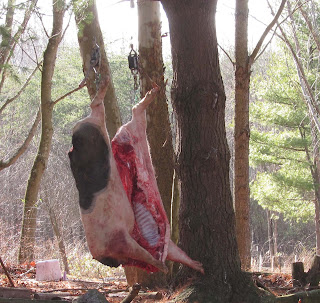 However, before we go any further we need to put a cautionary warning here. So be forewarned all you pig snugglers, vegans, vegetarians, and tender folk THIS IS GOING TO BE A POST ABOUT BUTCHERING. THERE WILL BE SHOOTING, BUTCHERING, PIG GUTS, AND A RE-ENACTMENT OF THE "KALI MA" SCENE FROM INDIANA JONES. THERE WILL BE BAD JOKES AND TOTAL DISREGARD OF PIGZ AND THEIR MISERABLE LIVES. DO NOT READ IF YOU ARE GOING TO BURST INTO TEARS. NEGATIVE COMMENTS WILL BE MOCKED, BLOCKED, AND NOT PUBLISHED. I'm not even kidding and you know it. If you are on the fence or maybe a little squeamish you might want to look at Little Mo who fixes everything with his deep, soulful eyes.

The day was glorious.

No one was more eager than I was to run right out there and shoot them damn pigz - especially after they went on the lam. No one except my husband who is never in a hurry to do anything.... but I could barely get my jacket on and out the door before he marched right down there and shot them pigz where they stood.

The pigz were already in our smallest pen as punishment for gallivanting around the country side. So it was really just a matter of turning off the electric fence, getting the Dog Horde into place, and setting myself up as back up.  As always, killing a large animal can be dangerous and not just for that pig. So I was positioned well up on the hill and The Big Man went down to the pig yard armed and dangerous. He also had the official "sticking" knife in hand. I had my full sized axe ready just in case.

How To:
Step one: Position yourself safely, back to the audience, pig should be looking down and away from you - preferably at something on the ground. Like food.
Step two: Shoot pig.
Step three: Cut pig's throat to ensure bleed out.
Step four: Declare your victory.

That's kind of how it goes. You can find out more detail in the previous Hog Harvest recaps below or on the Pigs link at the top of this page.

Everything went smooth as silk.

The only bugaboo was that as soon as the fence was off the pigz tried to make an escape. But they were very interested in the bucket of food we brought down to distract them. So it was basically over for them in about 8 minutes, which included the standing around to ensure proper positioning and then waiting for Pig 2 to settle down and get lined up.

The shooting and stickin' were picture perfect. My husband is a wonder. A+

We let the dogs down to sniff around and see their fallen enemy. Zander loved it. Then we got to work.

The pigz were much much bigger than we thought. They were at the upper end of what is workable for us and were difficult to move around. That was a lot of dead weight. Literally. 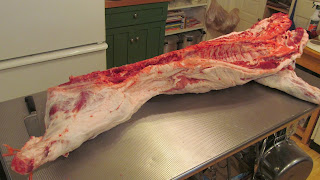 We figured about 150lbs per half.

We de-headed and gutted the first pig on the ground which did not go as well as we would have liked.  First, we didn't do a good job of making sure the batteries for the sawsall were charged. So that was a little problematic. However, this did allow me the opportunity to finalize my victory over that pig by cleaving it's head from it's body with my axe. I am not even kidding. It was extremely satisfying.

Then I had to take the sawsall battery into the house and put it on the charger.

We eventually contained all the guts. The dogs couldn't get enough of this part. They sat watching from the dog yard, enraptured by the going's on.

Then we got the Bacon Wagon of DOOM and hauled the first carcass up the hill, halved it with the now-charged sawsall, and hung it from a tree like a lovely meat pinata. We did this so the carcass would cool as quickly as possible. After congratulating ourselves we marched back down the hill for pig two.

The next pig fell just inside the pen which was not perfect. So we got the 'come along' and hand cranked him out of the pen into our work space and onto the Bacon Wagon of DOOM. This worked much better and someone please remind me to do this again next time. It was extremely difficult to get that big of a pig onto the trolley but it was worth the effort. If we had a big tractor we could have just hung him from there. But we don't so we just old schooled it. 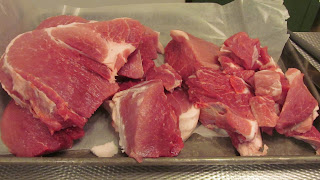 It was a lot of meat. What's for dinner? Pork. For the rest of the year. Every day.

Pig Two was hauled up the hill and we commenced with the skinning. It went mostly well. I gave myself a C+ for skinning that one. Not perfect but it went OK and didn't take very long. We used the sawsall to cut the carcass in half (length-wise) and then hung the halves from another tree.

Normally we would have hung the pork halves in the garage. However, the garage is full of dusty and stinky meat chickens who require heat lamps. A bad combination for meat hanging. So we took a chance and just left them outside. It worked out very well. The only downside was that it was very windy that night and some dust and pine needles fell on the carcasses. But not bad. I don't think we should have covered them because you really want all the heat to get out of the carcass. It was easy to trim those "dirty" parts off and really I'm over stating how much there was. I just wanted to get this in my notes.

Skinning the second carcass (which was the first pig up the hill) was a misery. You know all those videos showing people skinning a deer or whatnot while it's hanging? Yeah. That is for the birds. Did not work at all. We were both covered in ick and I was too embarrassed by such a sucky job that there was no way I was taking those bacons into the butcher. I am not trying that again.

And then that was it. We cleaned up ourselves and our work area. Took the tenderloins into the house and fried them up in a pan.

The next morning we started the parting up process. As I mentioned at the beginning of this post, these pigz were much bigger than we thought. My hubs put each half - gutted, de-headed, and skinned - at about 150 pounds each. They were VERY big.We should have butchered them about a month earlier but due to extremely warm weather - than me being sick a couple weeks - we just couldn't do it. Next time we will try to go for "earlier" rather than "later."

Usually there are some questions so I'll cover them here:

Was it gross?
Nope. It was glorious. I think it's interesting and we make a lot of stupid jokes to break the tension.

Didn't we feel bad killing those piggy-wiggies?
Nope. Not even.... especially since they ran off. They had it coming and I know how to hold a grudge.

But...
NO!  No, we did not feel bad at all. Those pigz were full of meat and we would either lose our entire investment of money, time, feed in them and let it all go to waste or we could get out there and get the job done. We are "job done" kind of people. So we did. We are also fully determined not to go back to store meat.  So we were highly motivated to get our food.

Was there any crying?
Nope. But I think I saw a tear in Kai's eye when I handed her a huge, fresh bone.

Any PTSD from this?
No. None. I sleep well and full of pork.

To get a full picture of our History of Hog Harvests, the tools we used, and other more detailed descriptions of other porkocalypses you can read here:

The number one reason folks find and read my blog is to learn about butchering. My goal is to make sure you know that you - yes you - real people can and should raise and butcher their own meat. Can you raise pigz and butcher them in your yard? Yes you can! We are just regular people. If we can do it than you can do it. Come on now.... if you are toying with the idea of raising pigz this year then I am here to tell you that yes you can! Yay meat!

Happy Wednesday everyone. How did your hog harvest go? Did you do that Kali Ma scene?

Posted by Ohiofarmgirl at 9:10 AM

I would have helped you if we live closer, in exchange for the pig heads.

Thanks, DDD! You might have to fight the catfish for those pig heads now. Next time... :-D

Congratulations! Is your garbage man going to have a bad couple of days soon?

In that second photo you can still see a spider web reading "Some pig."

i have strong opinions about Charlotte, Budd, i think she was a witch.

About the fresh pork bone for the dog... no worries about worms? Do you worm your pigs/dogs? Not judging, trying to learn. Thanks!

hey shy! no worries - a good question. and nope. we actually wormed these pigz early - like very early - when we first got them but normally we dont. we noticed they were starting to lose condition which was our clue. as for the dogs - i think we had to worm Zander when he was a baby....and Lucky is our poop eater so he's been wormed a couple times. other than that - nope! all good here. there will always be a big fight over raw bones vs not - but we give them in limited quantities and always supervised. honestly, we intentionally give Kai the joint bones b/c it cleans her teeth so well. much better than getting sedated at the vet! thanks for the question!
:-)