Operation Ham in a Can or "How Jake Saved Our Bacon"

Grandpa GoodNeighbor let me know that I've been posting too much business and not enough hilarity lately. I guess he's right and we've been all be nose to the grindstone. So I decided to talk about one of my favorite topics - and probably one of Grandpa GoodNeighor's also. I'd like to tell you about the youngest Good Neighbor kid, Jake. 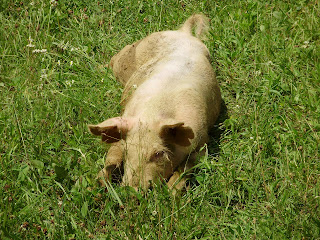 That sounded a bit like an episode of Green Acres! Except that Mr Haney wouldn't have helped save the day like Jake did. What an epic story.

Oh thank you! I needed a gut buster this morning!

OK, so you made me smile this morning.

That was fantastic. Lol. What an adventure!

Our goats we're too sure of the pigs either, until our big jerk goat jumped into the pig pen yesterday (they share a fence) and headbutted one of the porkers. :)

What a picture! Thanks for the good chuckle!

LOL! Great story - very well written. I just read it out loud to my kids who cracked up. Thanks for sharing! :)

Hahahaha! I really needed that belly laugh this morning! I love Jake! And I would have loved to have been there to watch all of that unfold. But I'm afraid I would have been hanging with Nibbles - and just as useful. Great story!

Simply hilarious! I can visualize the entire drama!

“But the day ain't over either.”

That was THE FUNNIEST thing I've read in a long time. Thanks for sharing!

Ha ha ha! That's a fabulous story! Man I wish we had kids like that near us; the kids I do see won't even look up when I nod and say "hello" at them! Can you believe it? Rude!

Awesome! Love the story and I need the laugh. Three cheers for Jake!!!

Thanks Villager! Some of my friends have threatened to secretly film our "normal" day here.

Thanks Mr. H - nothing but ridiculousness here.

Rae - I laughed ALOT about your pig-butting-goat! Thats the way - tenderize the pork... hee hee hee

Thanks, TAPGal... I really don't make this stuff up. Can you believe it?

Thanks Mandy, tell the kids "hi!"

Are you kidding, B2B, you'd be right there in the thick of the action!

Thanks David! See what you have to look forward to when you get your farm?

CC - makes you want to run right out and get pigz, don't it?

Thanks Tami - glad you stopped by. Grins are always free.

You know it SSF. Thats why we love the Good Neighbor kids - all of them are wonderful.