Well friends, we've had our first casualty in The Great Pepper War of 2012. It was just two days ago during the last and final surge against the never ended bucket of peppers. There I was in the kitchen, surrounded by boiling cauldrons of bubbling pepper goodness. 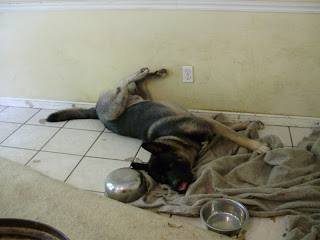 Man down! The Bubby takes one for the team.

The end was in sight - I only had a few sweet peppers left in that bottomless bucket. But I wanted to have one final triumphant extra spicy salsa. So I donned my heavy, hot pepper handling gloves and headed to the far back corner of the garden to get one of the bad boys. You know the ones - those extra long, extra skinny, pointy, extra hotsy totsy peppers with the special warnings on them. Oh yeah, this was gonna be a spicy salsa for the record books. I marched out to get the Holy Hot one. Without incident.

On my way back to the house I was greeted by the dogs wagging all around. They had been on morning patrols and were covered in dew, those weird sticky green seeds, and had come to report no unusual goings on. "Good work, men!" I called to them as I made my way thru the wagging, panting, bouncing horde of dogs. Zander...aka "The Bubby" was especially bouncy as he followed me to the door.

Just as I as opening the door, my prized Holy Hot pepper in my protective gloved hand... it happened. In an instant my joyful pepper victory turned to horror. I was being slightly jostled by a bouncing Bubby and then.....a yelp.

I turned and saw The Bubby. Crying and pawing at his eye.

I looked at The Bubby. I looked at the Holy Hot pepper in my hand. It took me a few seconds before I realized that I had just stabbed The Bubby in the eye with a scorching hot pepper.

He ran. I ran. There was running. And crying. and more running and crying. Finally I got ahold of my 100lbs+ squirming crying puppy. His poor little eye was starting to tear up. And when I mean little, I mean to tell you that he has very small squinty eyes to begin with. Talk about a one in a million shot! Sheesh!

Then there was a lot more running and crying. Mostly by me. Luckily I was better in this crisis than, you know, other ones. I sprang to action with the phone in one hand - cuz you know we have the Good Vet on speed dial - and a cold compress in the other.

After more running, chasing, and wrestling I got Zander tackled and was able to hold the cold washcloth on his eye. He did not protest.

Of course the whole time I was trying to figure out what I was going to tell the Good Vet. As you can imagine they've heard just about everything from us. In fact I am fairly certain they have a standing appointment for us in their books. Probably called something like the "What Could They Possibly Come Up With Now Hour."  We tend to win awards from them with titles like, "The Weirdest Thing We've Seen Today"  and "The Worst Wound in 15 Years of Vet Practice." And my personal favorite, "Seriously? How Did This Happen?"

After determining that the eye poke was probably not fatal I brought Zander in the house, gave him some snuggles, a can of food, and watched him. He promptly passed out on the floor - asleep. When he woke up a short time later I tripled checked his eye - it was no longer tearing nor red. I made sure he could see and follow my hand to ensure his vision was not impacted, gave him more snuggles, and sent him back outside to play with his sister, Kai.

And thusly ended The Great Pepper War of 2012. Just one man down, I think we did OK.

Happy Wednesday everyone!  Any body got a canning casualty to top that one?

Awww, poor widdle Bubby! You will think of this with every bite of that Bubby salsa....

Poor fella! glad it was just a tip of a pepper. The skins are not hot. If it had been cut and he'd gotten some pepper juice in ther it would have been much more , uh, interactive. Glad all is good now!

I've pepper juiced my own eyes so many times, I think in a riot pepper spray would barely make me blink LOL

Wow! One in a million shot for sure. Poor dude! I'm glad he is okay. I'd like a can of that extra spicy salsa! lol Love the spicy!

We had a Rott that used to love hot stuff,

I shouldn't laugh.. I won't laugh... Ah, who am I kidding, cracking up here.
Poor little boy. While I'm sure it wasn't funny at the time, and I know I'd be panicing same as you if I'd done it, it does make a great story. Glad to hear there was no long term pain for him.
Just curious though... Could you hear the vets laughing down the phone line after they hung up? ;)

LOL, I am sorry but that made me laugh. You and your Bubby and here I am trying to wrestle a 4 month old kid who has knocked off her horn and screaming bloody murder. I'll take the dog with an eye poke any day.

I'm just wondering what you did with the pepper? Will you call your canned hot salsa, the "Burning Eye" batch of 2012? Smiles! I'm glad Zander is OK.

You had me laughing so hard on this one. So glad he is OK. My kitten one time got a plastic bag handle around her neck and was speeding through the house scared. Took some time to coax her out from underneath the bed. But every time I think about it I start laughing. She was running away from the bag only she wasn't LOL. She was OK but still crawls into any bags left on the floor when I'm putting away groceries. Silly girl.

Every bite of that salsa will be like a stab right in my heart, Free! My poor Bubby!

He's doing just fine now, Dave. I think it scared him more than anything.

Linda, the Bub said he was in practice for doing some protesting.. ha!

Sara, I'm telling you - I should be a lottery ticket with those odds.

Hey AnnNF! My goose likes hot peppers too - how weird is that?

Go ahead and laugh, Nic... once everyone calmed down we all had a good laugh.

Quick Damummis! Poke that goatie in the eye - that will take the pain from the horn! ha ha ha. just kidding!

Jody, Burning Eye Salsa is the best name ever!! Thats how I'm gonna label those jars for sure.

Here ya go... a graphic for your Burning Eye salsa :D

Linda, I've been looking at Zander and saying "the Great Eye is upon you".. he loves it. ha! excellent find!!!