I know that everyone in the Mid-West is running right outside today to enjoy the cooler weather.... what a relief! 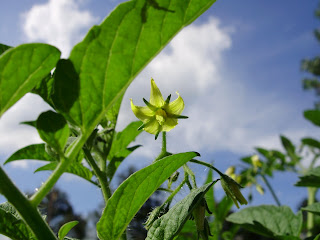 Maters are still setting blooms....
I have a lot to say about the weather around here - most of it is me complaining about that its too hot or  too cold... but wow. You just can't beat the growing season in these parts. Remember the beans I started just the other day? They are flying out of the ground.... 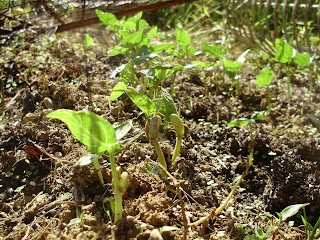 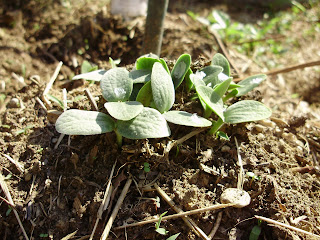 I'm pushing the limit of our "first frost" with these butternut squash - but they just might make it. The beans will be ready at the end of September so they are perfect. And we tend to get a night or two of frost then some warmer weather. Altho - one of the old timer's in town said he thought there would be an early fall. We'll have to keep a look out for that. 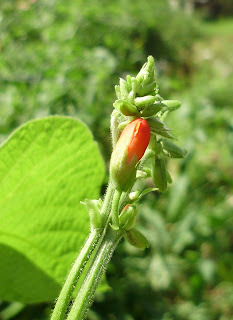 These scarlet runner beans are some of my favorites. From seeds last year - they did great.
Work on the Square Garden continues with even more planting. The soil really has improved over last year. Mostly I made a big pile of barnyard litter and poo and just let it sit. Nope - I didn't even turn it. But the results are pretty dramatic. I also planted winter wheat and clover over it. That really helped. 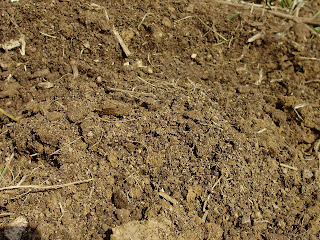 The 'before' picture was pretty much red clay - now.. this is what I'm talking about!
I had to pull up some gourds that were failing (stupid squash bugs!) - but these early plants did a great job of being a trap for those bad bugs. I went out every morning and soaked the bugs and their eggs with a strong mix of Dawn detergent and water. Of course, it was kinda hard on the plants but the bugs pretty much killed them anyway. These few gourds were much appreciated by the pigz, tho. 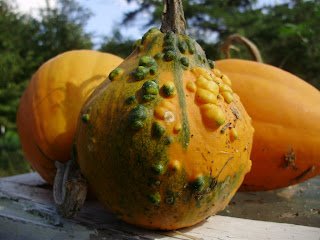 And finally.... a rare self portrait. That's me with the seed packets...and my big goofy garden hat. 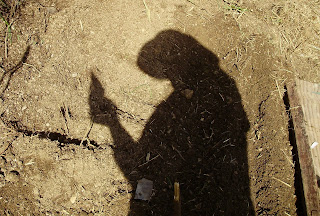 Other self portaits can be seen here as The Abominable Snow Dork, A Girl and Her Goat, and OFG Bloodaxe Varmint Killer.

Planting Notes from yesterday. BTW, Walmart of all places, still has some seeds left. But they are going fast.

* Three rows of bush beans next to the raised bed.
* One empty row - but Kale started under cover at the top of the row.
* Leeks (dont think they will be ready) beside the foot path running east/west.
* Two short rows of sugar peas
* Brussels Spouts
* Moved more Big Pumpkins over to square raised bed, also the leftover watermelons along the fence line.

That's all the news that's fit to print. Hope everyone is enjoying the cooler weather!

Happy Thursday everyone - are you all watching the finale of So You Think You Can Dance?
Posted by Ohiofarmgirl at 8:12 AM

I just love your self portraits. They are so you :)

This weather is the best! I will definitely be getting caught up on my gardening and fall planting.

I heard there'd be an early fall, too!

Someones been very busy in the garden...your plants do germinate quickly over there. It was really nice to see finally see some pictures of you.:)

We planted beans and they came up very nicely. Their tender shoots were such a delicacy, delicious... for the rabbits. Hopefully there will be some survivors.

Your way ahead of us in that part of the country..I just about have taken everything up ...and need to start planting if I can stop canning.

Hi Robin! Ha - they are me! hee hee hee I'm loving this weather.

Hi Candice! I'm glad for the cool down but no one wants an early frost, especially with our late planting.

Hey Mr.H - I hear I look just like my brother. hee hee hee

Ginny, I'm planting like the wind hoping to beat the first frost. Hopefully this fall garden will produce enough to make up for our sorry summer.

Oh I had no idea you could replant beans and butternuts this late! The deer ate all my beans and the butternuts are all failing for one reason or another - a whole row with no viable fruit yet. But wait til I replant in the well-mucked was-oats bed... WOO HOO!