Last of the Peppers

Yesterday I got the last of the peppers taken in - several baskets! After a cold start to the day it was beautiful and a lovely day to be outside. 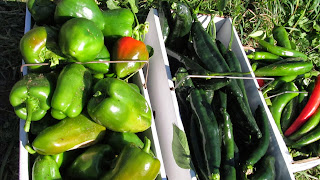 However I did not get the pears. I had planned "Operation Shake It, Baby" perfectly. My big idea was go to and give that big pear tree a shove or two, the pears would fall gently to the ground, and then I'd scoop 'em up.

Yeah. That didn't happen. Aside from the obvious flaws in my design plan - including but not limited to me getting thumped in the head by a rock hard pear falling about 30 feet..... I was thwarted by my arch nemesis - yellow jackets.

I do hate mean beez.

You may not know that I've gotten stung up a couple times this summer. Pretty bad. Or I should say my reaction has been pretty bad. The first time I was sick for about a week. The next time I was in a benedryl induced coma for two days. Both times I ended up with big hand-sized welts when I got stung.

So I was not about to walk thru the death swarm that was surrounding the few pears that were on the ground. Honestly, there were about 90,000 of those stupid yellow jackets!

At one point me and the dog had to run. He kicked over one of the mean-bee-filled-pears and they were really mad. He and I got away just fine but somehow Kai got the worst of it - and a fat lip. She was stung bad but not as bad as earlier this summer when a wasp stung all in the inside of her mouth!  By the way, if that ever happens to your dog then call your vet immediately. They can give you the right dosage for a quick drugs store fix.

Anyway, all's well that ends in a glut of peppers. I'll head out early when it's still cold and try shaking that pear tree. If you don't hear from me then it may have gone badly. What could go wrong? Right?

Happy Tuesday everyone!
Posted by Ohiofarmgirl at 6:00 AM

We've been lucky this season...not many yellow jackets...some years you don't even want to go outside. I was able to can 20 jars of pear halves...good year for pears.

Save up your 2 litter bottles and make a bunch of wasp traps (instructions are all over the net). The trick is to get them out early, bait with fruit juice in the spring. Once the roaring days of summer hit (or when they start getting really mean) bait with raw meat. It won't kill them all, but it will knock their number down a few notches if you put enough traps out.