I caught these goings on the other morning. Nicholas and Lucky on one bed.... and just behind Lucky's ear is his food bowl. Things could have gone very badly. 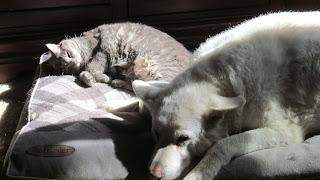 It all ended well. I moved the food and then Nicholas got annoyed and left. Lucky got his food back later. 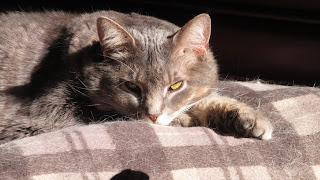 My beautiful Nicholas strikes a pose. He can see into your soul.

There has been a lot of food consternation around here lately. We have still been on a mission to get Nicholas down to a more normal sized cat. His initial goal weight of 19 pounds was reached a bit ago and now we are headed toward 17 hefty pounds. The next time he goes to the vet they are going to be wow'd by his accomplishments.

Our Sweet Peep is also on a reduction plan. That isn't going so well. "Just feed her less." They said. "It will be easy." They said. Yeah. Sure. All it's done has turned her tortitude up to 11. It's been hell here and I am not kidding.

One thing the vet told us was to feed the cats only canned food - not dry. This has worked really well. I'm not sure if our success is due more to a low carb type diet or because we are rationing their food. But our Paleo Peep has shown some losses as well.

In the meantime the cats, like a gang of sharks, start circling me early in the morning to make sure they get their carefully measured out ration of cat food love. If I'm not on time then the cats start heading toward the dogs and their food. Starvation creates very strange bedfellows indeed. Just ask Nicholas.

I want to give a special shout out to OneVikingGirl for her tremendous post on roasted veg with mayo. If you read the comments in my blog you'll know she is a visitor and we've been have a discussion about this very thing. I was a naysayer until I realized I was using mayo as a salad dressing on roasted veg - it was delicious. So thanks! OVG, I'm going to be trying this out very soon. Yay!

Posted by Ohiofarmgirl at 11:30 AM

Good advice as cats aren't designed to eat only dry food. Domesticated cats are not far off their wild counterparts. And wild cats get most of their hydration from their kills, not water. So when you are feeding cats only dry cat food, you put them in a state of constant dehydration. That can cause all kinds of health problems. We discovered this when our cat, Lucy, was diagnosed with kidney disease years ago. Also, feeding a high quality cat food will help them maintain a healthy weight. Our Onyx was always overweight until we switched her to a wet cat food that was not full of fillers and by-products. We like Wellness and Evo. The cheapest I've found both brands is on Amazon. Cats always tug at my heart strings. Good luck!

Thanks, Bottle Tree! In the past we've used both dry and wet food... but gosh, this is really working out well. But we buy a LOT of catfood. Ha! We even switched our barncats to wet food only - and of course, everything our Shine can catch and kill. I stopped by your new blog to see your cats... I'll peep an eye out for when you feature them. If I miss it, let me know!
:-)

Those dry dog nuts are full of cheap grain fillers. I call them doggy junk food. My precious taz only eats meat and veges. But she insists i cook her food. Picky dog. I bet the cat nuts are the same.