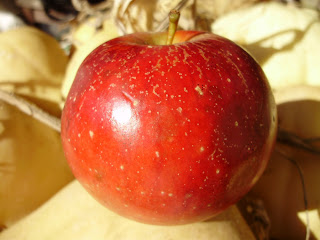 Its the best time of the year... apple season finally arrived. I LOVE it.... apple pie, apple crisp, apple sauce, apple pancakes, apple cake.. oh happy day! I'm working my way thru a bushel of these beauties. Our first apple crisp was heavenly.

Fall is moving right along. You'd think we'd get a bit of a break, but realistically things won't calm down until the last jar of lard is put up - sometime in late December or January. But at least the mornings are cool, the humidity is down, and the living is relatively easy...I'm loving the cool nights and open windows.

Yesterday we had some new friends come and get Ginger. Last week we took Vita back to be bred for the winter - we'll see her in the spring after she has her babies. And now we are getting Debbie and Nibbles ready to be shipped off to be bred.  They will be with us for the winter when they get back from their dates. They are out there trying to figure out who is the boss of whom. There is a lot of running and chasing going on...when they aren't laying around in the afternoon sun, that is.

Either tomorrow or Friday we are butchering roosters from The Rooster Crew.  They are entirely out of hand these days and are causing chaos in the barnyard.  They have been acting like a gang of thugs terrorizing the hens and the turkeys. One of them has already earned the position of "first" while a second had better watch his P's and Q's... he was crowding me this morning. The dogs set him straight.

We still have a couple of ducklings and 2 sets of baby chicks popping around so we are keeping an eye on them... Happy is still the happiest little duck I've ever seen. What a charmer!

The hens are getting back into the swing of laying after several weeks off.

We are getting everything picked, packed, and canned or frozen.... and I'm making cheese like a mad woman.

And we are working double time on the pigs so we can get them ready to butcher. Mostly we are just feeding them everything we can our hands on.  We are also working on chainsawing down to the pond to give them more room and allow them to clear out all the bramble. So there is more fencing in our near future.

The good news is that they are already starting to take up the corn in the fields all around us.  We'll be out there picking up all the free corn after the combines go thru... we know folks who let us glean.  "Free" is always good when you have this many little bodies to feed so we are thrilled. 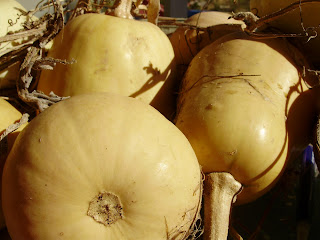 Oh. And if you are concerned about The Great Canned Pumpkin Shortage of 2010.... we got it covered.  Along with these lovely butternut squashes... there are always the monster squash that Pepper is so interested in... you know.. I think something is going on with them. Hum....

That's the news that's fit to print! Happy apple season everyone!
Posted by Ohiofarmgirl at 6:05 PM

I love apples! Wish they grew here in Alaska. Sounds like a wonderful harvest

Hi Melanie! No apples?!?! Really? Hum... I guess I never thought about it. But on the other hand.. we don't get lovely slabs of salmon like you were showing on your blog! WOW do I miss fresh ocean fish. Sometimes I stand in front of the icky formerly frozen fish in the grocery store case and weep.. just a little....