Working on the alfalfa field

One of the projects we want to get going is our own source of hay. This was a bad hay year - it was so dry that most farmers could not get enough cuttings off their fields. Thats why hay is so darned expensive now. And scarce. 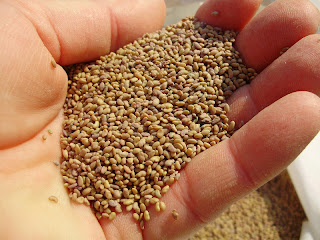 One day this alfalfa seed will become goat's milk.

I saw a rant on craigslist the other day - just before it was yanked down - accusing farmers of being jerks for selling bad hay for exorbitant rates and forcing people to sell off their stock. Its not a conspiracy people, its the drought and things are going to get a lot worse. One of the ways we've been dealing with the upcoming "Hay-Mageddon" was to buy some not-s-bad-hay as soon as we could. And we've been buying a little at a time. We'll buy one more round here soon, but then its pretty much "hope for the best." We've also been grazing the goats a lot to save the hay for later this winter. But more on that later. 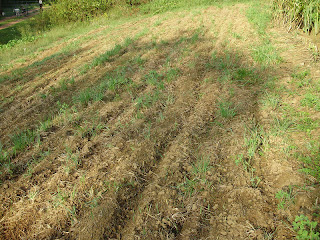 The hillside is steep so I left some rows un-tilled to try and keep the seed from washing away.

As for now our best strategy was to get out there as soon as rain was finally foretasted and get our own alfalfa field going. When I say "field" its more like a patch but we are happy to use what we have and keep clearing as we go. And the wheat project worked so well - remember that we fed the hennies for most of the summer on that wheat patch.

The first step was to mow off all the wheat stubble which was a cinch because it was so darn dry. Aside from mowing over the yellow jacket nest, it went off without a hitch.

The next step was the lime the dickens out of that bad soil. And for good measure I used 19-19-19 fertilizer as well, per the suggestion of my feedstore guy. Those of us in the biz call it "triple 19" just so's ya know. I spread all the additives with a scoop and a bucket trying to get it as even as possible. Then I tilled it all in. I did this on the hottest, driest day possible so the roots from the wheat and the much cursed, ill conceived orchard grass roots would all be killed off. I didn't try too hard tho because some grass in with the alfalfa field seems to be a good idea.

I waited a couple days to make sure the roots and weeds were all dried and dead...then marched out there with my seed. I'm lucky because the feedstore guy sells me most seed by the pound. So I got about 5 pounds of alfalfa. Its expensive but worth it. 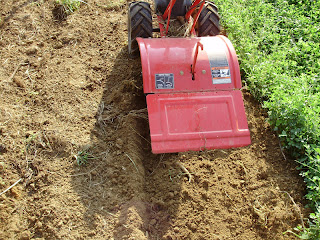 Shallow tilling in the seed.

Now sure if I had a tractor I'd be going about this in a different way, but since there's really just me, a shovel, and the tiller this is how I do it. Pretty much I just broadcast the seed right out of the bucket as I'm walking along. Then I go back and till in the seed very shallowly.

Last step, sit back and wait for it to rain. Which it did the next day. The seeds all sprang right up and then were helped by the warm days and cool nites with a dew. The rain we got the other night will really get things going. Technically your fall planted alfalfa should get a good six weeks of growing before a hard frost. I might have just eeked under that timeline.

Hopefully next spring we'll have a thick, healthy patch of alfalfa just in time for the goaties to freshen. Then all that alfalfa will be turned into beautiful goat milk.

Here's hoping for a late frost!

Posted by Ohiofarmgirl at 9:54 AM

Be careful and watch for bloat when you turn the goats out in the fresh alfalfa.

huh... interesting... So I read the alphalpha article - and being a city slicker - how many years cnayou get out of an alphapha stand. it's cut and come again right?

This will be a great experiment, I am excited to see how it turns out!

We are paying $16 a bale for lucerne (alfalfa) hay here at the moment.

I will keep fingers crossed for your hay crop! The last two years has surely made it hard for so many trying to grow crops of any kind...

So I came late to the party and I have opinions!
It is January and a Saturday and I've been loading pickup loads of hay.
I do not understand why people with horses wait until the middle of winter to buy hay. Do they really think the price will go down in the winter? Has it ever?
Also, no I will not save that exact hay bale for six months. If I attempted to do so you would still be angry at me because after it has been moved 50 times it ain't gonna look like it does now...
Secondly, what is with people selling crappy hay for insane prices on craigslist? It was over ripe crap when they baled it with their pathetic little baler and it was crap when they picked it up two weeks later and it is still crap when you have to did though the stack of broken bales for one 25lb bale to put in the back of your Explorer.
I guess it is good because I no longer have to advertise. Word of mouth works pretty good and it makes me feel good to hear people tell me my hay is awesome and cheaper and being somewhat amazed at just how much hay I can stuff into a 100lb bale. (it is really 110 but saying that scares people)
I feel better now... Thanks....

i'm so glad you have opinions. me? i just keep hoping that the hay farmers will be all, 'hey! its mid feb and i really need to clear out this inventory. i know! i'll have a big sale!'

i keep hoping for that but it never works out. harumph.