Oh friends I knew it was coming..... Have you seen the shocking headlines?

Porkocalypse: Next Year May Bring a Worldwide Bacon Shortage

Say It Ain't So: Bacon Shortage May Be Coming 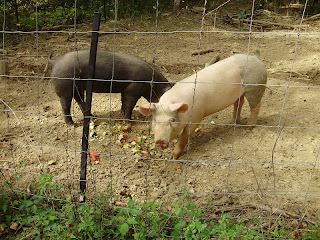 Our bacon supply is safe. No shortage here!

Its the drought, people. The chickens are coming home to roost and they won't be bringing any bacon. Remember how I've been yowling on and on about how the drought is gonna impact everyone. This could be the worst hit to you non-pig owners. Stock up on your bacon now while the gettings good or say g'bye to your bacon fix.

Altho there are a lot of great jokes to be said and a ton of hyperbole to be spun.... all kidding aside, this really is the first wave of food related issues that we'll be seeing. The hard truth is that conventional farmers can't afford the corn and soy to feed their livestock. The price of meat hasn't changed, if anything its lower, so farmers are paying more in feed than what they will make on each head of pork (or beef). Its a losing proposition and no one would be foolish enough to play that game. So farmers are cutting their losses and selling off their stock earlier than normal just so they don't have to pay for the feed. And what incentive is there to take on a new crop of porkers? If anything feed prices will keep going up.

Initially there will be a wave of lower prices but then there will be people fighting in the streets over a package of bacon, so the prices will eventually go up. But since the pork herd levels are so low...there's no big new crop of porkers coming up behind the sell off... folks can charge what they want for bacon and other pork products.

Unfortunately the next wave of larger pork herds will depend on a good corn harvest - which won't happen until this time next year. If we are lucky. If the drought goes on into next year, or we get another spectacularly wet spring like we had before, or some other crazy thing happens and we don't get a good grain crop next year. Well. It could be bad for everyone.

And still the mandates are still in place that a certain amount of the woefully small corn harvest is destined for ethonal production. Food or fuel? When they put these measures in place the idea of food or fuel was widely poo-poohed as an outlandish suggestion. But now look at us. Sure we can make jokes about a world without bacon is a desolate and unfriendly land.

But think about how it all slides downhill.  We might not starve because of lack of bacon. But other people in poor countries will be fighting over what little resources there are left. And what are we gonna say? "Well you know tough too bads for you."

What's the answer? I dunno. Someone smarter than me needs to figure that out.  But for us, thinking about the impending bacon doom, we are so glad we have our own food supply. We figure those porkers are gonna be worth their weight in gold pretty soon. Now who am I kidding? You'll have to pry that bacon out of my cold dead hands.

Raising your own meat, on pasture - and not dependent on expensive grains - seems to be a good idea right about now.

Lots to think about this morning, people. Just for good measure I'm gonna have some bacon today. I know there's more on the way.

Have a good Tuesday, everyone, and get yourself some bacon!

Posted by Ohiofarmgirl at 8:11 AM

I got sticker shock when I went to the feed store last week for 2 fifty pound bags of pig food. My 2 pigs are going thru a bag a week, 2 weeks ago it was $12.95 per bag, this week it was $15.03 per bag. That's a $2.08 a bag increase from 2 weeks ago. I was also feeding a lot of fruit culls since I had easy access to it. Now that fruit season is winding down and the fruit stand will be closing in a few weeks, and pigs are growing and will need more feed it is going to be expensive. I am glad I am only having to worry about feeding 2 pigs.

When the Terminator becomes unemployed, maybe he will take on the role of Baconator, savior of all porcines and the bane of all ethanol producers. Hey, it might make a good comic strip, my second million!

Seriously, you are right. What are we doing feeding good food to automobiles when people are starving in North America , and the world?

It don't make any sense at all! FWIW

Super scary! And I was just reading today about Agriculture subsidies and them not being extended or renewed from what was put in place in 2008. Times are getting scary!

Time to load up my freezer. Some people actually oven can their cooked bacon. I might do more research there. Love the pigz! Pork roast, pork ribs, yum...

Looks like you need to get your own boar and start a replenish-able bacon hard. Maybe a Warg even!

Its only the beginning. Thanks for sharing.

It's a tough place to be... those of us who have a smidgin vs those who have nada... It's a decision I don't want to centemplate.

Fortunately, around our area, the drought hasn't been too bad (Northern VA). Got 2 good cuttings of hay, and the last went to a man running some beef cattle, so I have an inside connection to a source of grass-fed steaks.

I'll have to check on the bacon, however. My wife will not be happy if the supply runs low...

Preach it Sister! Been saying this for months.... Gonna get me a coupple bellys and stock up. Also considering part of a cow, but not sure, I'd have to get more freezer space and I'm don't like being dependant on electricity for my long term food stores. Now to call the butcher...

Thanks, Tombstone... sticker shock is right! We've had some surprises too. Its doubly difficult because the harvests have been early. All the stuff we've expected thru Oct/Nov is finishing up now.

Ian, I'd totally be excited about the Baconator! The hunger problem in NAmerica is bad enough - can you imagine what's goign to happen in poor countries? Sheesh.

Snatch them up quick, Damummis!

I've been keeping an eye on that also Nichole, farmers cant plan if that program is delayed. More salt in our wounds if its not worth it for them to grow anything!

I've seen that Nancy - if you do it, let me know how it goes.

Chai Chai - I've got riders from them wargs for sure *thinks of barncats*. We actually considered this earlier in the year. But you know how I am. I dont think I could have a boar... but the bacon would be worth it. For sure.

Thanks Bec, yep. We'll just have to buckle up for this ride. It is just the begining.

Its tough for everyone, Darius, for sure.. especially for us at the fringe. But thank heaven we can still grow a little something to get us thru.

Hi Avery! Great to hear from you. We are still pretty bad off - I'll be waiting to see who is able to make their harvests or just let it rot in the field. We need to buy one more load of hay - I hope we can find it.

hey Dave! Buying half a beef is a great idea. But yep, gotta have the freezer space. I dont think they do meat lockers anymore - where you can rent space? The used to have those around here.