What we've been getting ready for....

This is why I haven't been around much. We had to get ready. It showed up late on Thursday nite. And stayed. 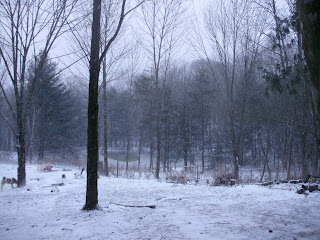 The White Death is here. By the end of the day this hill was covered in snow. In reality we didn't get that much snow. But the bitter cold temperatures had me in a tizzy. We had some very cold wind chills and at this writing, late on Friday nite, we are headed below zero. 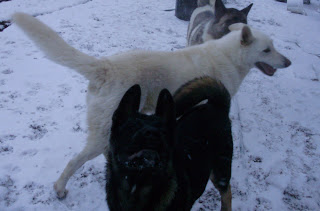 The dogs loved the cold and snow. Especially our little snow face. Zander doesn't have his undercoat just yet so we could tell when he started to get cold. But Kai didn't have one hoot for the blowing wind and snow. She loved it and didn't want to come inside. 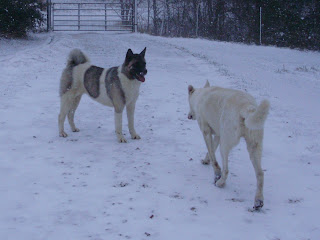 Everyone else was confined to quarters. Even the barncats. If the wind hadn't been blowing so bad we would have let everyone out. But as it was, there wasn't any reason to be outside. Last winter we would have been lucky to only have 16*...but the animals just aren't just used to this cold. We had a beautiful 50* day earlier in the week!

We were really glad we took care of the extra roosters earlier in the week. Having that gang of thugs locked in with the hennies all day would have been a disaster. And the roos would have been fighting all day.

I gave the hens some extra rations, some special snacks, and some hay to keep them entertained. Their water didn't even freeze so I knew they were warm enough. The ducks and geese were doing just fine but I made sure they all had fresh straw so they had somewhere dry to stand. The meat chickens were just fine, they had a couple heat lamps.

Debbie the goat seemed like she was a little chilled. We fixed her up with some B1, molasses, and Nutri-drench. Of course, they had a little extra bagged food, warm water, and all the extra hay they could eat.  Oddly, it was exactly at this time last year that we also had to fix her up. This pattern seems to be repeating so I'm thinking that it has to do with her pregnancy. Nibbles and Dahlia were just fine and didn't seem cold at all. We put up some tarps around the goat house to give them  more protection from the wind which seemed to come from a strange direction. Later in the day Debbie seemed to be just fine.

The weather guy is just now saying we've got another cold day on Saturday and another really cold night. Looks like Saturday will be more of the same. Everyone will be inside - including me. I've got sloth and can hardly move off this couch.

Happy Saturday everyone! Are you keeping warm?
Posted by Ohiofarmgirl at 6:30 AM

We're in NC and hit 24 degrees last night. (Yep, I'm rubbing your nose in it. Grin.) My dogs seem fine with the cold suprisingly but I still call them in after a few minutes. Casey, (my 75# piglet of love) has NO body hair on her belly at all. I've often wondered about frostbite on dogs.

Same here. I was out multiple times a day yesterday making sure everyone had water and it wasn't frozen. Extra bedding and food all around, and then I hillbillied up the new chooks that are in temp pens to make sure the wind wasn't getting to them.

Monday's supposed to be up in the 40's here.

I've got the next 9 days off! Projects and cooking, and sausage making and more bacon, salmon and and and..... Stay Warm!

It's cold here in NC also..and I'm definately trying to keep warm..we are using the fireplace in the big room and the Studio is being cared for by the new Heater :o) when the temp falls in there it automatically comes on..it's toasty as can be and I'm loving it...especially being in P.J.s :o) At least the suns out today even though it's cold..Cecil fed the crows (they are our chickens :o) and gave them fresh water,so all is well here too..

Brrr, we are feeling the bitter cold here as well. Just enough snow to cover the dirt...err..mud. Single digits at night...then back into the mid 40's next week. Crazy weather here too!

We seem to be getting your weather a couple of days later....it is going to be frigid tonight, and the wind chill today is getting uncomfortable. My roosters are caged up now and heading to freezer camp this afternoon....it is already peaceful out there with just one rooster for the couple dozen hens. Whew. At least the days are getting a little longer now!

We got a little snow too! It looks like you got more. Although we were excited because it finally feels like winter!

Still nothing here in NV. Small chance of rain by end of next week. Don't envy your wind though. Brrrrr.

Cold here in GA too. I believe we had temps in the 20's for the last couple nights. Three heaters going all night long.

Hey Tami! At 11* this morning yes I'd take your 24*! Yep dogs can get frostbite - but I think its more likely to occur on ear tips, noses, and paws. But bring that pup in and give him snuggles and belly rubs just in case!

Nine days OFF! What kind of slacker are you? ha ha ha ha just kidding, friend, I expect a full report of all your goings on. I'll be checking our blog.

Ginny, I was thinking about your new fireplace. Keep warm and feed your "chickens"! :-)

HDA - We'll be out of this cold soon also but geez, I've just about had enough.

Hey Free, I'll be checking your blog later to see if you've posted pix of them chicken feet. whoot!

It feels like winter out there, Vanessa, for sure.

All the better to run in, Sonja, enjoy that sunshine!

Becky, I always wonder what happens in the south when it gets cold... is it all the news?