This morning it was 0* when I took the dogs out. So today my plan is to do exactly what the temperature was.. nothing. So I thought I'd show everyone's Ginny's chick!

Remember a while ago we had that funny hatch and I started handing out chicks.. well, really I was just assigning some folks a chick? Ginny, from over at Gingergbread's House, got a beautiful chick - I knew she was a hen when I first saw her (the chicken not our Miss Ginny).  So, here she is... 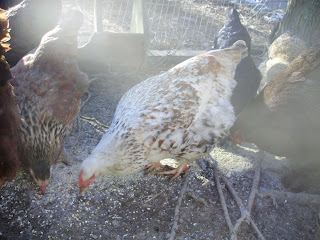 Isn't she beautiful? We had funny lighting that morning but the chick, named Ginny, is just a stunner. I love her lovely speckles.  She is the softest white with pale brown, and non-feathered legs. She's got a beautiful shape. She'll be "heavy" and wedge shaped and a good layer for sure. Some of these young hens are starting to lay, but we haven't been pushing them. In a few weeks, tho, we'll start to see things pick up with the longer days. 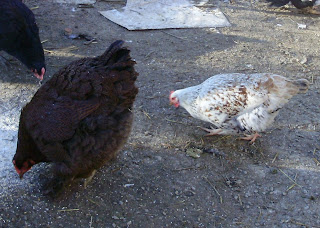 You can see that she's not as big as some of the hens. Here she is with Raspberry, my beautiful brown-red Cochin hen. Ginny the chick also has the "right" number of toes. Many of this hatch came from one of the Salmon Faverolles, which have a fifth toe. Its kinda freaky but I don't mind too much. 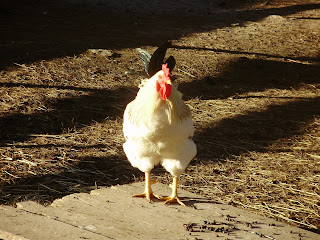 This will probably be her rooster.... he's yet unnamed as he just got a pass on Rooster Day last week. Look how beefy he is! These light brahmas dress out beautifully. The only drawback is that they have this kind of weird "single hair" feathers...long thin wisps. If they are missed during plucking I just singe them off with a lighter. Easy peasy.

Today the sun is out and all the troops are out in their yards. Its started cold but is now a balmy 20*. Everyone had cabin fever from being cooped up for the last two days so they are out enjoying the sunshine.

I still have sloth and am parked by the fire with Nicholas. The weather will break on Monday or Tuesday and then I"ll get busy but until then..... I'm gonna just sit here by the fire.

Happy Sunday everyone!
Posted by Ohiofarmgirl at 12:38 PM

That's the best looking Live Hen I've ever seen
she is a nice healthy looking hen one too :o) and I'm sure she will be putting out some nice size eggs, .I kinda like that Roo...so she should too :o)..

Wish I had chickens!!

All my chickens look the same so it must be nice to be able to easily identify them. I can't wait for the longer days either, more than just the chickens have work to do around here.

I'm still looking for some first hand information on how you live those Salmon Fav chickens.

I was so totally thinking that last picture looked like some seriously good eating and then thought how insensitive that would be to say about someone's pet rooster. So funny you were talking about dressing him out.

Glad everyone got out in the sun! Looks like it was a nice day. Ginny's chick is gorgeous!