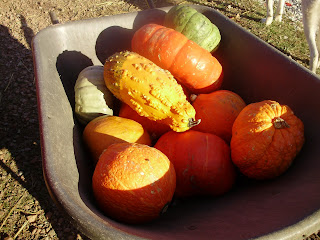 Firmly in the category of "It never hurts to ask..." Wow! I got two shopping carts full of pumpkins at the grocery store yesterday. For FREE!

As I walked in I noticed two carts full of various and sundry gourds, pumpkins, and squash. They obviously didn't belong there so I moseyed over to the Customer Service Desk and asked if they were giving them away? The "customer service" person sneered at me and told me I was out of my mind (in not so many words). So I moved on..

And then I saw the produce guy. "Say friend, what's with the carts of pumpkins out there?" I casually asked.

"Well, they are gourds and they are free."

Completely unconcerned he just said, "Yep. Take them all."

Of course my eyes bugged right out of my head because:

1. They were FREE. Two shopping carts worth!

2. I was a little dubious of a produce guy who didn't know the difference between a stupid gourd and prize winning, pie making blue hubbard squash!

But I wasn't about to correct him so I ran right out there and pushed the carts over to the big truck and loaded them all up.

Talk about a great day! Not only did a score several free meals for them pigs - I also now have a huge supply of seeds just for the scooping. Not to mention I have some fabulous blue hubbard squash that have "pie" written all over them. What could be better?

I'll tell you what's better...... the puppy is so darn cute. Check him out sitting in the sunshine: So is everyone voting? Doesn't matter what side you're on, get right out there.  Don't think for a second that your vote doesn't count. Take the time to stop by your local polling place and cast your vote.  If anything you're making it known that We The People want to be heard.

Wow, squash for *free*?! That would never happen around here....
I could just about swear that Zander looks like he is on patrol in the last picture!

GREAT score! I too scored some free pumpkins yesterday...just for asking. I got 10 BIG old pumpkins. I am going to stop in and ask if he wants me to take the rest off of his hands as well. Never hurts to ask.

Look at all that gorgeous free food! The pigs can eat those gnarly gourds, too, if you don't have a use for them.

Free squash, you can't beat that. Zander does look like he was raised to be a proper young pup...more likly he is looking around trying to find the next victim of his puppy attacks.:)

Sweet, free is always awesome. Just cooked down my first pie pumpkin a couple of weeks ago. Chocolate chip pumpkin bread was the hit of the party.

That puppy looks so handsome sitting up so proud in the sunbeam. big sister Kai is clearly doing a fabulous job. :)

Congrats on your haul.

Voting - yes, just do it. When I was an early teenager, our little town was dry. The election came in an attempt to reverse that law. My parents knew the towsfolk never admitted to drinking, and it was late in the day and we were still working in the fields. Dad decided it was time to freshen up and make the family trip into town to vote. The next morning we were suprised to hear that the new proposition passed by TWO votes - in a town of tee-totalers. Had my parents not gone, it would have been a different story. Your vote does matter and your vote does count. A valuable lesson learned at 13.

Did you happen to drop one on the toe of the rude customer service person? ;)

Great find! How ever did you know to ask?

I'm spending a little time checking out new blogs, so i thought id stop and say hello to you folks. Richard from the Amish community of Lebanon Pennsylvania.

Isn't he regal, Autumn? He's learning how to be a tough guy from Titan.

Thanks Justy! 10 big pumpkins is awesome..and yeah he probably will let you clean him out.

Yep, Free, those were the first to be thrown in. We threw them at a stump so they'd break. Totally worked. Whoot!

You said it, Mr. H. He's really snugly right now- its a funny stage of his development. He finally recognizes us and is all wiggly when we "magically appear" from out of his field of vision.

CBH - that is the best voting story EVER. thanks for sharing!!! I've participated in a couple votes where the difference was just a couple hundred votes. As you know, every vote really does count.

Ha! Tina, nope, but I did send an email to the store thanking them for the produce guy. (even if he didnt know it was a squash!)

Your puppy is precious and congratulations on all the free items. I love free too!!!

WOW! where were you in my young energy days :o) I was always looking for that bargain , taught hubby and now he runs it in the ground, he wants discounts for everything, and anything time of day his age, good looks, whatever he can think of...even compliments ugly people how good they look :o)...Yes, your vote counts and that's the first thing we did this morning before getting into "greens to harvest".. Zander is a nice looking pup.

I Have 4 chain food stores in my area, all of which I have asked to take off their hands what they can not sell. All of them had the same story, that there was a man (some where here) in Washington that was getting that kind of stuff from the store for his pigs (which is what I want it for) was told it was not ok for people to eat anymore. For some reason he ended up eating some of it and got E. Coli. Sad right, well then he turned around and sued the store he got it from and won.... Now they wont let any one have it for fear of being sued.
I know of at least two family owned produce stands that I am going to talk to next. But glad to see that some places and people are not soured!

You really can't beat all that free squash.

The little guy is really getting big. He is going to be one handsome big guy!