I tell you the truth, I am good in a crisis. Its a family trait.  My people are all handy in the face of adversity, calamity, or general mayhem. 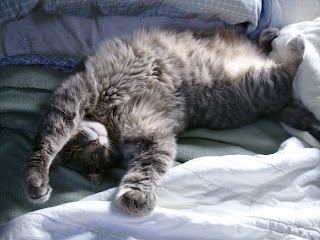 We don't flap, flinch, or stand there gawking when action is required. And I'm bossy so that helps too.  I tend to think quickly and I figured out a long time ago that people respond if you talk fast and with authority. So if you find yourself in a crisis, I'm the kind of person you want running up on the scene evaluating the situation, barking orders and springing to action.

So there I was fresh from town where I had lunch with my pal, L. last week. I was ambling along out to close the gate,  happy as could be. Until....I heard before I saw our inside-only cat, Nicholas. Outside. In the yard. Yowling and coming right to me.

I completely freaked out.

Not "oh golly would you look at that" or "wow how'd that happen"....I mean to tell you I completely became unglued and started screaming hysterically. And I did absolutely everything wrong for that situation. Not only was I screaming hysterically but I started running at him. A cat. I can tell you this for a fact, no cat will ever come to anyone who is screaming at them.  Least of all if they are screaming and running right at them.

Especially if there are three huge dogs and a puppy also running right at them. Nicholas took off like a shot. It was total chaos. There was running and a lot more screaming.  And then even more running and screaming while carrying a puppy. It was so bad that Dog#1 practically had to shake me by the shoulders and slap me to get me to pull myself together. 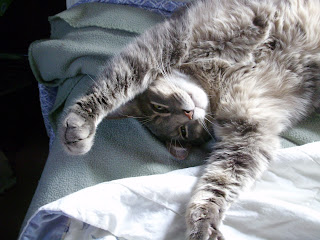 At one point I actually ran into the house and started screaming for Nicholas just in case there happened to be another distinctively marked 18 pound Maine coon x raccoon in the county - and our Nicholas was actually in the house. He wasn't and that was no impostor outside.  I ran, screaming, back outside. This time without the puppy.

Just to add a little color to this discussion, the inside cats never go outside. Ever. There are a lot of reasons for this - coyotes, disease, that mean gander. So the last time any of the inside cats were actually outside was the second before I scooped them up and saved them from a life of vagrancy. In fact, I had just smirkily told our Good Vet that our inside cats never EVER go outside. I was very proud of myself. Until.. you know.. there was Nicholas out in the yard.

Meanwhile, outside, the hens had started to gather to watch the fracas. After a couple laps around the garage Nicholas darted under the big sliding door. I locked down all the doors and ran into the garage just in time to see the barncats, Shine and Bobbi, corner him.

Nicholas dove for cover behind the haybales and promptly got wedged in between the hay and the wall. Stuck. Like a cork. A screaming, growling, hissing hell bent on killing someone or something cork...that is, if he could have gotten free. But he was stuck.

All kidding aside, Nicholas is pretty big. And fiesty. I've had a cat bite before and I know they can be nasty business. So I really wasn't looking forward to reaching into the blender that was a huge hysterical cat wedged in a dark and scary place.

Having regained some command of my facilities I turned to reason and decided to ratchet it down a few clicks. I started talking to the enormous frightened cat in my singsong voice. He stopped yowling when I sang "...and I'll give you all the tuna in the world if you just calm down...."  That got his attention.

I reached in and pulled the great cat free. And ran with him directly into the house.

Of course I did the obvious "next step" which was to call up The Big Man at work and scream at him hysterically. Then hang up. We all felt much better after that. Being a brave man he called back in about an hour to make sure everyone was OK. We were.

After the promised tuna I carefully checked Nicholas all over for bites or scratches. In truth, he probably was just out laying in the sun in the garden. He was fine but I kept him in the bedroom for a while just to make sure. 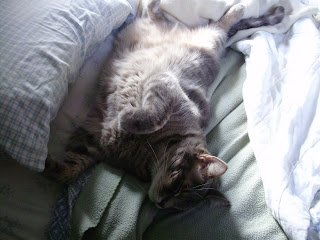 However once Nicholas figured out that a dramatic performance leads to more tuna he really worked it. Several cans of "the finest white albacore money can buy" later he stretched out his great frame and went to sleep. That's the way Nicholas.... sleep there on the comfy bed and dream no more of the Whole Wide World. All the activity made for a hard day indeed. The sixth of such.

Laughing...I can just see you running at the cat screaming with your "posse" of dogs. Poor Nicholas. (Tuna works wonders at my house too.)

I tried to keep my cat, Kiki, an indoor cat when we first adopted him. Lasted 6 months. He finally got smart and hid underneath the dog as I opened the front door coming home from work. He was off like a shot. That's when we got the cat door installed. He's never missed a meal, I'll give him that and now that he's older he's sacked out sleeping inside more often than not.

I once had an orange tom I named Dart - because every time the door opened, he darted out. He learned how to pull down the handle on the back door and let himself, and the dog, out. I'd love to have an inside cat who likes to stay inside.......

Like many cats, Nicholas has figured out how to get the really, really good treats! He's got your number, girl!

Ha-ha-ha!!! "decat" is the word verificatin for the next comment...so I just had to.

Holy Cow! I too would have come unglued at any of my 3 girls being outside.

Let me tell you a story. My honey and I moved my grandmother in with us after my mother died this spring, and she forgot about our cats being strictly indoor only. Well long story longer, our youngest Lily got out. Thankfully, she came right back in. I found out this story after I came home from work that day. It still caused some hyperventilation.

Poor Nicolas, he may never recover from this one without more tuna.

Sometimes I have to read closely with you and your stories! I'm wondering if your pulling my leg for some enjoyment ..or you've had a dream you want to tell..or it's one of your fantasy tales ...you lead a story tale life.:o) with lots of excitement...thanks for this one, especially for a Monday :o)

I know why Nicholas was outside. He was looking for Miss Banana! They could twins.

My cats are primarily inside cats. They do go in and out a few times a day. But they stay close to the house.

When I lived on the farm, I had three pet cats and about a dozen barn cats. Miss Banana & Sparticus would go outside. Alvin was afraid to go out there. The barn cats never bothered my babies.....except for a huge feral orange and white monster who would occasionally visit. He was a demon and was quickly put to rest under a nice big rock.

Well aren't you blessed to have a dog that can take you by the shoulders or slap you?

Thank goodness cat's are too proud (lazy?) to learn to read, as "Reading is for servants".

If the Posse learns that you think they are actually afraid, let alone have even deemed to notice some unnamed over stuffed feather pillow (so called mean gander), they will all go out enmass and dine accordingly.....after a long second breakfast nap...and tongue bath...and sun snooze...and what were they going to do?

Hey Tami! We think we figured out how he did it.. Nicholas found a way to pop the storm down open. So we fixed it. Now he's mad...

KC - You couldnt get our Little Mo outside if you tried.

He's totally got my number, Free - and he works me like a part time job.

Sonja - can you believe the things they get into? Or out of?

Hi Ginny - most of this stuff I couldnt make up if I tried....

Robin, I totally laughed - he WAS looking for Miss Banana! We had a scary barncat like that too - Dragon. But we uh.. "fixed his wagon" so to speak.

Rkbsnana - you should see him drive the work truck! ha!

CC - Little Mo is reading this right now. I have a suspicion that he is in cahoots with your felines.....
;-)

One of the funniest postings I've read. I could totally relate to all of that. We have three inside only cats, and they have literally always only been inside (one for 16 years) and if I saw one outside, I'd perform exactly the same way! Glad he's back "home" in the house and happy. A happy cat is a good cat. :-)