Breakfast and The Bubby

Whatcha having for breakfast? A dry bagel? Cereal bar? Nothin'?  This is what we had.... 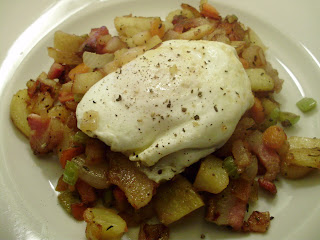 .... that's right. That's our bacon and our egg and look at all that lovely hash. The house smelled like breakfast heaven.

So we had an eventful weekend. If you're over on facebook then you know that we had a puppy-emergency.  On Thursday morning our Zander woke up fussy. By Thursday afternoon he woke up from a nap and his little muzzle was swollen and it looked like he had half a golf ball in his mouth. As soon as I saw it I called the best dog dentist in 3 states and had booked an appointment for the next morning. What an ordeal!

Amid speculation that his sister, Kai, had shoved a green bean - or a Barbie shoe - up his nose, we left our Zander in the able hands of the dental vet. It turned out that he had broken all 4 of his canines and they had become infected. The swelling was from a very badly infected upper canine. After an hour of surgery on Friday he was right as rain. Saturday morning we got our pup back and everyone was happy. Well. I mean, I had a nervous breakdown but I'm recovering.

We were shocked by all of this and wanted to know what happened? How could all of his canines be broken? The vet wasn't particularly surprised at all. She said we just have a big rowdy pup - with tiny, hollow, baby teeth. Too much force exerted on too small teeth = broken teeth. The big concern - aside from the infection - was that the bad baby teeth would impair the proper development and growth of the adult teeth.

Originally I wanted to just take him to the dog dentist and really wish I would have done so.  The crippling dental bill was my tax for not following my first instinct.  A good lesson to always follow your gut. Had I taken the pup directly to the dentist with the first tooth she probably would have saved him from this infection. And he probably would not have needed all four canines removed. Lesson learned.

But all's well that ends well. Our "bubby"*** is back to full speed and this never even slowed him down. The big news was how big he is!  He weighed in at 55 pounds on Friday. At 4 months. Wow!  On the way home we stopped for a coffee and there was a woman with some kind of small "hand dog." I was gawking and she proudly said her little rat.. I mean.. dog was 4 months old. And yes, I was compelled to tell her that my dog craps bigger than her dog. Luckily she laughed.

That's the story here. We are going to try and get back to normal.  Such as it is.

Happy Monday everyone! Any one else have a nervous breakdown over the weekend?

***Why "bubby?" Well, everyone around here has a nickname. We called Kai "Curly" or "Wiggles" and we randomly started calling Zander "Bub" as in " Hey Bub! Whatcha doing?"  So now he's The Bubby. Who knows where I get this stuff.
Posted by Ohiofarmgirl at 9:39 AM

God only knows where you get it all, but I guess it's given to you to give to us, your just a riot :o) that makes life pleasant ..and we give a hoot :o)

Sorry for your ordeal, and the pup's.

Invariably that kind of thing happens to me when I neglect that still, small voice we call 'gut instinct'.

So the Doggie Dentist put the bite on your wallet!
I'm glad there was a happy ending. Our animals really become part of the family, don't they?

By the way, if you ever capture the scent of that breakfast in an aerosol spray, let me know. I want some of it!!

Breakfast looks great!! Good to hear Zander is on the mend.

Breakfast looks yummy! I had a fried egg and two whole wheat banana pancakes. Glad your pony *oops, I mean pup is ok!

Glad he's better now. I do not want to imagine that bill. He's one lucky fella, in a lot of ways. :)

Well who knew puppies have baby teeth anyway? Not me. All's well that ends well and I'm really glad you're recovering from your nervous breakdown.

Sure glad it worked out for Bubby!

Ah thanks Ginny, I'm so glad for your hoots!

Thanks Darius, and yes, that still small voice knows a lot more than I do.

Hi VPAK! Yes, it DID put a bite on my wallet...and I'm fairly certain the dog dentist will be driving a shiny new sports car - thanks to the Bubby. wow! I'll work on that smell-i-vision for you. ;-)

Thanks Gina! Good to see you here.

Hey GW, the pony.. I mean.. puppy is doing great. You can't keep a good Bubby down!

Thanks Tina, we think we are the lucky ones.. we got the best one of the litter for sure.

Hi RKBs! There's a lot of mystery to a pup for sure. But I think they gave him some fertilizer... he's bigger already!

Thanks, Dave, it was a long weekend for all of us. But now we're all on the mend - including me.