The first thing I did after we bought this property was to tell Dog#1 to "Go Watch the House." So he did. 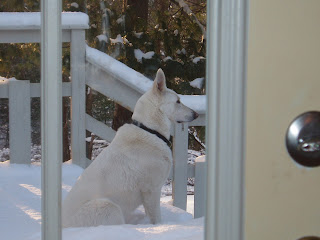 He went out on the deck, sat there, and commenced to Watch The House. Titan didn't just meander out and flop down - he intentionally marched out there, took up a strategic vantage point, and watched. Good dog.

The other day Kai and Zander were goofing around inside a little too vigorously. So I told them to "Go Watch the House." So they did. 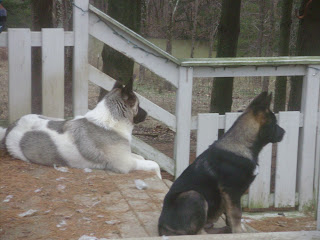 Zander was a little nervous at first, and the weight of the responsibility seemed a little much for such a young pup to bear. But then he sat a little straighter, held his head a little higher...and watched the house.  Good dogs.

I think they are watching the goings on in the barnyard. But Kai takes this very seriously. She's not just laying at repose... this is her guarding stance for the house. She always sits in the same way in the same place. No fooling around. Since we got Zander she's taken on a new role. She's not so much the goofy puppy she was just a few short months ago.

Bringing Zander into the pack has really given her a push into a different position - with other jobs. She's been helping me round up the chickens at night and I've even sent her outside to "go bark at something" - which is normally Titan's job. She's also spending a lot of time with Zander - to wear him out - and mostly to teach him how to behave.

Even tho we give our big dogs a "reverse time out" so they can get some peace from the pup all of the dogs still spend a lot of time together.  Aside from being cute and getting lots of rest, Zander's most important job right now is to figure out how to be with other dogs. All of the dogs will learn to work together as a unit - and also separately as individuals.

Now that the bad weather is on us and there is a lot less time to be outside, so we are working with the dogs to learn more difficult commands. And they are learning to accept commands as individuals in the middle of a group.  This gives them a lot of mental stimulation - and keeps our tight ship running smoothly.

For instance today we played fetch with two balls. Lucky got to fetch the ball assigned to him and Titan got to fetch the other ball. Kai and Zander don't understand the fetch thing - but they like to run with everyone. This actually helps the learning process. Ti has to focus on us to see when he gets to fetch - even tho The World's Most Annoying Little Sister is bouncing all around and Zander is trying to bite his tail.

And then within all this activity the dogs are sorting out their pack order. Sure Kai can run with Ti to get the ball, but she can't grab it or get in his way too much. If she does, Ti puts her in her place. She has to respect the order of the pack. And no one, and I mean no one, ever jumps up on us to get a ball. Even little Zander has learned that good dogs sit and then they get toys (or food or loves). Zander likes to carry around his own ball and show the other dogs. But he's also started to bring it for me to throw for him...when he isn't rolling it down the hill to chase.

When we are done playing fetch we all go and get a drink and the dogs have to give up the toys and head inside. As we are walking in they look to me for their assignments, "Ti, you can stay out", "Kai and Zander go up on the deck," "Lucky come in the house." I do this by looking at each dog, saying the command, and pointing for them where they should go.

Zander has really learned this well. At first he'd just take off running. But after I stomped after him and carried him back like a sack of potatoes a couple times.. well.. he figured out just to pay attention and learn the commands. He's also learning to look at me for direction. This is great - I'm already working with him to learn hand signals and not just vocal commands.

We are also working on individual commands in the house. I'll instruct which dog or dogs may come out of the gated dog area and into the living room or the kitchen. This way I'm not trampled by a herd of dogs....and they respect that we "own" the house.

Learning to function both as a group and also independently is really important. This enforces that we are the boss of them, refines their discipline,  and also helps me get my work done. "Lucky go and scoot that chicken in, Kai stay here with me."

Happy Monday everyone! Did you all survive New Year's eve?

Wow!! I am very impressed.

I would love to see your pack in action! Any chance of a short video? Can I send Biscuit to boot camp at your place? Hee-hee!

This is the place for great dog training information. I love the command, "Go outside and bark at something!" Specific, but leaves a little wiggle room for creativity.

Sara love to go outside and "watch". I hope the new pup Molly picks up this trait, I think it keeps the livestock in line.

You have your hands full Sargent Major :o) and doing a terrific job..I can see Zander is really growing up fast and Ki is a beauty... what kind of dog is hs?

Iim impressed as well. Where did you learn to train the dogs?

Zander has sure gotten big!

Thanks Rkbs.. its a lot of work. But totally worth it.

Hey Free! If we had Biscuit over I'd be afraid Nicholas the cat would go after him!

Thanks CC - how are you doing with your young pup? Sometimes I tell the dogs to "go and do something.... THATS NOT DESTRUCTIVE." you can almost hear them say "oh man....."
;-)

Thanks Ginny - its helps that I am very bossy. ha!

Hi Dave! Mostly I'm making it up as I go... but really the Monks of New Skete have a great book called "How to be your dog's best friend"..and also from a very good vet who gave me a shove in the right direction. And from my pal SD who's spent the last couple years convincing me that I'm a dog person. There. I said it. Me = dog person. Sheesh! What next? That I love the goats!!?!

I can't believe how big Zander is getting!

I'm not really a dog person. But, I do appreciate those who actually train their dogs. My best friend used to train dogs and I really enjoy her dog. It's those people who think that their dogs are people and the dogs run the show. What are they thinking! We train our children!

Nice job with the pack! A video whould be great!