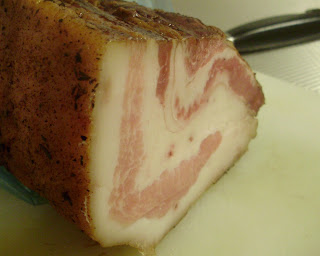 Technically this is a smoked pancetta... such as it is.  Last nite I smoked the bacon that I started curing back here.  It was magnificent. I used the instructions from Ruhlmans book, Charcuterie: The Craft of Salting, Smoking, and Curing

and also followed along with my friend David the Gastronomic Gardener and voila - bacon!  Don't think you can make bacon? Yes you can!

I don't have pix of the smoking mostly because I got started after it got dark. How hard is it to smoke your own bacon? Not at all. The hardest part is making the fire. I tell you the truth I cannot start a charcoal fire with a bag of Kingsford and a gallon of lighter fluid. Don't ask me how I know this. So I gave up on that malarkey and started the fire how my people have been doing it since the elder days. With wood. Easy peasy.

I come from a long and glorious line of pyromaniacs so while I couldn't get the charcoal even if the main development guy from Kingsford was holding my hand... I got a decent fire started with wet kindling and a single match. I let the fire burn down to coals while we did chores. Then I tossed on some mesquite chips, some trimmings from the pear tree, and some kinda other hardwood we had laying around... and commenced to smokin'.

Pretty much the smoking part involved me sitting on the couch and watching a movie. From time to time I got up and added more wood chips and trimmings to keep the smoke and the fire barely going. After several hours (maybe four?) the internal temp of the bacon reached about 150*. Then it came out of the smoker and went into the fridge.  And I went to bed.

This morning I had bacon-y goodness and a stellar cup of coffee. I'll be slicing up the bacon - and keeping some of it in chunks for cooking - and then putting it into the freezer. How easy was that?

I've got some other pieces curing in the fridge downstairs and one pancetta hanging in the basement. Next week I'll try smoking it during the day so you can all see. In the meantime, see ya next year!

Posted by Ohiofarmgirl at 11:55 AM

Happy New Year! How did you smoke it in a kettle grill?

Yer killin' me, OFG! My bacon goes to be smoked on Tuesday, finally. I am reserving a few odds and ends in case we get organized enough to smoke some....and hopefully, by next winter, we will have a smoker and keep our money in our pockets! You rock!

Yummy!!! Thank you for your confidence in my abilities but I fear I could not do it as well as you. Happy New Year to you and yours.

I'm slobbering on myself, just imagining how good that must taste :o)....it sure looks good and tasty..I'm jealous. :o(

This is definitely something we have to try!

Tip: Do not start charcoal with lighter fluid. Just ask Santa or The Big Man for a charcoal starter...or make your own. Then all you need is a couple of sheets of some newspaper! No nasty chemicals!

Happy New Year to you too!

Hey Dave! I have two different smokers - for whatever reason. One is a barrel and one is a kettle

thanks Rks - but really, you can do this!

Robin what a great idea... I think I've even seen one.. maybe we have one.. hum... and yeah, that whole lighter fluid thing just gives me the heebie jeebies.