Oh Deer, Why We Need Kai

The beans I planted outside the gate have been doing great! Just about every day I go out there with the water trolley and the hoe to keep them weed free and watered. And I got my first, nice bucket of beans the other day. 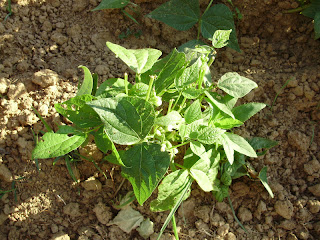 Then this. Deer. They got my beans. And my sweet potatoes. See how the beans are razed across the top? This bush used to be about 2 foot tall. And full of beans.

You could say this is what I get for planting anything outside the fenced in area of our property. But I'm still mad. I didn't think the beans would grow out there because the soil is so bad,  but wow they went like gangbusters. 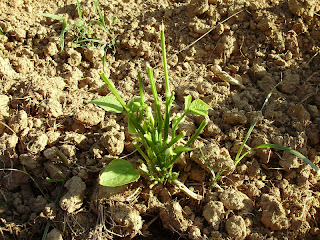 Now this. So this is kind of disappointing. Oh deer. Around here they are kind of a pestilence on the land. We call them land rats and rejoice when hunting season comes around. Gene Logsdon had something to say about there a while ago.  Most nice folks just about burst into tears when you tell them how much damage deer cause to crops and how dangerous the roads are around here. But its not so hilarious when its your car or truck that's in a crumpled heap in a ditch. Or your beans that have been nibbled down to nothing.

Usually the deer aren't a problem for us within the fence. Back when the Old Man Neighbor had something to say to us he was always telling me that my field fence wouldn't keep the deer off our property. I'd always tell him that I wasn't foolish enough to expect the fence to keep them out - because this is how we keep the deer away around here.  Kai is our best hunter and she hates the deer. You should see her in action, she is a vision when she's got her hunt on. Zander will come into his 'hell yeah' soon enough and the two of them will be a lethal combination for any varmints who cross our lines.

If you don't have big dogs you can keep the deer out by either building a really tall fence - or by installing a double fence, like our dog moat.  The fence has to be tall enough so the deer can't jump over it - or low and wide enough part that they can't jump across it. For now I just need to figure out a way to get some netting over these beans to try and save them. Stupid deer. 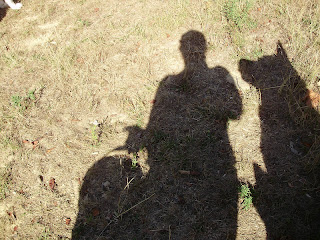 Me, a bucket of beans, and My Fighting Uruk-Hai.. My Kai, my best hunter.

Later this fall we do another fencing project out where the beans are.... but not to keep the deer out. But to give Kai more land to patrol. My Fighting Uruk-Hai.... More feline then canine, she hunts the herds silently. Bring them down, Kai, bring them all down.

Any body else have their beans demolished by stupid deer? Drat.

Happy Tuesday everyone - lets all go find some netting to keep the varmints out of the harvest.

Posted by Ohiofarmgirl at 7:39 AM

Stupid deer! Well, they are getting nice a fat so I hope you fill your freezer this fall.

Wowza, nice self portrait! Gorgeous Kai, and look at those broad working-woman shoulders on you, girl! Calls to mind the capable wife of Proverbs 31:17...."She has girded her hips with strength, and she invigorates her arms."

thanks Free! folks ask us why we don't hunt and we usually tell them thats its just easier to call something over to the fence of our barnyard than sit in a tree all day... but i dunno... i got the vengeance on me. Bean Retribution 2012 could get ugly.

and ha! yes thats my favorite verse!! one of the translations i like is:
She sets about her work vigorously; her arms are strong for her tasks.

i got me some strong arms!
:-D

Deer ate my edamame last year...nearly killed me. So far ( 7 years) we'd had no problem with the critters...arrgghhh...I feel ya, sister!!

I farm in Ohio and am plagued by deer problems too. My beans look just like yours do right now. It's so frustrating!

Greetings from Pennsylvania folks. Richard from the Amish settlement of Lebanon,pa

OFG!!! You look exactly like I pictured you. LOL That verse is a fave of mine as well. THE self sufficient woman!

Kill them ALL!!! Those tick carrying varmits are destructive ! Every tree I plant gets attacked and scraped by horns !I even put up fencing around the trees, but they tear it down so they can eat or scrape their horns on them ! Kill them all ! Kill them all ! (one more time for the militant animal rights activists) KILL THEM ALL !! thank you and have a blessed day .... :)

I had a little bit of nibbling on the corn and the beans. I heard that stringing fishing line like a fence around your garden will work. They say they don't see it and it spooks them when they run into it. I haven't seen more damage. Of course, I also put the mounds of dog hair that gets swept up out around the fence and maybe I've peed around the perimeter a time or two, but that hasn't been confirmed ;-) This morning I saw a groundhog frolicking in the pig pasture which is right next to the garden. I have my eye out for him.

hi Akannie! and welcome! sorry about your edamame.. isnt it so frustrating?

Thanks Richard, and welcome!

Damummis - or did you think i was taller?! ha! and yep.. the Hymn of the Good Wife had a ton of wisdom in it. a good word for everyone.

Thats what I'm sayin, Anon(2)... we need a year round hunting season.

JJJ - *cut to scene, OFG tangled up in fishing line, having to be cut out by Dog#1.....* ha! well the dog hair works for rabbits and such. a good reminder - all my guys are blowing their coats. i could build a whole other dog with all the hair flying around here.

Dad gummed varmits! I hear they are delicious

they are delicious, Dave, especially since so many of them are corn fed around here. or green bean fed, such as it is. ]
;-)

Thanks Phillip! I've got your email info. We'll keep you in mind.
:-)

I have medium weight row cover over all my bush bean plants in the plot next to the woods on my property. I have to take it off every morning and put it back on every evening but they won't come near them! My husband was skeptical but it really works!