Ok I know its not officially "mid-summer" but we're rushing headlong into the end of summer and a lot has happened.... with more to come. 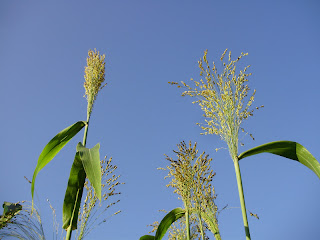 Of course the weather has been the big story. We've been spared tornadic storms but that derecheo really walloped us. The drought, however, has taken center stage. Last year we were drowning in too much rain but this year its dry dry dry. We've also had ridiculous heat - something like 34 days above 90* and no real "normal" days. We've also had very little humidity. To the point where I'm pretty concerned. I come from a place without steamy humidity so while I'm enjoying the swamp-less air, the growing season has really been affected. 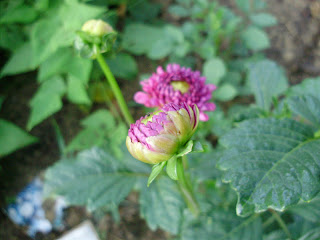 The dahlias that I really love. Not the goat.

Don't think for a minute this isn't going to affect all of us. More than half of the corn crop is suffering and its worse in other states. The one-two punch of course is the law requiring gas to contain a certain percentage of corn-based ethanol which is keeping pricing even higher. The obvious solution is to get rid of this mandate. But what do I know?

Feed prices are already going up. A couple years ago we could get a 50lbs bag of cracked corn for under $4. This last week it went up to $9.35 and its only going to get worse. We are considering getting a ton of corn just to "price fix" before it goes even higher. As it is, every time we drive past the feed store we pull all the money out of our pockets and buy what we can. 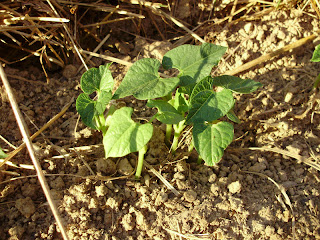 I'm starting another round of beans - they are flying out of the ground.

The feed burners... that is... everyone out is the barnyard are doing great. We've had a few losses but mostly just a few of the grand old gals in the hen flock. We haven't let any of the hennies set nests until now - the heat is just too much and we are striving for a more reasonable number of chickens, especially with feed prices so high. For now the clucks are doing a great job free ranging but when winter comes it will be a different story.

The geese are doing a great job of finding grass to graze where they can. We've been trying to keep part of the yard watered for them. Cindy never hatched any babies but the gaggle seems to be doing ok. 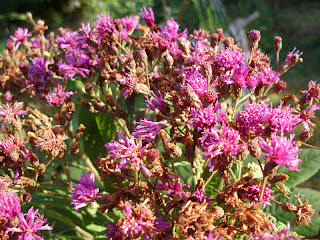 I know its a weed but I just love this - Iron Weed. So do the beez.

We've had a little turkey trouble - TurkZilla has become extremely aggressive. But our two remaining hens are doing great. They have not been able to successfully set nests however. And our incubator full of turkey eggs was a huge failure - not only hatchling.

The goats are doing well also. Since there is not much in the goat yard for them to graze on I've been taking them on forays into the green. This is my absolutely least favorite chore. More on this later. We have been stocking up on hay where we can get it. Anyone who has hay to cut sells out as soon as they advertise and folks from other states are already bringing in semi's in to truck the hay out of state. Usually $3.50 - $4.50 is a pretty good price but some folks are already asking $6/bale. Can you believe it?

However, with all the bramble and weeds the ladies are eating - they are milking pretty well without the expensive alfalfa. I gotta tell you - based on results I might just be over the whole "they need alfalfa" thing... Dahlia is milking like a champ, Nibs has been doing well, and Debbie - who never freshened this year is still milking! 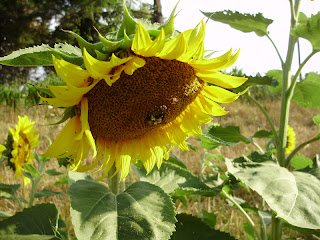 Our next goat action item is to determine a breeding strategy. More on this later but you can bet it won't include getting another buck. I'm still suffering from PTBD (post traumatic buck disorder) from Too Short.

As far as the pigz go, they are doing great. The first round of porkers are still in the lower end of the hen yard. After the incursion earlier this summer we strategically set the pigz against the foxes - penning the piz between the hennies and Fox Central.Will pigz kill foxes? I dunno but the foxes aren't stupid enough to climb thru the electric into the hog lot. And putting the dog yard on the other side of the yard ensured that the foxes couldn't just waltz in and kill another one of my hennies. We haven't seen hide nor hair of them foxy vixens since finding the shattered body of my little hens.

The little pigz, the Bacon Seeds,  are about to be moved into a new yard deep in the Impenetrable Forest.  Not only will they do the clearing for us, there is also tons to eat in the woods which makes them extra cheap to feed. Since we got them late we will probably butcher them late - maybe around Christmas time depending on the weather. We need to finish up the fencing but we are excited to move them out of their temporary digs in the Turkey House. We separated them from the big pigz so make sure they were getting their fair share of feed. But they are starting to get pushy and you know how much I hate that.

The garden is actually doing pretty well this year. I finally got the soil to the point where its actually productive, but of course I've had to do a lot of watering and running the sprinkler. I'm focused on fall planting right now - tons of turnips for fodder for the barnyard - and tons of root vegetables and greens for us this winter. Thanks to a pretty good garden year we haven't had to buy much at the store this summer. I'm especially proud that I actually grew a decent sized onion. And exactly 2 zucchinis. A third is on the way.

So I think that's the full update. Lots going on and its been a lot of fancy footwork keeping everyone and everything going in this crazy, rainless, relentless summer.

Today I'm headed up to our orchard friends to get a couple of baskets of peaches. But first I have to go and move the sprinklers. Again.

Happy Wednesday everyone! How's your summer so far?
Posted by Ohiofarmgirl at 8:44 AM

Glad to hear everyone is doing well despite the freaky weather. I am used to watering because I live 7" from the sun :D

Things sound about the same around here...we are buying up chicken feed every chance we get, the local farm store recently had some on sale at over 2 dollars a bag off, so we bought 3. Storage is the biggest hurdle for us...to keep critters out of it.

I'm planting fall stuff too...green beans are going in today. We had a month of temps over 100 and NO rain,. so I hadn't put in anything until; now. The garden has held up okay tho--raised beds, massive mulching and watering did the trick. We're lucky--many folks around here had theirs shot by the middle of July. I'm still picking tomatoes.

Hot, hot, hot too. I'm going to buy some extra chicken feed too for winter, as I know that's going to be an increasing cost :( I'm just going to eat more eggs (and sell less) if protein prices keep going up. I guess it will off set things, I hope...

This summer is flying!

We have already stocked up on hay and chicken feed, there is no doubt that prices are only going to go up.

Bacon seeds... Mmmm! Ya know, I've never really cared much for bacon -- and then this summer came. Good grief, I can't get enough. I'm craving crisp bacon fat, melting in my mouth! Just my luck, we finally stop raising hogs and I start wanting bacon. Doh.

I am shocked that cracked corn has went up so high! Glad your garden is doing well!

nice to know that the pigs can protect the chickens from foxes. We are a big worried about wild dogs taking our calves, so maybe a bit protection system would work there too if we knew which cows were due and rounded them up. (not that we have pigs yet, but its definitely on the wish list!)

Great stuff. Trying to start my only little homestead. You have me thinking in so many directions with goats and bees and hogs. Keep up the great site. Thanks GypsySixx