I Won A Major Award!

My first real major award! And I won it! I've been trying to win the "guess the pumpkin weight" contest at our feed store for years and this was my year! Finally! 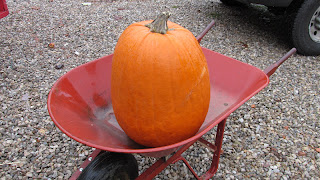 My major award. A tribute to my mind power.

Every time I'd go into the feed store I'd take yet another slip of paper, write down my name, and guess another weight. I was bound and determined and spent a lot of time analyzing that big pumpkin in the window. I'd covered all my angles and included every contingency, including that they had soaked it with water to make it heavier. Every variable was considered.

So you can imagine my surprise when I walked into the feed store and all of them behind the counter took one look at me and started laughing. Not snickering, full blown laughter. This isn't altogether unusual. Everyone has their own fashion style and mine tends to be "just out of the barn and unfit for anyone to see" and sometimes I really hit it out of the park, if you know what I mean.

Finally the feed store owner stopped guffawing long enough to say that I was this year's first runner up to the big pumpkin contest. Now runner up is pretty good and its as close as I've ever been to pumpkin victory. I was pleased and allowed The Big Man to bask in the light of my achievement while I stood and received well wishes from the unwinning rabble.

They told me that if Fred, the actual winner - altho there is some suspicion surrounding his "win", didn't want the big pumpkin then I could have it. And I would be crowned the big winner.

I drove right down as soon as they called to say that Fred had passed on the prize. Turns out that son-of- a-golly-what is a pumpkin grower. I believe his professional status should have eliminated him right off the bat.  Harrumph.

There it was in the window for everyone to see, glowing with unparallelled glory. My big pumpkin.

I ran right inside the feed store. Predictably they all started laughing. This time it was because of what I was wearing.

"What?!" I demanded, "Look I figured I'd come here right after chores. Its just a little pig mud, like you've never seen that before."  More laughter.

"Look. Just give me my damn pumpkin."  I marched over to where it was still in the window.

The owner walked over and picked up my big pumpkin so he could carry all 43.5 pounds of pumpkin joy out to my truck. "So, whatcha gonnna do with your big pumpkin?" He asked.

"Well I'm gonna use it as God intended." I explained.  "I'm gonna throw it to the pigs!"

He nearly dropped it.

"WHAT?" Came the chorus from behind the counter. They were all all looking at me like I was out of my mind. Then they gave me disappointed looks because I wasn't going to make it into a jack-o-lantern or a pie or something. Really the only thing a big pumpkin like that is good for, being all tough and stringy, is a snack for the pigz.

I drove away from their sad faces.

When I got home I ran to get my axe and I slew that great pumpkin and threw its ruined carcass into the pig yard. My victory was complete.

So there you go. I'm going to spend today making myself a big crown and refer to myself as "The Pumpkin Winner." I hope to do good during my reign. Maybe I'll get to be in a parade or something.  And I'm going to start practicing for next year. The only thing better than winning the pumpkin contest...is winning two years in a row. Whoot!

Happy Wednesday everyone! Anyone else win the big pumpkin?

Posted by Ohiofarmgirl at 7:52 AM

And next year, you shall have field pumpkins in your pig yard...The pigs will be happy, and you won't have to act like an axe murderer to feed them! it's a win win!

Congratulations! Well done that woman. I have recently taken to referring to myself as Peace Nobel Laureate (alongside 500 million other Europeans), but that's nothing compared to Pumpkin Queen!

In my 8th grade year I won a pumpkin. It was during the annual 'pumpkin run" only the first 30 runners from each grade got a punkin. I came in 28th. It was so nice because we didn't have the money for a pumpkin that year due to special ed teachers aids being woefuly underpaid! It meant so much to carve that sucker!

Ahhh, the Pumpkin Queen, I bow to your greatness of math equations. I bet those pigz enjoyed your victory! Well done OFG, well done.

You are absolutely right that they are only good for the critters. After today, I get to take the pumpkins that the kids have collected (uncarved - because what a pain in the butt!) and then I get to chop them open and throw them to the chickens. They love 'em, too. Supposedly a natural wormer for them, too. Heck, I'll just be happy with getting them off my deck railing.

Last night's supper was a homegrown one here, too. Venison loin that the neighbor got, but gave to us. Homegrown carrots from my Dad, because I can't get them to grow. Homegrown potatoes from my sister. So, it was all homegrown, just not by me, but I'm not one to turn down free food!

You are hilarious! :D But good on ya for winning... I've never won anything yet!

I was waiting for you to say you were the runner up and the winner because you had put in so many entries... not that I would know about doing something like that!

Make sure and practice the Pumpkin Queen wave before the parade ;-)

You go, girl! Do you think that the fact that you refused to make a pie or do something as frivolous with your giant pumpkin will put the locals against your winning a second trophy? I would have done the same thing.

No big pumpkin, but I scored 4 free pumpkins from work! One has become pie already. And mini pies for breakfast. The others are named Soup, Custard, and Fugly.

congratulations on your win, you should be very proud.

That's too funny! I won my 1st giveaway recently because the 1st winner didn't claim their prize. I got a great, new homesteading book! I'm sure the pigz will enjoy it! You should post a pic of them chowing down :)

When Shine delivered the news he was shocked by Nicholas' reaction. Shine had never seen Nicholas act so strangely.

As he left the room he could hear Nicholas mumbling; "It worked. I thought the rumors might sway the minds of some of the weak willed but I never imagined that OFG would be affected!"

Nicholas forced an odd high pitched laugh; "She actually got them a pumpkin for Halloween. I didn't get anything. Her precious dogs got zilch. Does she really now believe that pigz are friends?"

Shine's skin crawled as he heard Nicholas' odd forced laugh again. An unbidden image popped into Shines head, an old movie he had once seen OFG watching (through the window of course).

Oh my I almost peed on myself from laughing so hard,good for you for winning that pumpkin and haha on them.

A good laugh first thing in the morning! Congratulations!

Yep Stacy, I always love to see what comes up in the pig yard.

Thanks, Heiko! And ha! Yes this pales in comparison to your Nobel but its the best I can do in this small town. :-D

Yay or you, Sonja! And yes, pumpkins make everything better.

Thank you HDA, I'm still basking in my victory.

Chickens love punkins for sure, Traci. And wow what a dinner! Excellent work and great "community" effort!

Thanks SSF, winning is good. Is real good.

Practicing the wave now, FF! I'll be the best one in the parade!

I'll show them when I win again next year, Susan. I'm unstoppable now...

We are the champions, Nancy, yay us!

Ohmigolly.. Chai Chai.. you are something else! I'll be keeping a wary eye on Nicholas.. his vengeance is swift and terrible.

Ha ha on them is RIGHT, AnnaNF! Next time I go to the feedstore I am going to be just a little smug. ha!

Thanks Dave, I'm wearing my victory well, I believe.

I bet it was easy to chop with an ax. All of those giant pumpkins are fragil-e. It was an Italian heirloom, right????

Jeff.. best comment EVER! Yes it was fragile.. which I'm sure is italian for "pumpkin heirloom!" Ha!
:-D