Wow did we score a sweet deal this weekend! We needed to load up on firewood so we drove over to our local Amish guy. 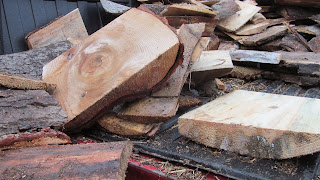 Unfortunately they did not have a full truckload of firewood (for $60) but did we want to fill up our big truck with some "slats?"

Wow what a deal! The local Amish guys have their own sawmills, not only do they give away sawdust (you have to load it yourself) but they also sell the outside pieces of the lumber they mill. Basically they are cut up pieces of the extra parts of bark and wood left over to square up the wood pieces to be processed later. I had heard about these "slats" from someone else... but I wasn't sold on using it for heating. I mean how could it work?

It works like a dream. First it was extremely well seasoned and very easy to split up into even smaller pieces. Next, it's almost entirely hardwood. We found a couple pieces of pine but it's mostly maple, oak, and cherry. Some of the pieces are really big. 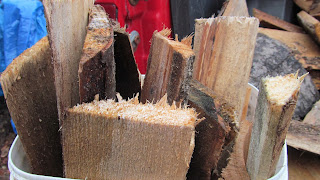 There are also some really small pieces - we were sure to get some of those. When I loaded out the truck I put these smaller slats into buckets and we will use them for kindling. The first fire I made with the slats was the easiest start I've had this whole season. It burns like a dream, is easy to handle, and makes a nice hot fire. Based on the number of cats in puddles around the stove I'd say it was a hit.

The only downside is that these slats do not stack neatly. I was able to put them in different piles based on size but it's mostly just a heap. Some of the pieces are absolutely stunning and some are in perfect blocks. I'd say this was one of our best purchases and we will definitely be back to get another load.

But not today - we are already at 40* heading to 50*! Someone keep me from getting out there and planting something! What a relief from the brutal cold earlier... but when it gets cold again we are ready to heat the house with slats.

Posted by Ohiofarmgirl at 9:06 AM

Wow... I've never heard of slats. Just one at the million bits of info I've learned here. Thanks OFG

I miss my federal wood stove I had in my first house.