What am I doing with my big winnings?

Just in case you are wondering what I'm doing with my big winnings from Project Goats-Be-Gone.....

Ah gravel.... my very thing.... I love gravel so much. Diamonds? Nope. Gimme real rocks. This would be seven tons of 8L and 57 Limestone right there.  To me this load seems a little light...but that's OK. I'm just glad I got it.

Seven tons was the most I could get delivered at one time. But I needed two different kinds - the smaller "8L" and then the standard gravel which is 57. So I asked for 2 tons of the small stuff and 5 of the larger. I told them that I did not want it mixed but separated.

The new guy at the desk was dubious. "That will never work." He said.

"Sure it will. And if it doesn't then that's fine too. Just load the small stuff in the front and the larger stuff in the back." I offered.

He shook his head like he didn't believe me. But previously I had talked to the other guy who knows what he is doing and we had worked it all out.... so I knew it would be a success.

The next day the driver came out and I showed him where to put it.

"There's two kinds of gravel in there." He said.

"It will get mixed together, you know." He said.  I just smiled.

So he flipped the switch to dump it....the larger gravel formed a nice pile. Then he pulled forward a bit and dumped it again. Voila! Two nearly perfectly separated piles of gravel.

I reserved my "told you so." I was too excited about all that gravel.

What I am going to do with it? I'm working on a project in one side of the Turkey House... and we also need it for mud control.

The mud is horrendous. The rain has been horrible. This summer has been a big washout. We had one day that was like "real" summer and was dry enough to work in the garden. I weeded as fast and I could and was still out there tilling when it started raining again.

Everything is a big mud pile or a puddle. No one is happy but the ducks...and the geese. The ground is so supersaturated that the continuing rain has no where to go. So we are all miserable.

I'll use the gravel to try and get the pathways walkable and also try and use it to fill in the worst of the puddles.

Since nothing is draining we have standing pools of water which are only getting gross and growing mosquitoes. 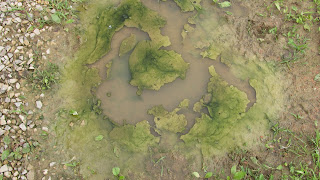 Our puddles are turning into bogs. Nothing is draining.

As soon as I drained this puddle it started to rain again. We really need to attack this problem. So much for us hoping that the summer would actually "summer" again. Yesterday it was raining and 70*... it's supposed to be 85*. While I don't mind the cool weather this is just getting ridiculous.

The ducks may be happy but they are only making everything worse by flippity flopping with their little webbed feet and "drilling" everywhere.  It's a big disaster. So all my big winnings and extra time will not be spent fixing the mud as best I can.

What do you do when it is like this? As always... the best you can. Keep everyone as dry as possible, make sure you are not letting water stand in buckets or random containers, keep everything drained as best you can....and hang in there.

If you will excuse me, I've gotta get out there and spread all that gravelly love around.... one wheelbarrow full at a time.

Happy Thursday everyone! Are you living in a big swamp? Did you get two perfectly divided piles of gravel? Did you give them the "told you so?"


Posted by Ohiofarmgirl at 7:57 AM

And here in SW France we are craving rain! Not one drop for weeks now, the biggest worry being that there is no grazing at all for our animals. The front garden has been abandoned (I dare not go and have a look to see how many trees, shrubs, and plants we have lost) in favour of keeping the veg garden watered. And there you are over in the USA almost drowning in water! Wish we could do a swop..... a few days of sunshine for you and a few days of rain for us! Vx

Not sure what part of Ohio you are in, but here in sw Ohio we are just as swampy. It's terrible. Literally had just enough time to get the crops out at the beginning of the summer, and it's rained ever since...

We've had 35 days of no rain. It's been two weeks of 90 degree days in a row. That just never happens here in the Pacific Northwest.

I don't think we're quite to you level of sogginess, here in southern PA but we appear to be gearing up for it! The oddest thing is the temps. It hasn't gotten out of the mid 80s. Which, as you say, is nice to work in but my poor tomatoes! The sweet potatoes! The peppers!

We've been getting lots of rain the last 3 days, much needed, and odd this time of year...