Summer (tree) Fruit around here has basically been non-existent. We had too cold of a winter/spring so all of the growers are empty handed. So WOW was I thrilled when I scored some plums and peaches! 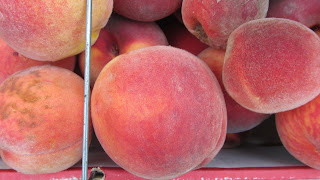 These local peaches are so scarce they are like gold.

I was, of course, late to the produce auction the other day. They have a "retail" section where you just pick whatever you want and pay a set price. This is sometimes easier than waiting to be part of the bidding auction. The only fruit they had left were some plums...but I really wanted those so I was glad. 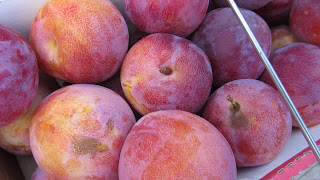 Plums......as in plum sauce and possibly some Pflaumenkuchen.

As I was standing in line to pay I saw the orchard guy and called to him. He laughed at my lateness and thusly lack of peaches - but then told me to stop by their orchard at another time. So I did!!! I scored some freebie peaches from the ground and a basket of nicer ones. Yay!

So I ran right home and made a huge peach crisp - the pigs got the trimmings and the not great ones.

Summer was not ruined - there were peaches. Oh yes there were...as in... that crisp is just about gone.

Posted by Ohiofarmgirl at 9:09 AM