Victorian & Edwardian Farm from BBC - check it out!

Mr. H and I have been having a conversation in each others comments that bears repeating.... does everyone know about the BBC programs Victorian & Edwardian Farm?  They are fantastic and are available to watch on youtube. I'm totally sucked in. You have to watch!  Thanks to Bubblingbrooks for sharing this fascinating series. 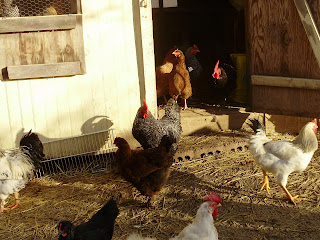 My chickens, raised in the Victorian way - get out there and free range ladies!
Historian Ruth Goodman and archaeologists Alex Langlands and Peter Ginn take on the challenge of living and working on period appropriate farms in these two, seems pretty darn real, series. The series are in 10 minute or so sections on youtube to its easy to watch a couple at a time. I watched the Victorian series up until they had Christmas dinner. I'll be finishing up today.

Of course I was very interested in Ruth Goodman's projects centered around cooking, poultry keeping, and house keeping. She has an interesting site here talking about some classes she teaches. Since it hasn't been updated I'm guessing she is working on another series - or sold out and moved to Hollywood. In one of the early episodes Dr Nicola Verdon joins in for some of the housekeeping duties. She has several published works and I'll be checking out some of those also.

They mentioned The book of the farm (published in 1844) by the extraordinary Henry Stephens. I found it online for free here. But I'm probably going to order it from Amazon here in paperbook or wait around until the hardcover is released. The book is an amazing resource for all things old timey - the real McCoy here. I love the tender way he explains overwintering a late season clutch of chicks.

The farm team uses Stephens work as a guide to their work thru the seasons. One of the reasons I like this old timey way of doing things - aside that it works - is that the folks in those days were hard working, thrifty, and resourceful. They couldn't just go on down and get a bag of superduperdeluxe sheep chow and call it a day. They had to figure out and develop their own resources.

They talk about growing and harvesting mangle beets (they called them Mangelwurzels -ha! what a great word!) for their livestock. These highly nutritious, easy to grow beets were over wintered in a big heap on the ground covered deeply with straw. My pal Bourbon Red uses this method for this mangles and turnips - it works! For the price of a sack of mangles from Shumway you can grow a field of beets and have a winter's worth of supplemental feed for your stock. Even on a small scale these kinds of 'grow it yourself' strategies play to our cheap way of doing things here on our farm.

As I was watched a couple things reached out and grabbed me...

Ruth talked about the importance of light and how your day was set by how much daylight was available. Just the other day I was saying this to The Big Man. Its so hard to get a project started when the days ae so short! And when our power was off last winter for several days we quickly discovered why the biggest meal was usually at mid day - so you could see to prepare it!

And watching her go thru a four day clothes washing routine made me extremely grateful for my big old washer. Altho I wondered why the team didn't have "outside" and "inside" clothes like I do here to keep down on laundry. Just so's ya know.. my clothes would have been yellow, not blued, and not ironed. Yikes!

I don't know about you but I'm just not convinced that the turkey cooked with that bottle jack, turney thing....

The whole pig strategy thing was a bit puzzling but maybe it will all come together later one. If they got pigs in winter then they will be ready in summer to butcher... but without refrigeration, how they heck are they gonna chill the carcasses? And I'm sure D over at Spring Hill Farms noted that the pigs were Tamworths! And yep, these are the best bacon pigs we've ever had.  While I admire the determination, I don't know if I would have built the stone "hog huts" I think I would have found other accommodations for them.

Chai Chai, Kenleigh, and other sheeple probably cringed with me when the guys were chasing the ewes trying to get the ram separated from the flock. Hey buddies! Stop chasing them sheep like that! And big ol' Fred the Ram kinda put the fear into them boys.. ain't that right?

On a related note I was wondering what those guys were doing without a hard working farm dog... and no barncats to speak of. Maybe they will be featured later.

As I said to Mr, H.. this is my kind of  'reality tv' and is much better than watching a bunch of half naked 20-somethings, shamefully strutting around, being snarky, lazy, and hooking up to win the title of Biggest Realworld Jackass Bachelor Millionaire Housewives.

Happy viewing everyone!
Posted by Ohiofarmgirl at 9:45 AM

Hey thanks for that link girl! We don't have TV here at Goodwife Farm (we have a set, but no antenna, cable, or satellight so it's dvd and vhs for us), but I'm going to watch it on youtube when I have the chance. It sounds like something I'd enjoy. I don't really care much for modern tv shows, that's why I like reading blogs. I enjoy real life everyday stuff, not the drama that has to be on a tv show. Anywho, thanks again!

So, I started watching yesterday because of your mention of it. Very engrossing. I am hooked, even if on my slow internet it takes 20 minutes to load one 10 minute section (sigh). One thing that struck me, though, was I sure I wish I had expert neighbors to come over and help me learn how to plow with horses....and all the equipment (I want to make cider like that - never mind if I can't grow apples in Hawaii).

Dogs chasing cars and humans chasing rams, both have no idea what they would do once they caught the target of their affections - or even if they would survive.

I really want to watch this, but if I do, I just know I'll get sucked in and fail to accomplish anything worthwhile for a whole day. So I'll wait awhile.

PBS had a series of shows like this for awhile, starting with "Pioneer House" and including one where people had to live like the Plymouth Rock Pilgrims (I think), and I saw one BBC one about a Victorian House. Mostly I found the people on the shows to be irritating because they were constantly bitching about all the work and cheating on the rules. Tenderfeet, every one. But I guess that's what makes for good (?) television.

hey GW! You said it - we dont have cable so I'm always on the hunt for these kinds of things. Its really inspiring AND useful.

NancyDe - do you know about Small Farmers Journal? Its a GREAT magazine that teaches how to farm with horses and just about everything else "old timey." They finally have an online site:
http://smallfarmersjournal.com/

Occasionally they have events in Oregon.

CC- Them boys chasing the sheep was just so darn stressful! But the sheep guy was my favorite character. I'd like to meet that guy (and his dog).

Kristin: just wait for a snowy day.. you'll be mesmerized. And yep I saw Pioneer/Pilgrim thing too. And yep all the complaining bugged me also. But then most folks I know couldnt keep up with yours (or mine) typical chores. Aint that right? Parents actually threaten their children that if they don't straighten up they'll have to go and work at Auntie OFG's and we got nothing but hard work, discipline and beatin's! (and no facebook or tv)

And I want some pretty old fashioned girlie dresses and aprons for working in. (I wear skirts all the time and the idea of the long ones with bloomers and petticoats for more warmth? Shiny.)

But evil you sucked us in. :P

Thanks for sharing the link! What a fun and informative show and yes, I did cringe when the guys were chasing the sheep around. I can't believe how often this is done and unfortunately, I still remember when we first got our sheep and had a few sessions of chasing!
Have you raised Tamworths before? Can you really tell a big difference in taste? I have thought about finding some the next time I am crazy enough to say 'let's get pigs again' :)

hi Kenleigh! I'm telling you the sheep chasing was so stressful for me! I woulda let the dogs 'circle wide and bring them to me.'

And yep the Tams are amazing. I think the taste is more about how you feed, but the amount of marbling (thru out the meat) the back fat, and size of the bacons make the Tams #1 for us. Get crazy baby and get pigs!

They've been showing the series up here in Western Canada and I keep missing episodes so I bought it on DVD. It's in Brittish format but my laptop is set up for it. I love the whole thing. It's right up my alley.

Just wanted to say a big thank you for linking to these series - I just can't get enough of that kind of stuff and I had no idea they'd done another couple of programs like this and about FARMING no less - I am so hooked! Thank you!

Anyone else think that they should've left everyone with a good sheep dog?

Hi Jenny and don't you love the series!?! Your dogs are spectacular! I was wondering if I should try and train Ti in sheep trials.. but alas we have no sheep and he's pretty good as he is. Wish you were closer, I'd love to attend a class.

Diana - isnt this just the kind of thing we NEED on tv? 300 channels and nothing to watch but then this! Whoot! I really think I'm learning from it.

Thats what I'm sayin, Naomi! Hey you boys! Quick chasing them sheep! or cows! Jenny needs to send one of her dogs right on over there. (and there are NO barncats! how do they even manage!)