Everyone who lives in the country knows that when the weather gets bad mice leave their fields for any building they can weasel their way into. It usually doesn't go well for the ones who enter the domain of The Insane Cat Posse. 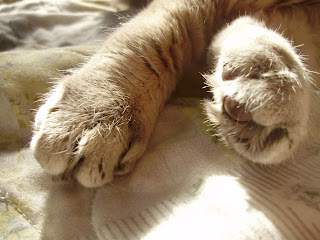 And yes, LOTR nerds, say it fast and Paws o' Doom becomes Khazad-dum.
Unlike Little Mo, our 17 pounder (Maine Coon x raccon), Nicholas actually has lethal paws... Paws of Doom we say. Once we gets off the couch he's a a skilled hunter, descended from a long line of feral cats and possibly from the most feared of all barncats, Dragon himself.

We know when a foolish field mouse has come into the house when I walk into the kitchen and see cats butts lined up along the cupboards, and the cats staring murderously under the sink.  All except for Peeper who thinks mice are gross.

The other night Nicholas was in a pounce pose when, like grey lightening, he struck...and grabbed a mouse from under the dishwasher. In one fell swoop he struck his target with his mammoth mouse-stompers, and his victim was his mouth in a wink of my eye.

And I was instantly up on the couch shrieking at The Big Man to save Nicholas from that mouse. Mind you, that mouse had the raw end of that deal. 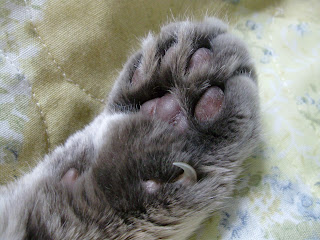 Talk to the paw, mice.
Now friends, you know I'm pretty stout. I don't flinch, I don't back down, and I certainly don't run from a fight... unless its a mouse. I know. I know. It's lame. But there is just something about a mouse in the house that freaks me out. Yikes!

The Big Man scooped up Nicholas, and his prey, and took the whole shootin' match outside. He returned a bit later swearing that he had gotten the mouse out of Nicholas' mouth. So he says.  But I could have sworn that I saw Nicholas later that night patting his belly contentedly. I'm never kissing him again just to be sure.

At this writing there are 4 fuzzy bottoms lined up along the under-the-sink-cupboard... There will be blood tonight!  And a certain amount of screming by me, for sure.

Happy Wednesday everyone - are you all ready for the storm? We are fixin' to get a pounding. Again.
Posted by Ohiofarmgirl at 10:34 AM

There are few things better than a good mouser! Glad you've got the old guard to protect you. We are snugged in for the snow that's coming in tonight and tomorrow.

Mice are gross, but there's something cute about having those butts lined up watching the cupboards. My cats do the same thing!! It's nice to know when something has invaded the house, lol, they're like little kitty alarms.

I wish my cats would hunt mice but instead they seem to like hunting squirels : ( They actually eat the poor thing and leave the tail. I told myself no more kisses for them or from them anymore!

hi GW - wow they have been warning about this storm for 2 days! my hubby just left for the feed store, just in case. Snow = boo!

Hi Mandy! The only problem is that now I'm afraid to get up in the night. Stepping in cat barf is one thing..a disemboweled mouse? Quite another... eeewwwwuuuueeee.

Definitely a big storm coming and I have to drive to Cinci tomorrow. UGH! I LOVE this post with the cat paws. I'm such a girl too when it comes to mice in the house. Be safe and stay warm.

A good mouser is a necessity when living on a farm...sounds like you have several good ones :) I can't believe how much snow you guys are getting!!!

I stepped on a mouse in the middle of the night once. I don't know who squealed louder, me or the mouse. I rest easier now that we have the cats. There's a storm coming? LOL, you know I'm ready for it.

Periwinkle, our barncat Shine brings down rabbits.. he's a puma at heart, we believe.

Yikes, Sara! Drive safely! The weather guys seem to think the worst of it will hit about noon. Hope you miss it all.

I know, Kenleigh, this is pretty unusual for us. There have been Decembers where I've still be in shorts (wool sox and a heavy sweatshirt, but thats my PacNorthWest style...).

LOL, yes I have my french toast ingredients. Might need to make more bread though.

It's funny you posted this today. Just this weekend we awoke to our two cats sitting still as statues and staring under a cabinet - definitely the Death Stare they reserve for mice. I pulled put something that was on the floor to peek underneath the cabinet and didn't see anything, but when I went to push it back under, a mouse squirted out from underneath it and took off running. I screamed "EEEEEEEEEEEEEEEEKKKKKK!!!" Just like in the cartoons. I never scream EEEK - but I sure did that morning. What is it about a teeny tiny mouse that causes such panic?

I still have mice problem in my greenhouse. Those neighbor's cats seem to go there just to enjoy the sun and warmth on a cold day... They don't do any hunting!

I love your cats!

B2B - isnt that a laugh? i mean, stare down an angry 300lbs hog - no problem. get out there and battle a demon gander -i'm there. but a MOUSE. and while i'm hopping around on the couch or chair i'm thinking "what is WRONG with me!" ha! oh well, thats why we have all these cats, right?

VRT - i bet those cats love your sunny green house! Nicholas sends his regards and says "get lots of cats!"

Those are some natural born killers you have there, wouldn't want to be the mouse in your house. My lazy fat cats could learn something from yours...oh, and I keep forgetting to ship my extra kitty to you. Enjoy that snow, we are getting some too..

Oh! and you mentioned this great sounding book called "10 Acres is Enough." I ordered it a while back after reading one of your old posts and just recieved it this evening...can't wait to read it.:)

I always tease the Mrs. and ask her if it's one of saber-tooth mice again as she is perching somewhere high above the floor....

Mr. H, enjoy that book! I'll be interested to see what you think. And no, please do not send your little friend. We are currently at maximum CATpacity!
;-)

Hi David, you know... studies have shown the mice can and do spring at you like saber toothed tigers resulting in death and dismemberment. Please tell the Mrs. that she is in good company up there on her perch.