My assassins, The Gray Shades, have been about their work. Lately these Bringers of Death have unleashed their terrible power on slow moving field mice who have dared to enter their realm. 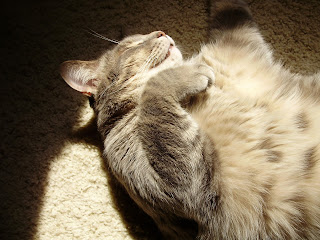 Don't let this lazy demeanor fool you - Nicholas is death on four paws.

You can sure tell that fall is falling fast - the mice are beating a path directly for the house. Luckily for us, our house and barn cats are on the job. Two days ago Shine's fury was unleashed on a furry little monster attempting to infiltrate the home base.

Can you believe a mouse was sitting around on the front porch? He was eyeballin' me so I called Shine. Who, of course, ignored me. So I stomped downstairs and demanded that The Big Man "do something." He lumbered upstairs, called Shine exactly once, and 30 seconds later Shine stalked off with the mouse hanging out of his mouth. Good boy, Shine! 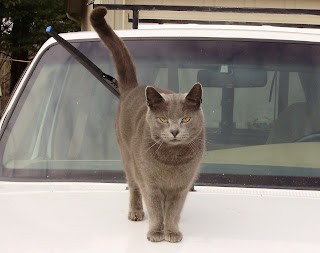 Come on, mouse, make my day.

Then yesterday Nicholas had staked out a far back corner in the kitchen. And waited. And waited. And waited some more. And then light gray lightening he struck and had the terrible beast in his mouth. I tell you the truth, I didn't win me any friends when I ran shrieking into the bedroom demanding that The Big Man get up RIGHT NOW and "do something."

There were a few moments of chaos but you gotta hand it to that mouse. He survived not two but three pounces by an 18 pound cat, a good stomping by Kai, and then lept to his death off the upper deck. And then ran away. Clearly that was one of the Special Forces type mice that were sent to scout the location for the rest of the troops. I hope the chickens get him.

I'm hoping all the rodent activity isn't foretelling an early or especially hard winter. But if the mice escape Shine's Reign of Death outside....and make their way inside they will be met by Paws of Fury for sure.

What about you - are you seeing more mice than usual? Are your house and barncats on the job?

UPDATE:
Has everyone seen The Gardener of Eden's post today about the historic Landreth Seed Company?  I ordered a catalog and some seeds. Click here to see the news story then run right over and spend a couple dollars.
Posted by Ohiofarmgirl at 8:34 AM

Thanks for posting about Landreth. If you check out their FB Page, as of yesterday (I think) they topped the $100,000. mark. Hopefully this historic company will survive.

We've been battling with rats who have been eating the duck food like we've set out some special buffet for them. We have three cats who are awesome hunters, but they're indoor cats -- we live in the suburbs (sometimes the word "urban farm" gets thrown around like a hackey sack but I suppose it's what we got) so we keep them inside (they at least keep the inside mouse and insect free). For now, all we can do is watch the rats pig out on the duck food, and the stupid ducks just stand there and let them do it. The dogs got one once, but that was it. Can't wait to get out in the country so we can let the cats do their thing!

Oh yeah! we are seeing 'em alright, but it has nothing to do with winter coming. We used to have a tree filled field behind our house. It's a few acres. They bulldozed everything down a few weeks ago so guess where all the critters went. There are a couple of rat families living in the roof of our carport and we have seen a few mice in the house. We don't have cats, but we do have a pretty tenacious little miniature schnauzer and a pit bull, so critters beware. We set traps too.

Around here I swear we are at constant battle with the mice/rats. After they foiled at least 6 different kinds of traps (they were snapping them then eating the bait!), we finally resorted to putting out poison.

The result of this was one dead squirrel, one bird that seemingly fell out of the sky and into our yard, one dead rat hanging over the hose spigot, and a dying mouse going for a swim in the duck's pool!

I cannot wait until we can move out of the city and put our own feline death squad on outside patrol!

My youngest cat seems to have the situation mixed up- she keeps catching mice outside and bringing htme in to show me- and they're still alive! One escaped under the fridge and has been happily taunting both cats from under the cupboards for over a week.

Great news Robin - I'm spreading the word to the folks I know.

Isnt it awful, BO? One duckkeeper I know only feeds outside and during the day. Might help you - can never underestimate ducks...they are killers for sure. Also search for water bucket type traps - might help. Best to keep the cats inside in-city. Come on out to the country!

DoC - we see more rodents when they start taking down the crops also. But lately this has been ridiculous.

Hey THT! we use poison earlier this summer also. But we were so nervous that one of the barncats or the dogs would eat a poisoned varmint. We patrolled the yard before letting anyone out - but we got rid of a lot of rats that way.

Callie - thats hilarious! Well I guess it was kind of helpful... hum... ha!

Mickey, our rodent patrol, pretends to be harmlessness and cuddlesomeness impersonated, but don't be fooled, nothing small and furry or even feathery gets past our Mickey, even if her nickname is Mickey Mouse! And not like some spoiled beasts, she doesn't drop them in front of the door as a present, but devours them whole.

l don't blame you for calling the big man! I don't like those critters either...They can also get into the grill < that was a surprise to me..until one scurried off in the fall when I was preparing to fry some fish outside. They like the little grease pots..

hey Brother Heiko! Great to see you! Nicholas says to give Mickey a "high five" for mouse eating (eeeeeek!)

Ginny - I can take a lot of scary things but not rodents! Yikes! Shine and Kai tag teamed another rodent tonite... they are a killing machine. I'll send them out to check the grills.
;-)

Just ordered 2 catalogues and made a small donation to Landreth. Will spread the word to my gardening friends and hopefully we can keep this historic company afloat.

There's nothing better in the house than a couple of good mousers. My 3 cats on the other hand...

Our cat is not a mouser. Thankfully, we haven't had mice in the house for a while, but I have mice in the barn. We had a cat for a very long time that was a voracious mouse killer, but he passed away a few years ago.

L - great work on the order!

Autumn, give it time - another barn cat is always just around the corner.
;-)

He is a beautiful rat catcher!

Thanks for sharing your ideas and thoughts, i like your blog and bookmark this blog for further use thanks again...