Was yesterday a great day or what? We had it all - democracy, chicken guts, and asteroids. 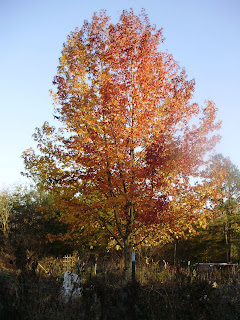 Last of the leaves are hanging on...

First, it was our last nice day - sunny and 70*, baby! But its gonna try and snow by the end of the week so summer is official over. Then we ran right down and voted.

I love voting in a small town. As soon as we walked in one of the poll workers shouted "Hey! Its Medium Hot Fudge and Peanut Butter Shakes!"

It was the lady from the family run ice cream stand. The woman next to her leaned over and said, "Who?" The ice cream lady said, "That's Mr. and Mrs. The Big Man."

"Oh. You mean the one with the goat?"

I stood a little taller in my fame. The first thing we were told when we moved to this small town was not to tell anyone our business so's folks wouldn't talk. I immediately started making up wild tales just to watch the rumor mill churn. Some folks may have been led to believe that I'm ex-DEA and currently in witness protection. I don't know how they got that idea. (Ha!) 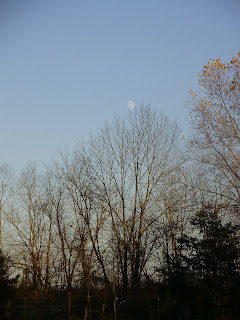 The full moon is coming on - keep an eye on the barnyard for malfeasance.

After that we loaded up at the feedstore we went home and took care of a couple troublesome roosters. I mean to do a post called "Life is too short for a mean rooster" but pretty much I can't keep a straight face and the whole thing degrades into a bunch of stupid jokes. But we had a couple mean roosters and I wasn't fixin' to feed them one more minute. So they are going to their glory in a pot of noodles. The hens cheered as that big light brahma mix got a good pluckin'. He dressed out beautifully. You can't go wrong with a big old coc... I mean.. rooster for the pot. *snicker*

And then we all survived "Asteroid Near Miss 2011." Thank heaven. Me and the dogs went out to watch the going's on but pretty much all we saw where a bunch of stars. At one point we thought we saw something but it turned out to be an airplane. Defeated, we all just went back into the house.

That's the doin's here. We have a couple hours before the rain comes on. Heaven knows I need an inside day but we are about to run right out and rake up as many leaves as we can for the compost pile.

Happy Wednesday everyone!  Did anyone actually see Asteroid 2005 YU55?

Posted by Ohiofarmgirl at 8:05 AM

Dang, the whole planet was almost destroyed and I didn't even know about it..got to watch the news more often.

Happy Wednesday, have the best day ever.

Nope, didn't see it. But, I have to say, there's nothing better then a big old coc...rooster in the pot!!

Asteroid news in our part of the world created some instability in the atmosphere. We had rain, a REAL rain for the first time in months (almost a year). Viewing the phenomenon was out of the question, but we were thankful for the clouds. A further reminder was our ceiling fan. It made a terrific racket. Once YU55 passed, the fan settled down. Who knows... maybe it was not such a coincidence afterall.

The only reason we all can still sleep safe in our beds is because of the sacrifice of a hard working Texas deep core drilling team....Bless them!

Nope, missed it here too. was busy canning up some more beef stew after grocery shopping. Nothing on the ballet this election day, so we got a pass on voting. Had a special election in September for congress.

If the asteroid DID hit, I am not sure anyone out here in the desert would really notice, to be completely honest. Too many meth labs.

Have a great week.

Oh, how I have missed your witty posts :) Life is just too busy here! I always love your titles too. Enjoy those roosters :)

*snort* Robin, I love that you get all my stupid jokes!

CABH - I was hoping for something interesting to happen. Sheesh!

Kenleigh, it winds up before it winds down, huh? sheesh!