Wow what a creepy meat harvest! We've been working on getting all of our fall creepy meats safely tucked into the freezer. These meat monsters are huge and we are really hauling in the goods. Some of my pals have either just gotten "creepy meats" or are thinking about it. So I thought I'd fill you in on the creepier parts of the creepy meats. 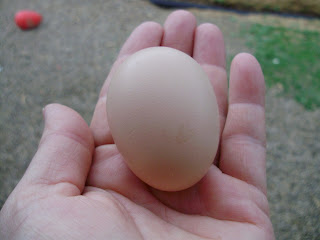 Guess where I found this egg?

But first.....alright tender victuals.... don't look if you don't want to see blood and guts and weird chicken parts!  All of these parts are creep-tastic and you might just get the vapors and fall right over. Look away...last chance...Don't say I didn't warn you and don't burst into tears and then complain about it later. If you would rather see adorable little goats then click here.

Everyone still with me? OK so here is the deal. We should have whacked these creepy meats a while ago. However, it was either too cold, too wet, we were too sick, or we were just too lazy. The good news is that we still haven't had any big losses. Out of the original 30 one didn't make it during shipping and one randomly give up the ghost.. but the rest have done just fine. Winter meats really are easier than summer meats. Its easier to keep them warm then to cool them down.

Rather than do one big butcher day its easier for us to do just several at a time. This works better with our weird work schedule during the week and also lets us get all our other work done. We had some interesting finds during the last couple days.

Remember when we found those unhatched eggs in a batch of meats a while ago?  Can you believe that one of the creepy meats actually had the above egg in the shoot!  That's right - I found the egg (in the first picture) still in the chicken! It was very very interesting. Most of the meat hens have some unhatched eggs in their egg producing system - this is because we waited so long to butcher them. Now they haven't had a rooster with them for a while so I don't think the egg is viable. But isn't that amazing? 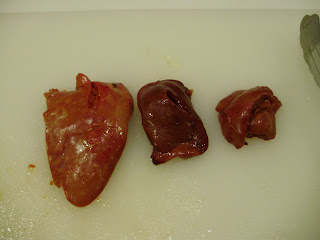 The center one is what a liver is supposed to look like... nice, plump, and red.

Next, remember when I had that amazing pasta and liver dish? Check this out - most of the livers from these chickens are not red and lovely like I used for my pasta.. they are orange and weird. I believe its because of how fat they are and because we've been mostly feeding them corn! Makes you want to put down the bag of "Itos", doesn't it? 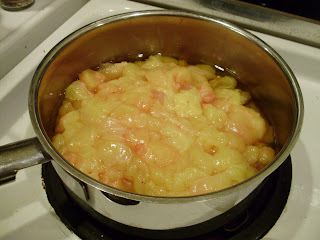 Use a heavy pan and low heat to render chicken fat.

Speaking of fat - my gut bucket has never been so full. We pulled out chicken fat by the handful and I'm rendering it all down now. This is just from 4 chickens! Our eyes boggled when we saw all that lovely fat. 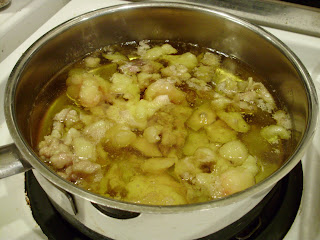 Folks ask me what we use chicken fat for.. well.. everything! Any time you reach for a bottle of corn oil, we reach for chicken fat. I've been using it to fry eggrolls in, or eggs in the morning, or to grease the pan for grilled sandwiches. After its cooked down I strain it and put it in little plastic tubs then store them in the freezer. Easy peasy. 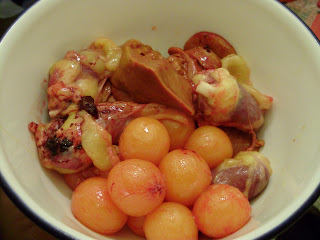 My next step is to take care of all the weird parts. Mostly this means that I cook down any leftover bits for the dogs. Kai nearly died of love for me when she sat patiently waiting me to feed her cooked chicken hearts, one after the other. I'm also cooking down the biggest of the unhatched eggs for the dogs. Some of the old timers say to put them in your pot of noodles for a real treat. I might just try that one day. But not today. 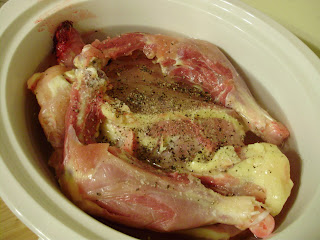 One carcass barely fits in the crock pot.

We always let our creepy meat chill in the coldest fridge for a day or two. Then after I part them up we make stock. I only cut up one chicken for supper tonite (from yesterday's work), so I fired up the crock pot and am letting the carcass cook down low and slow. I cut the carcasses generously because we use so much of the meat after stock making. All that "unused" leg meat will find its way into eggrolls or chicken salad some day.  One creepy meat carcass, including the legs, fits into our crock pot. In the morning the house will smell like heaven. 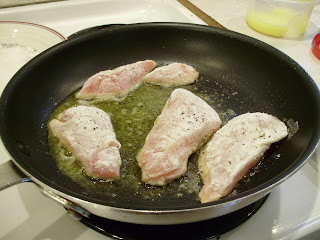 Fried in chicken fat, of course, and finished in the oven. Delish!

And last... frying it up in a pan. We had a super supper tonite - fried chicken cutlets in a cream gravy, Grandma's corn pudding, and green beans. That's what I'm talkin' about.

So pals who have creepy meats - this is the kinda thing you might run into. Now if you butcher them young enough you wont have such weirdness. But on the upside, if you grow them out slowly you'll get a heck of a haul ....and a few strange bits.

Happy Saturday everyone! Who wants some fried chicken and gravy?

Posted by Ohiofarmgirl at 7:01 PM

Our creepy meats have about 4 more weeks or so to go.

Thank you for this post. I am especially interested in the cooking down of the chicken fat!

I hadn't thought about rendering the chicken fat. Granted, I only just did my first batch of lard a few months ago. Gonna have to try it. :)

We are doing creepy meats (what we call "icky chickies") again this year (last year was our first batch). Chicks are due to arrive in about a week. They're gross, but delicious!

How old were the meat birds? That's amazing that they just didn't die on you!

What time is dinner! My mouth is watering! I wonder if the big fatty livers would be more "foi gras'ish" - a quick sear and see how they are?

i butchered mine at about 12 weeks after they were on the local grain elevators custom 20% blend. there was verrry little to NO fat on the first batch, but a week later when i did the second batch they were starting to put on a bit of fat. they seem to only reach a certain meat potential then just put on nuttin but fat.
and yup, fatty liver!!! my dad would LUUUV to cook that liver up! they are usually very dark red, almost black...

If you are interested in building a plucker, I still have the plan book. Just let me know where to mail it.