We Made Maple Syrup!

I'm not prepared to call it a raging success... but hey! Look what we did! 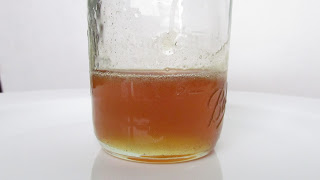 The fruit of our labor. That's a half pint jar, folks.

Tapping our maple trees was really a fun project...and it worked!  We've been wanting to try this project for a while - especially since we know folks who make syrup and we just love it. But we either haven't had our act together or didn't have the confidence to try it. But this year is our year.

The best online references we found were Tapmytrees.com and also Our Neck of the Woods Part One and Part Two.

We ordered taps from Lehman's. Of course you can spend a lot of money getting all the gear, but since we don't know what we are doing we just got the metal ones for $3.25. We grabbed the drill bit, a rubber mallet, the taps, a bucket, and marched out there.  A little bit of drilling, a few taps of the hammer, and soon sap was flyin' right out of that tree and into the bucket. We couldn't believe it. After about 5 hours we had a little over 2 gallons of water.. I mean.. sap.

The next morning we ran right into the kitchen and started boiling down the sap. That worked also. Well. Mostly. I was monkeying around with the official candy thermometer and may have heated the syrup a little too much during the final finishing step. But at then end of the day we had just enough syrup for one pancake.

We were thrilled and called it a victory. The syrup was sweet, light, and delicious.

Like most things we like to try our new projects on a small scale before investing too much time or money. We were glad to do our learning on 2 gallons of sap instead of 40. The downside of trying this on a small scale is that you end up with a very small amount of product. The sap has to reduce at a ratio of 40:1 (or more) to become syrup. So if you have 40 gallons of sap - you'll get a gallon of syrup. 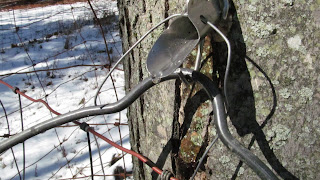 The sap came flying out of the tree as soon as we put in the tap!

Here is what we learned:

1. We can't believe we didn't do this earlier. It totally worked. Everyone should just try it!
2. We should have marked our trees when they still had leaves on them.
3. Next time we will probably have a more elaborate set up then just the cheap taps and an open bucket.
4. I'm not going to try and boil 40 gallons of sap in the house. Wow! We had the fan going and the window open and it was still so much steam! The good news is that the walls and the inside of the windows are now clean from when I had to wipe them down.
5. There is a fine line between usable syrup and something that is kind of like candy.

Now that we have our confidence up we are going to work on our tapping project this week. We'll have freezing nights and sunny days for the next week to 10 days. Apparently these are the proper conditions.

We'll be ready for a lot of sap. We have a bunch of 5 gallon food quality buckets for collecting and storing the sap...and I have several extra big stockpots for boiling it down. We can do this outside on the gas grill so I think we are good to go.

We'll have more results as our week goes along but if you are interested at all - give this project a try.

Happy Saturday everyone! What are you waiting for? Get out there and tap those trees!

Posted by Ohiofarmgirl at 10:20 AM

I know people who do this outside, collecting scrap wood all year for it. They use pallets, construction waste wood (unpainted/untreated), downed pine trees, etc, and do it for free!

The candy stage is called maple taffy, and the farmer I worked for as a kid would eat it by the spoonful with handfuls of salted peanuts in between spoonfuls of taffy. Yum! And there is nothing better than getting to lick the scraper used to get the maple sugar from the pan into the molds.....holy cow, that is good!

Congrats on the great project! I have taps but have yet to do this. Seems like something always comes up when the sap is running....like today, the Blizzard of 2013 has made my sugar maples inaccessible!

Bravo! And I can so relate with practicing small before scaling up... 40:1? Wow thats a lot of evaporate!

thanks Free! we think we finally found a use for all that scrub pine we have. we've got a way to set up to either do the boil on the grill or with a kind of rocket stove. whoot!

thanks Dave! i thought they were just being wusses when they said not to boil in the house. but wow! its totally different than canning or making stock. but hey the windows are clean now!

Our Neck of the Woods said...

Awesome! Great work! Good idea to start it on a small scale to see if you enjoy it and if it works out. I'm glad our tutorial was of help to you! :)

I've always wanted to do this! Good to hear that it's easy. I just might give it a try!

Awesome! We bought 3 taps from lehmans last year with the sap bags and ended up collecting about 30 gallons of sap. Only used about $60 worth of propane in the turkey fryer to boil it down too. :) It was fun though, and we have plans to turn an old fuel oil tank into a wood fired sap boiler...plans....so many plans. :)

thanks rkbs! it was way easier than we thought.

thank YOU OurNotW! you posted a great tutorial and it was easy to follow.

SFG - you should try it!

Jon - yep we are prepared for it "not to be worth it" but really i think we have a strategy. :-D

Wow - congrats on your syrup! Awesome process, isn't it? We've helped our friends do it a few years ago (our property only has oaks - boo) and they had a great homemade setup.

They built a rectangle of cinder blocks the width of those silver catering pans you can get from restaurant supply stores, as long as four of those side by side plus a cinder block chimney on the end, and about thigh height. You build a fire in your rectangle toward the front and fill your pans with syrup. Then, you stand around skimming foam and ladling the syrup from the beginning pan to the end, occasionally, refilling the first pan with sap when it gets low. The wide catering pans allow steam to escape faster, and the pans further away from the highest heat are darker colored finished syrup. Plus you don't end up with sticky kitchen walls.

Don't know if that made any sense, but if you're adventurous and have lots of cinder blocks, it works wonderfully! :)

my friends make maple syrup they bought an evaporator pan that has a built in wood stove underneath we boiled some sap down outside once, but it tasted like wood smoke
my friend has a special thermometer that tells you when it is maple syrup

I'm so jealous! I wish the property we have had maple trees on it and am considering planting some just because sugaring is so fun!

There is a trick to evaporating, which someone else suggested: surface area. Evaporator pans are sold to maximize surface area. You probably could boil faster/use less fuel in more shallower pans than one big pot.

If we get to sugar again, I'll boil to partial syrup and ferment into maple beer/wine. I've always wanted to do this!

Kristen - that TOTALLY makes sense. we are working on a rocket stove right now. there are some great youtube vid of how to..

Thanks Ann! i have a big roaster that i can use to as an evaporator. we are pretty excited to see how this work out. i read that it can be a tonic - so i took a cup of it after it had been boiling for a while. it was very delicious.

Rachel - this is great info. next time we go to the restaurant supply place i'll be on the lookout for an even bigger, shallow pan. when we did the little bit in the house i was using my biggest pans - and did several at one time to get the most surface. its was a LOT of water for the house tho. ha! windows are clean now. ;-)


and what a great idea to ferment it! wow!