Build a Hoop House: Step 4 Cover it up!

So far we have gotten our materials,  built a box, hooped it up, and framed it in. The last step is to cover it up with plastic. If you are bad with the clingwrap in the kitchen, horrible at wrapping presents, or flummoxed by odd shapes you might want to get a helper.  This was really the hardest part - and it took me less than an hour. 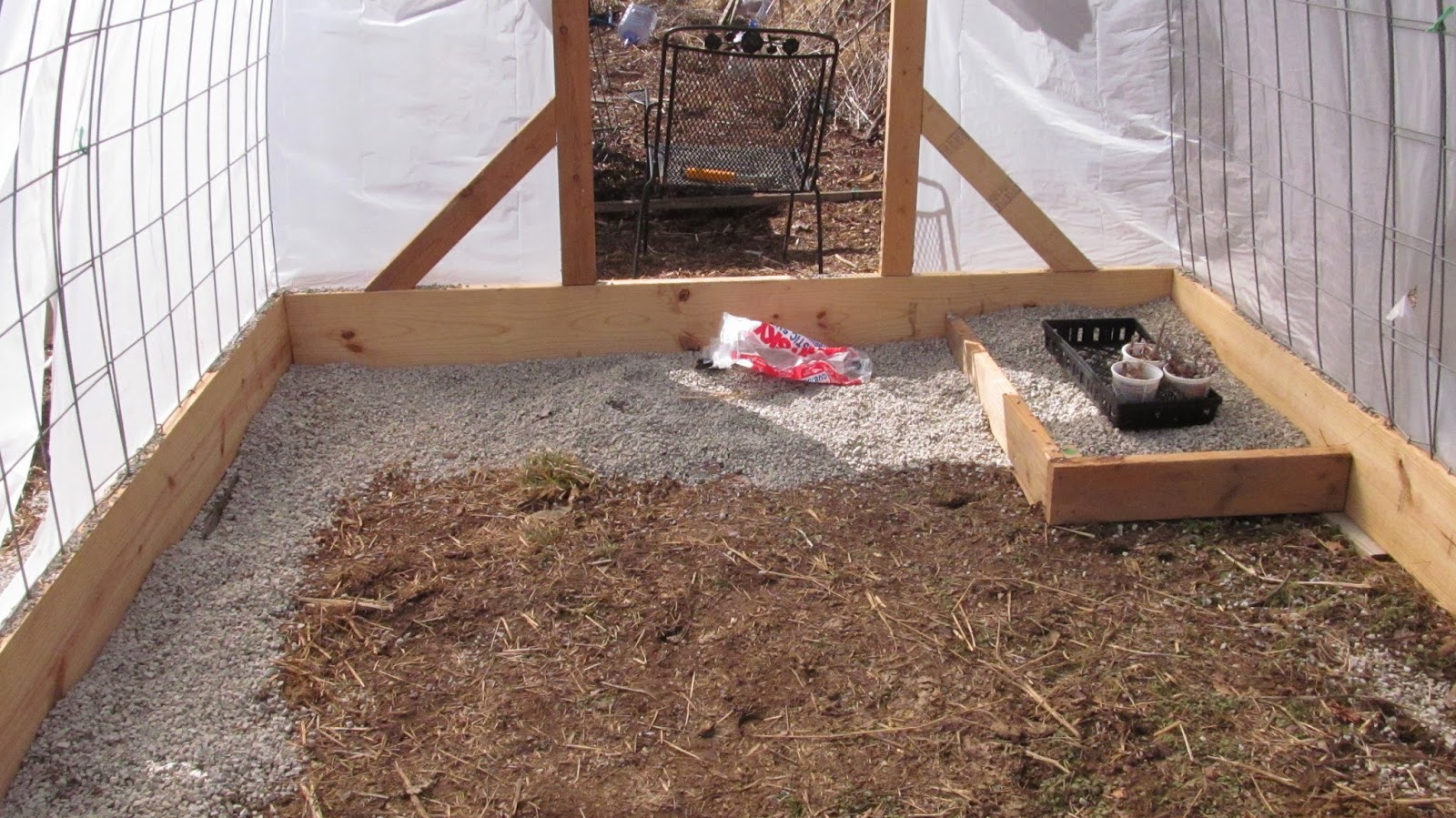 Somewhere along the way I got a load of gravel and was able to fill in around the base of
the greenhouse. See that I built a gravel "watering station" so I could keep from getting muddy.

My pal and favorite nurseryman, ML, suggests using greenhouse plastic film by A.M. Leonard. That is some very fancy stuff. But what I had on hand was some heavy duty 6mil plastic from walmart. I had about a half a roll and then I needed to buy another 10x25' roll for about $19. This will not last...but remember my goal is only to get thru the coolest part of the spring and then take off the plastic and use the hoop as a trellis. So I'm OK with that.

Honestly the hardest part of this was tossing a heavy roll of plastic up and over the hoop, unfolding it, and trimming off the excess. This was one of the steps where having a helper really would have been great.

My big idea was to over hang the plastic enough so that I could affix it to the doorway on the open end. This took some fiddling around but I was able to make it work. Think of how the ladies at the fancy gift wrap place can perfectly cover an oddly shaped roundish box. That's what I was going for. the next section was easy - just up and over the hoop, trim it off to make sure I had plenty of extra. The last section over hung the closed end just a bit. I wasnt worried about that.

The closed end was a different kettle of fish. I wish I had seen this terrific video earlier of how a guy built his greenhouse. The window at the closed end sure makes a lot of sense. Thanks to my pal, Sci-Fi Chick for sending it. Does everyone know her? She's really terrific. 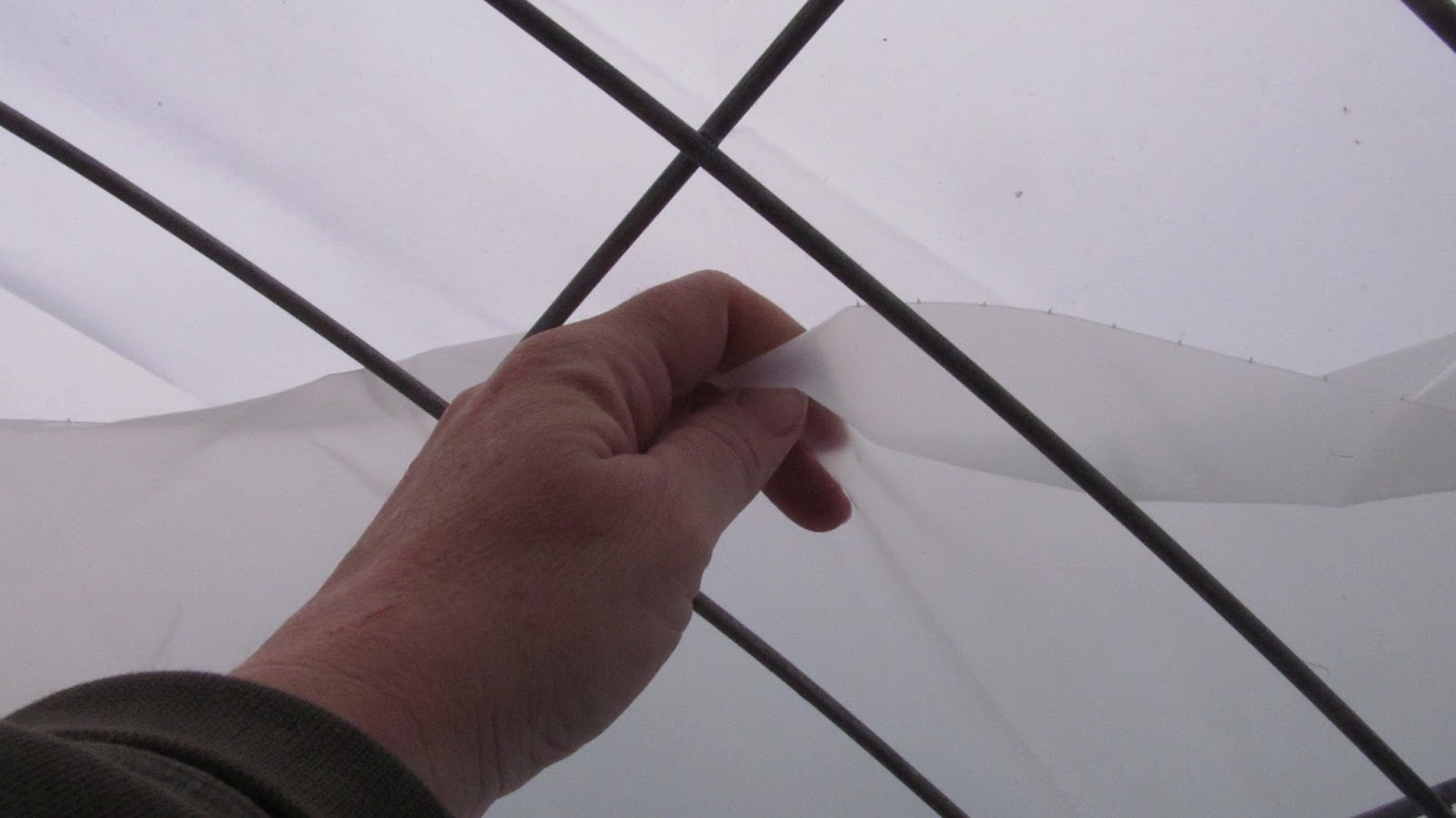 I pulled the end piece under the last hoop segment

Anyway, one of the problems with greenhouses is that they can get very warm. So having a way to let the heat out is important. Since the plastic wasn't permanent in my plan I figured I could just leave the closed end tucked in - and then untuck it when I needed to get some air flow going. 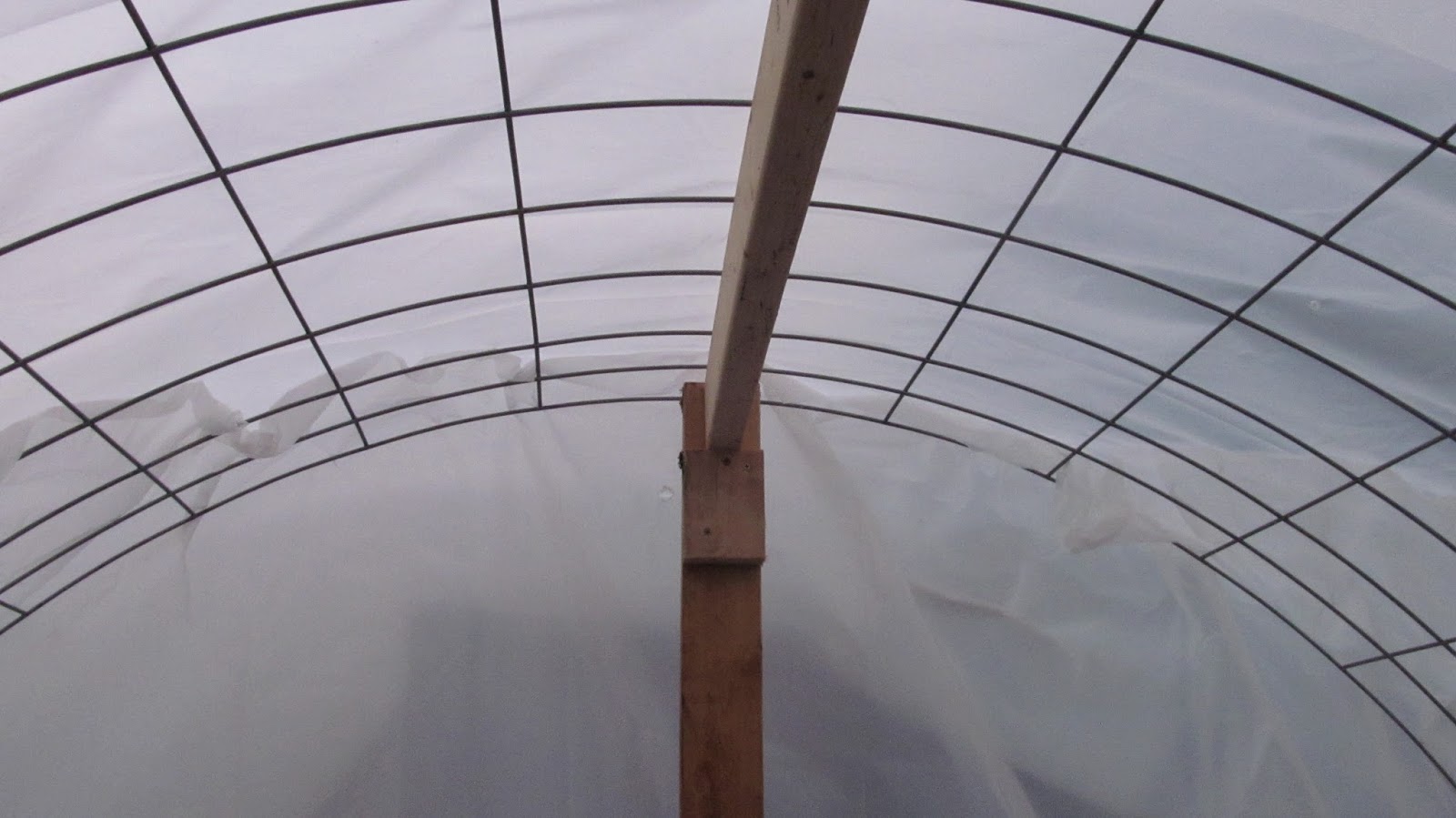 I tucked the end piece between the hoop and the last segment. Now I can open that end if it gets too hot.

I had a piece of plastic that was about the right size so I just tacked it along the bottom and pulled it under the last section. I knew that once that last section over the hoop was pulled tight that the end piece would be held in place. So far so good. 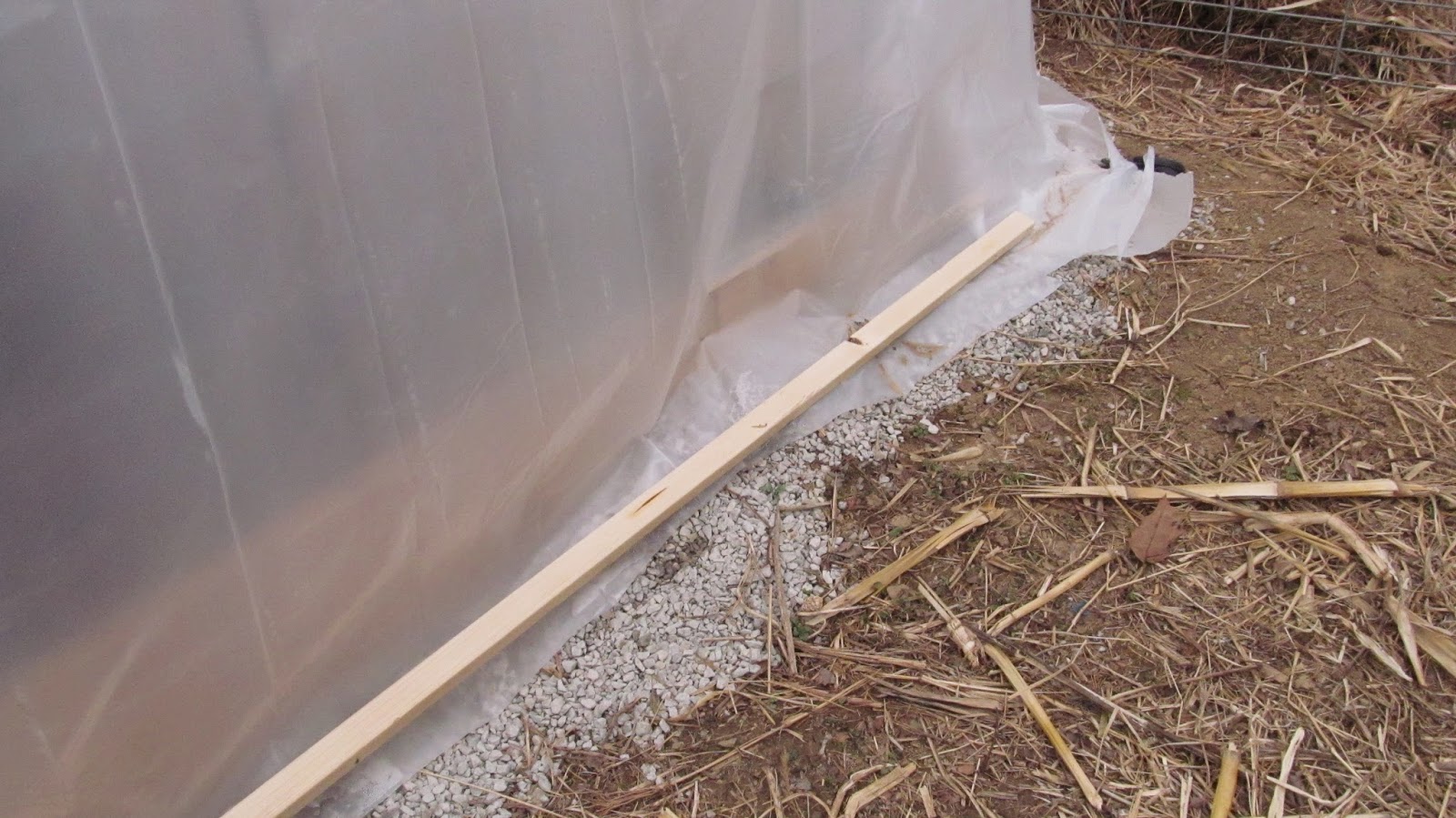 Trim off the extra plastic and lay out the furring strips.

Next I got my materials for attaching the plastic over the hoops. I had purchased several 1x2x8 foot lengths of furring strips for about $1 each. Working from the closed end of the hoop house I wrapped the plastic around the furring strips so the plastic went OVER the strip. 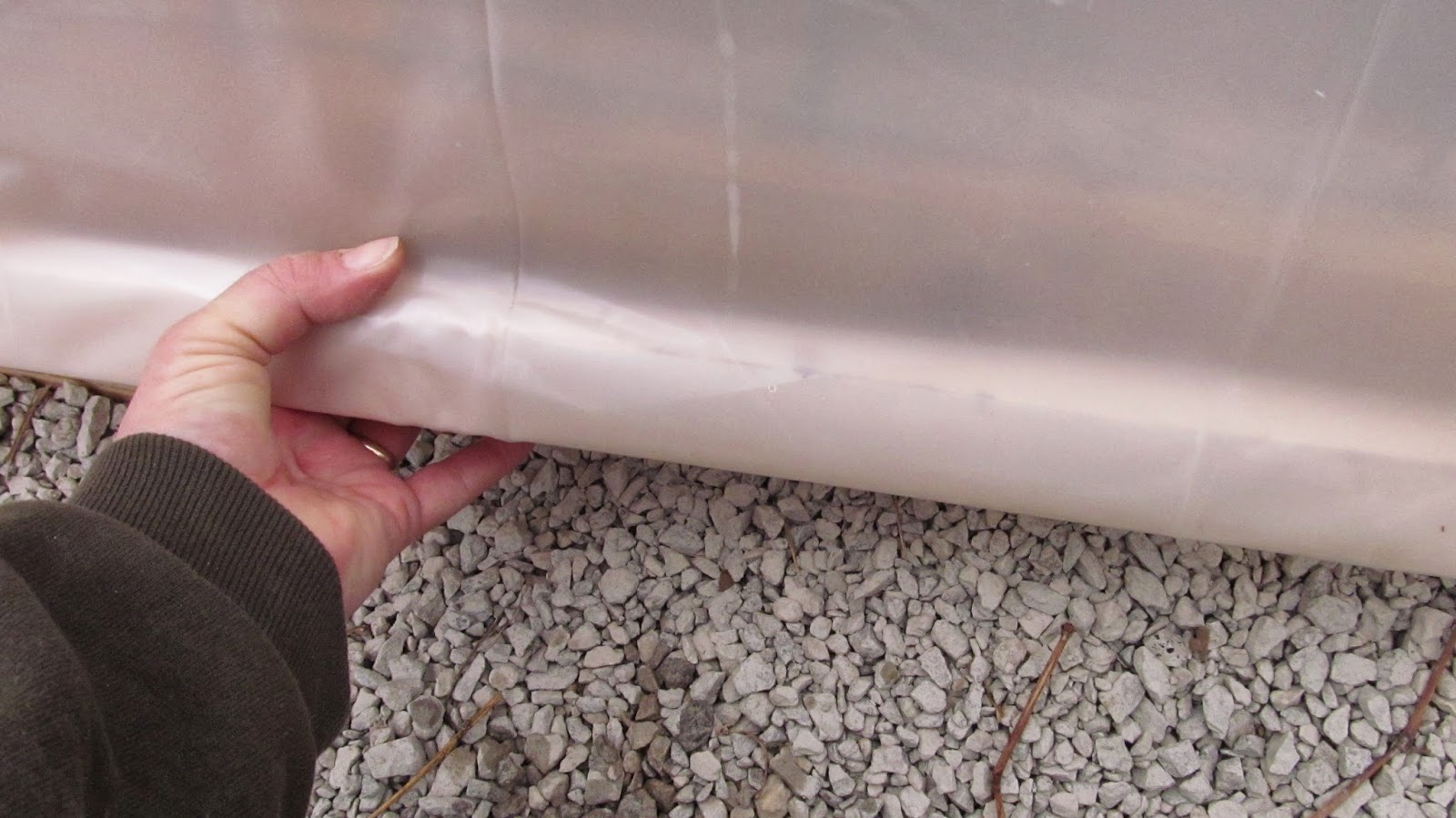 Roll the plastic over...

Yep. It was backwards from what you'd think... the plastic went over not under so that there was no "gully" between the side of the greenhouse and the furring strip. This way the rain will just sheet right off and not get into the plastic. Isn't that neat? You can thank Bourbon Red for that tip. 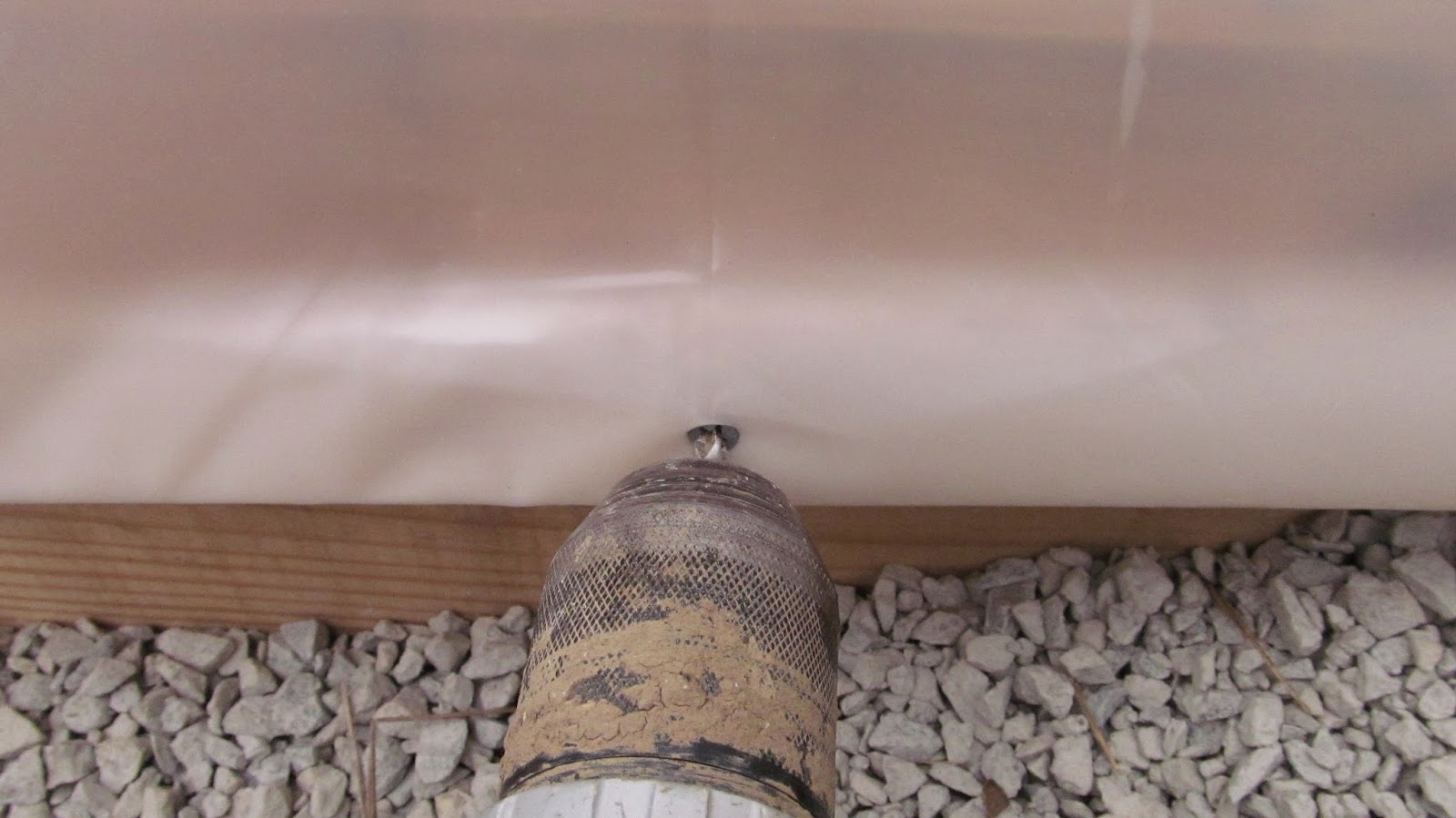 ...then screw into place.  See? No gully to collect water. 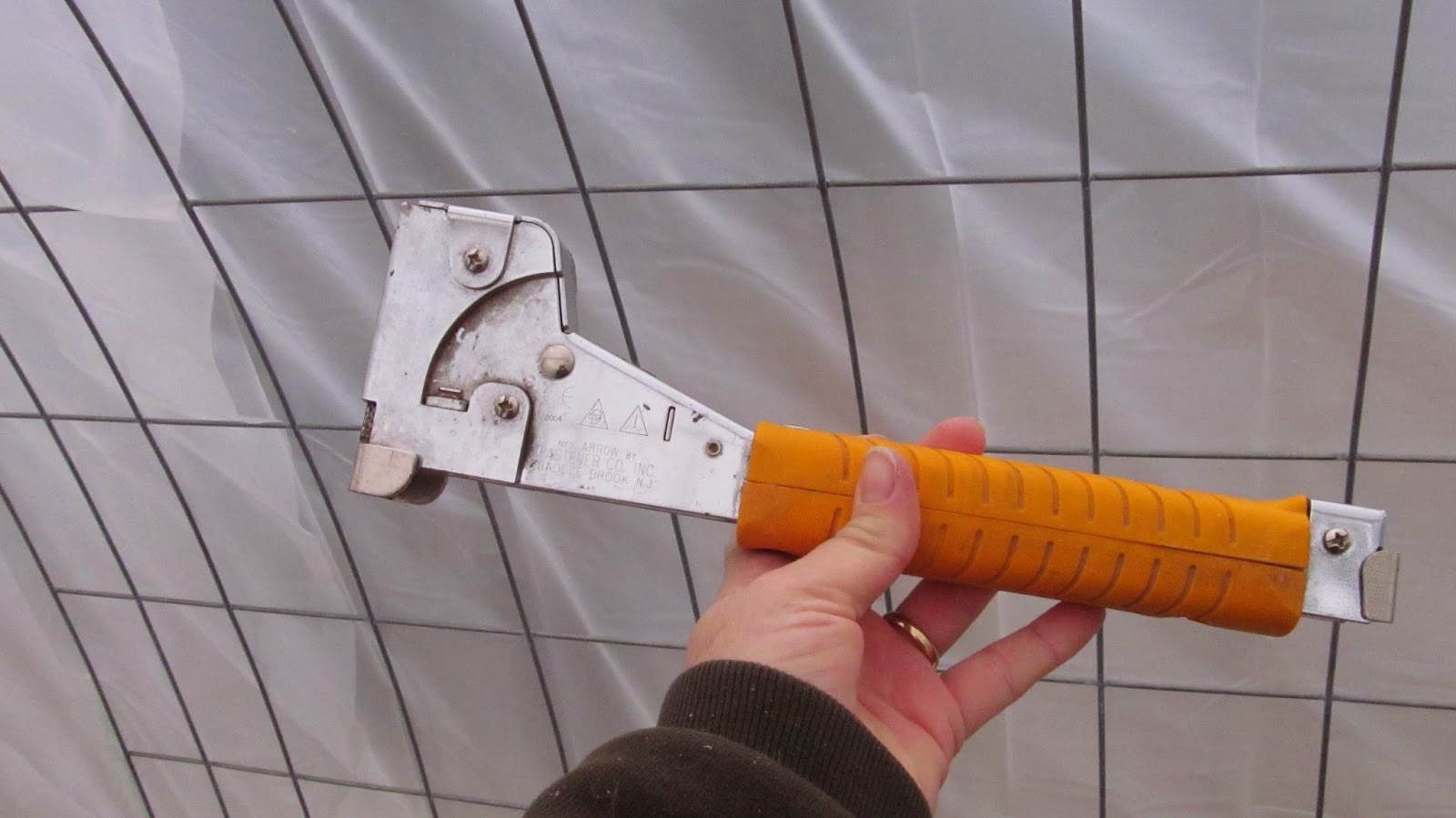 Next, I got to use my favorite tool. I call it "The Whacker" it has a technical name

but I tend to call stuff by the sound it makes. Plus it's totally fun to use. Whack whack whack! And the plastic was tacked into place along the furring strip. How great is that?

I did the other side the same way. This side was much easier as I was able to pull the plastic pretty tight over the hoops. So now I had the closed end covered and both sides secured. Last step was the door end.

I guess I should mention that along the way I built a door. I should have gotten pictures - sorry! Just cut two long boards at the same time on your saw so they will be the exact same size. Then three cross pieces. Lay them out, square them up, and screw together. I used 1x3x8's cut to size. 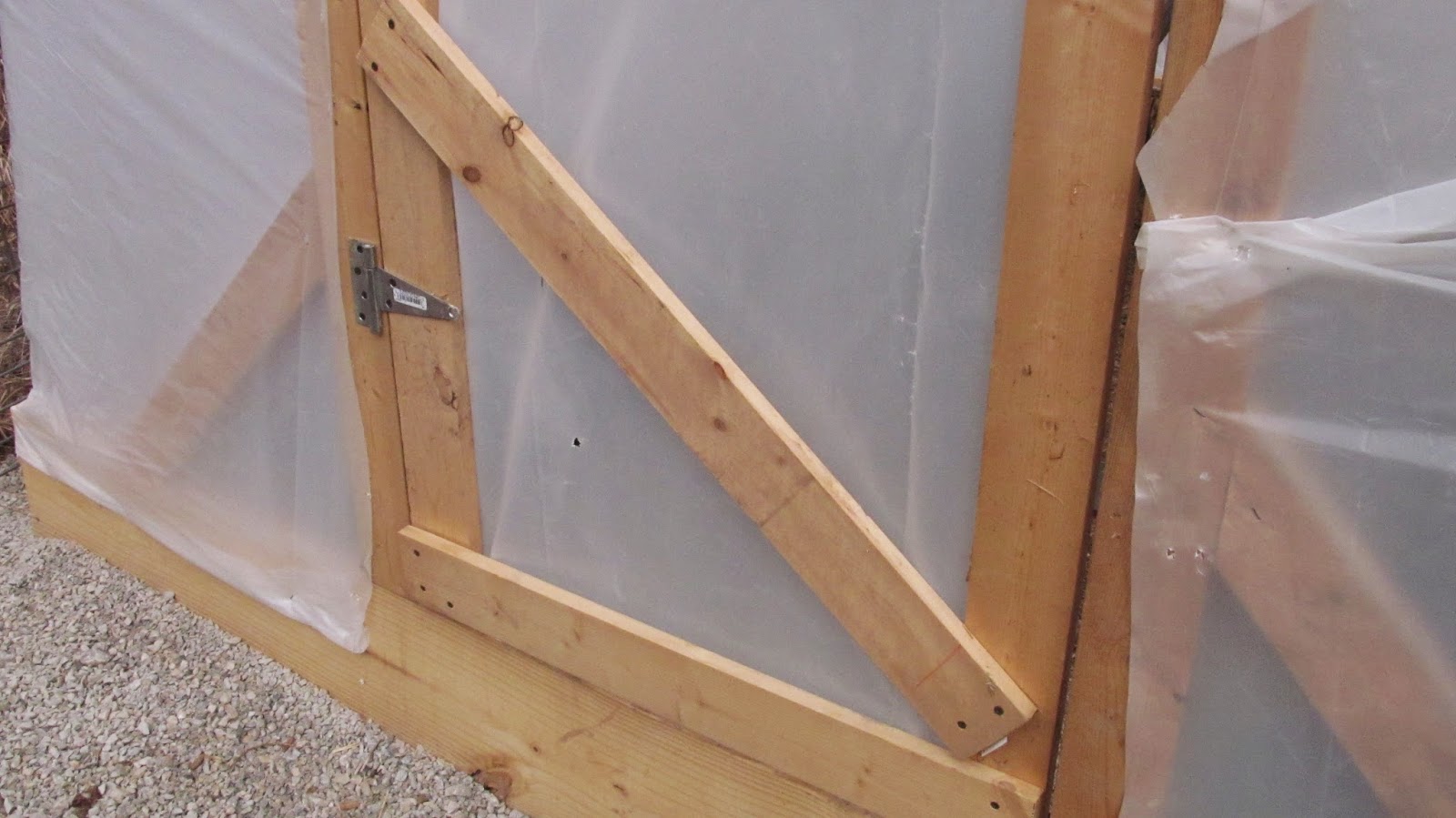 An angled cross piece goes at the bottom to give stability to the door.

I measured the inside of the door and made the pieces one inch less than the true measurement.  Doors tend to sag and get wonky so this gives you some room to play with. The last piece was whatever I had left, attached at an angle for stability.  I used The Whacker to cover with plastic. I dug thru a bucket in the garage and found a couple hinges and attacked it to the door frame. Done. Easy easy. You can see my extremely fancy latch.

Back to the plastic covering. 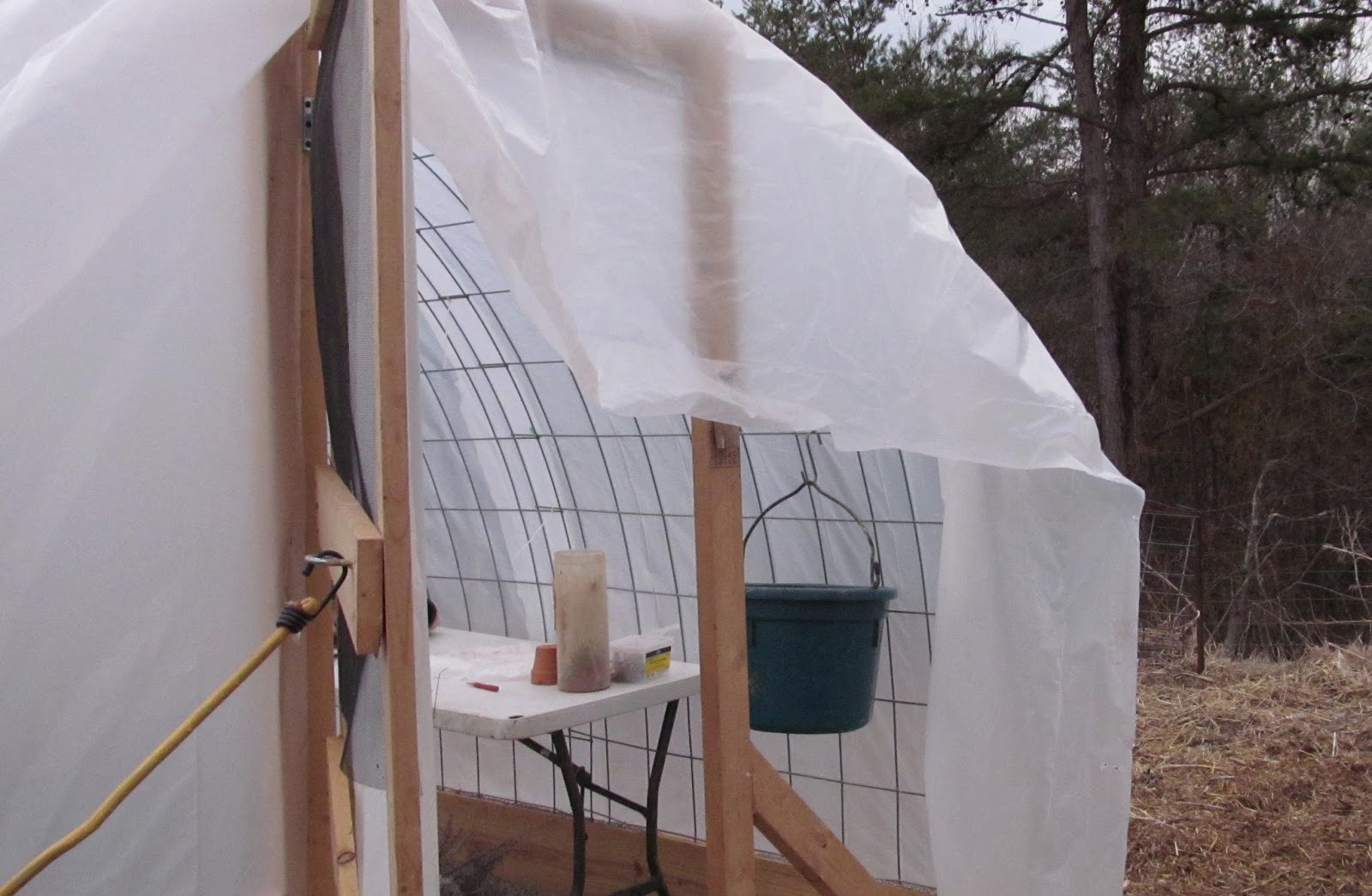 The plastic was draped over the front to make sure it could be tacked to the door frame.

My goal was to pull the plastic tight, gather it together, and tack it into place. This took some patience but once I got the hang of it then it made sense. Gather, whack, gather, whack... then the same on the other side. I need one more short piece of furring strip to go across the top of the doorway but I can get that the next time I go into town. 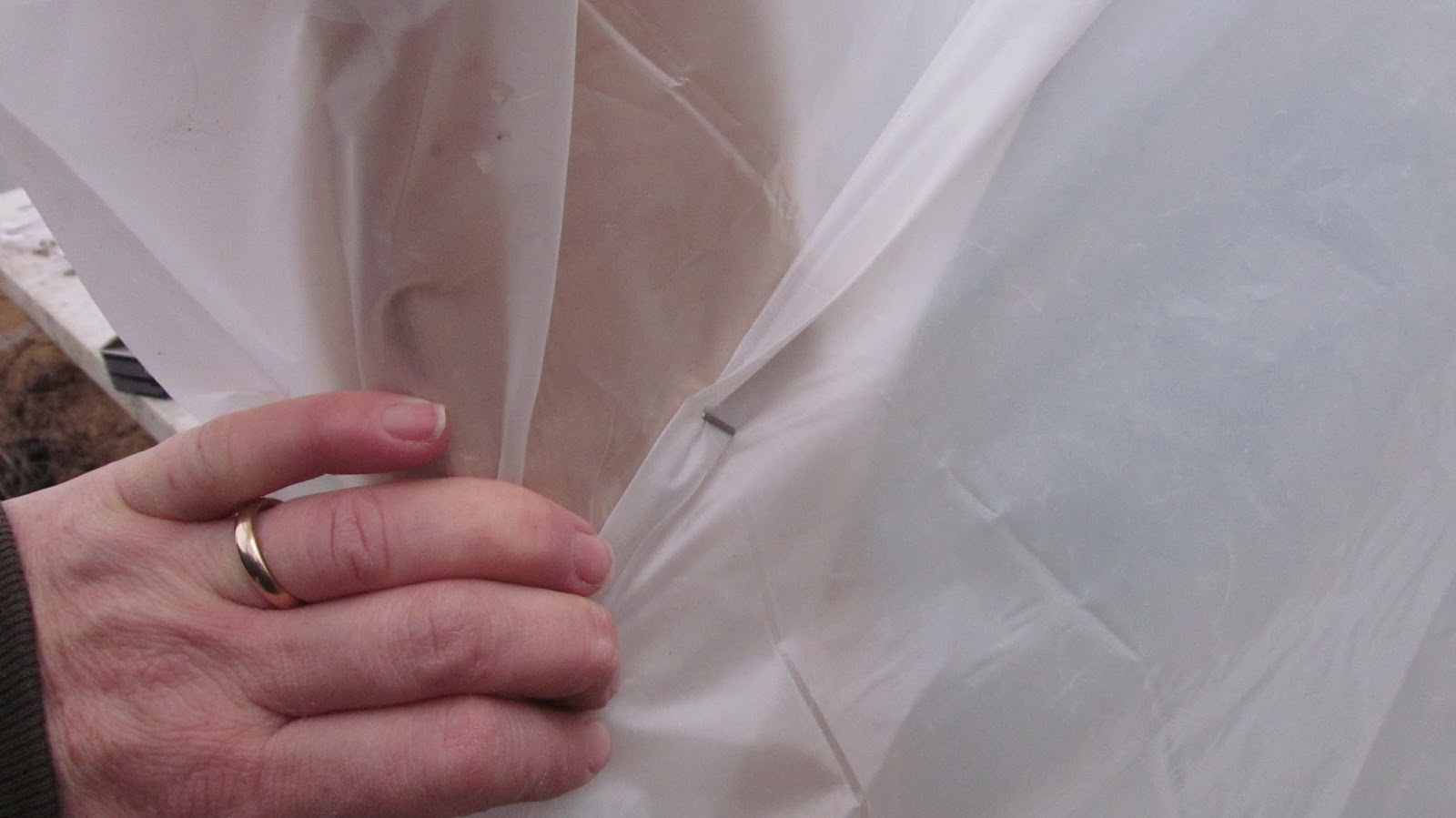 Gather the plastic together in folds and tack into place.

As I found out when I was tacking the plastic on the this end...the only thing that I didn't like about this design was that the doorway seemed a little loosey-goosey. So I used a board, attached at an angle, to firm it up. This solved the problem. Plus it will hold the plastic in place.

Then all I had to do was fancy up the place. 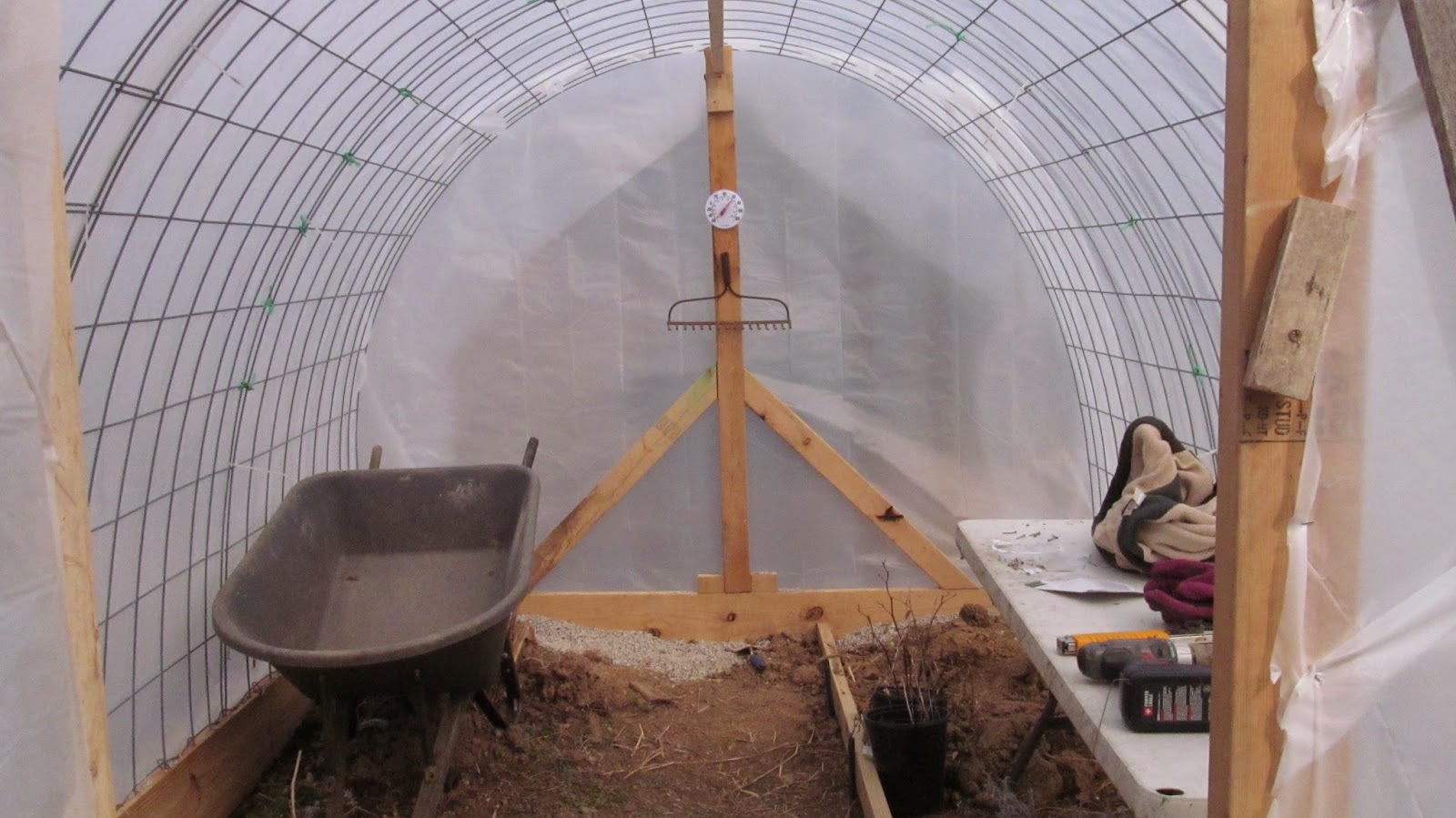 The wheelbarrow will be used to mix up the potting soil. 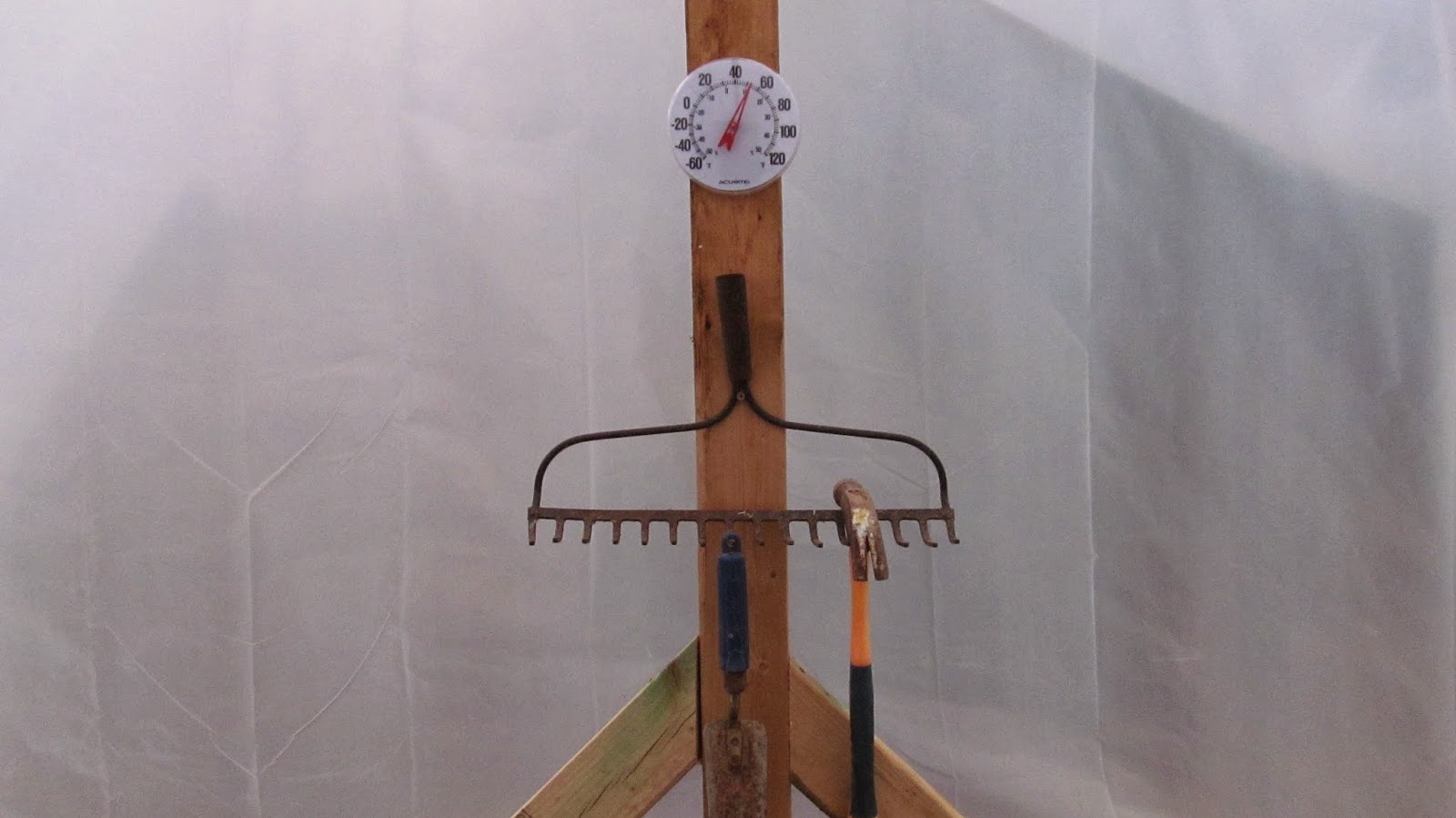 I used an old rake head for a tool caddy and added a thermometer.

I was going to get right to work... but then it started snowing. So I got mad and went in the house and started eating peanut butter out of the jar with a chocolate bar. Today.... today tho I have high hopes for a more productive day. 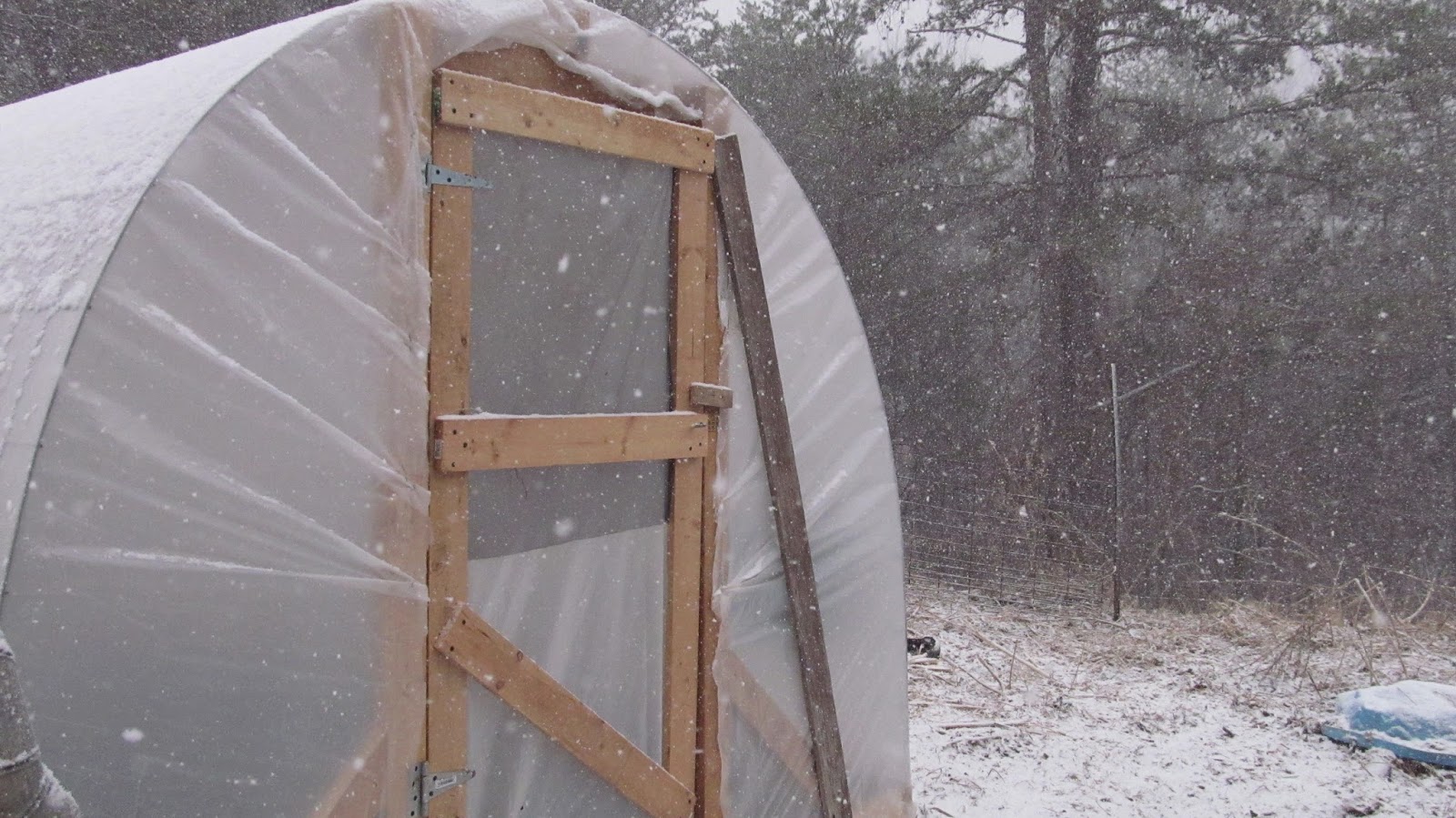 The snow was great. But see the last board I put in place to hold the door frame more securely?

Having a thermometer in the greenhouse was really helpful. Yesterday morning it was 14* but it was a little over 20* in the greenhouse. As for now I won't try and run anything electric out there but I'll try for some passive heating. Later, in the fall I'll try and different methods when I recover the greenhouse and us it as a season extender for some cool season veggies and greens.

What do you think, friends? Do you think you can give this a try? Are you getting ideas?

Happy Thursday everyone! This winter has to end sometime... and if not I'll just work in my hoop house.

It is eternally windy here- not sure if it would work at the farm, but I love seeing it and thinking how great it would be. This could be a disaster project if I were doing it!

Woot! Your first hoop house built! Great job! And cheers for PB out of the jar with a chocolate bar. No need to dirty a knife! :)