I know there are some folks who are trying out maple syrup making this year so I thought I'd give you a quick look at our set up. There are a million different ways to do this - but this is what works for us.

As a quick reminder, here is how we do our taps. We had about 15 gallons of sap as of Saturday so got our fire going while we butchered chickens - talk about a real farm day! And it was finally warm enough to be outside without being in a heavy coat and hat. In fact, I was in shorts - finally! But then I got cold. Good thing we had the fire going. 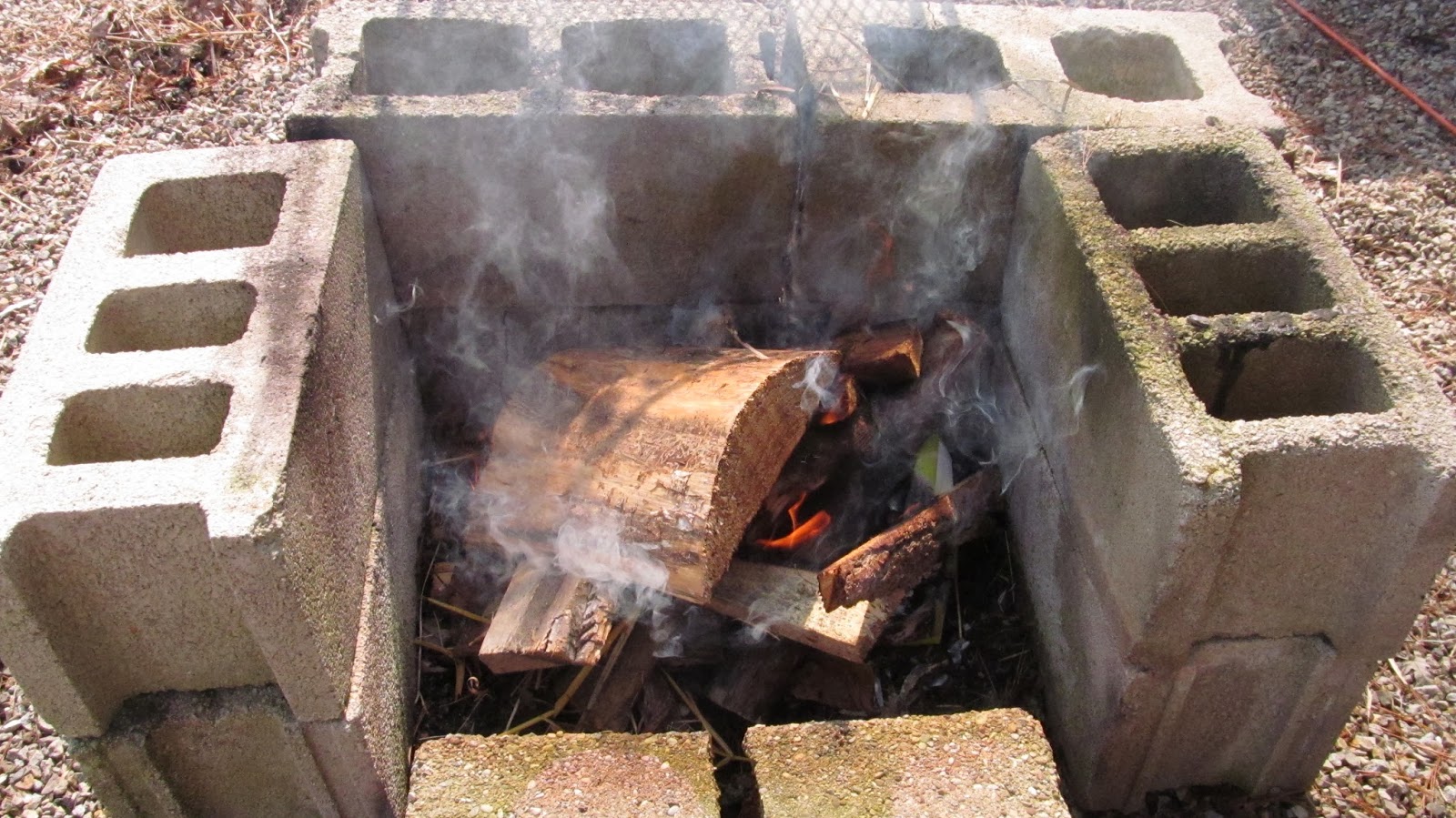 Our campfire set up. Note the block in front keeps the fire in.

We set up this campfire in the gravel by the house. It is just 9 cinder blocks I dug out of the junk pile down in the woods. I used an oven rack from an old stove and then some racks from a old (and well used) gas grill. I have some pots just for cooking syrup - so I don't feel bad that they are blackened and for outside use only.

We made a quick fire with kindling we had for the inside wood stove and then tromped down into the woods where we had plenty of well aged pine. Pine!?! Are you purists shrieking out there? Yeah well... sure it might give a bit of a smoky taste to the syrup but we like it and we have a ton of pine that otherwise would go for making burn piles for "whatever." Plus the pine makes an extremely hot and fast fire. 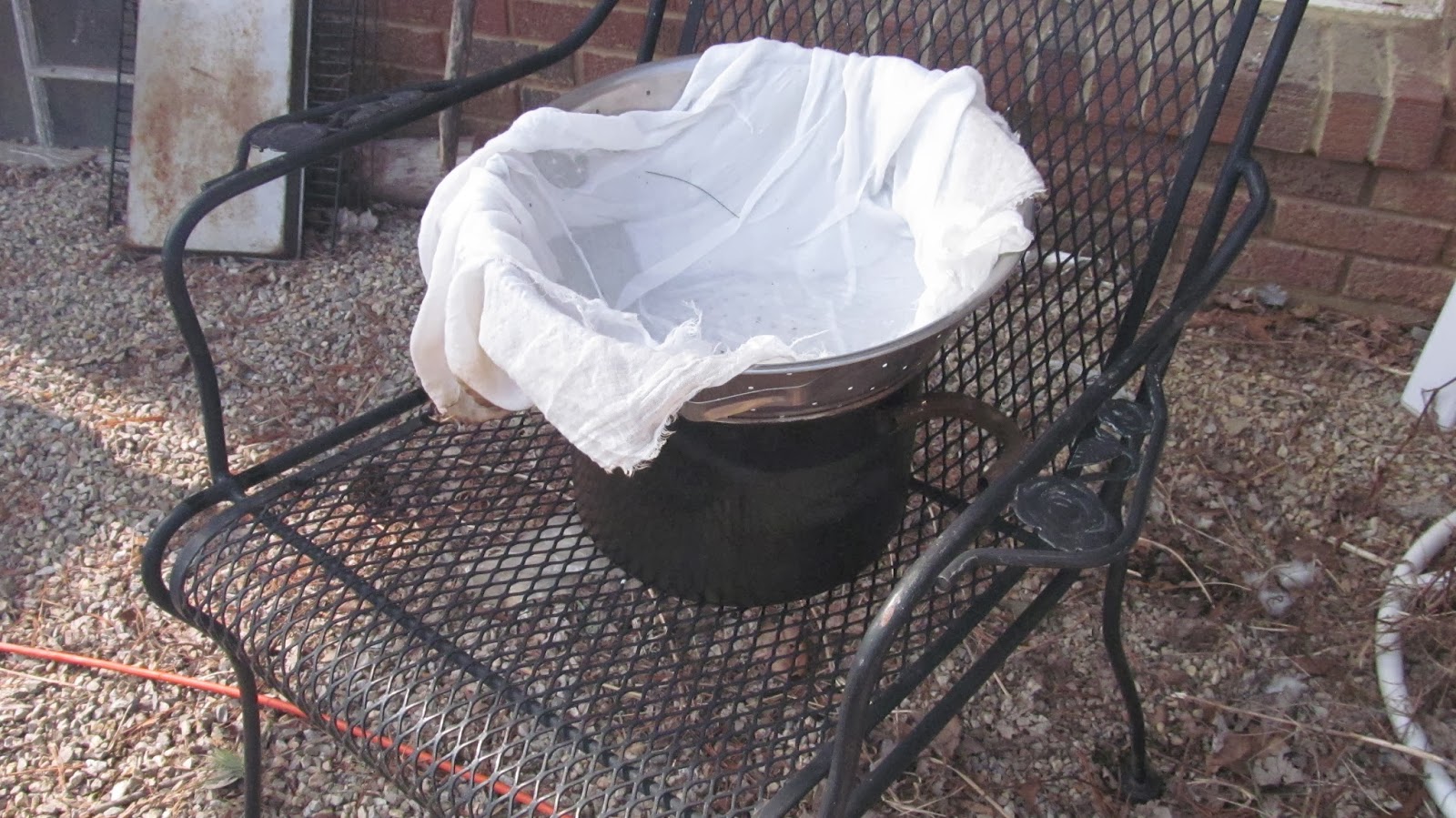 Use a colander and cheesecloth to strain the sap. I'll strain it again before it is finished in the house.

After we bring the buckets of sap up from the woods we strain it thru a big colander and some cheese cloth. Then we set the pots to boil. Unfortunately we got a late start on Saturday and then I also had a late-start-cook-fire on Sunday. I checked it this morning and we probably have about 3 quarts of sap-syrup that can be finished in the house. Unless I get at least 10 gallons of sap from yesterday/this morning then I'll finish the first pot of sap outside.

Why not just cook it down in the house?  You can. We don't. We don't have great ventilation in the kitchen and you need to boil down 40 gallons of sap for 1 gallon of syrup. Based on the sticky film I had to wash off last year.... we think it's better to cook it outside. Plus how great is sitting by a cook fire watching the poultry peck around?

But I will finish the syrup inside, that is, I will do most of the boiling outside but then when it starts to look rich and brown I'll transfer it into a new pot and bring it in the house and cook it on the stove until it is syrup. To do that you mark the temperature when it starts to boil - and then cook it until its 7.1* higher than that. Isn't that amazing? A higher than boiling point freaks me out a little - it's like daylight savings time. I know it exists and I go along with it... but I just can't figure it out. Unlike the time change, real maple syrup doesn't make me mad. But I digress. 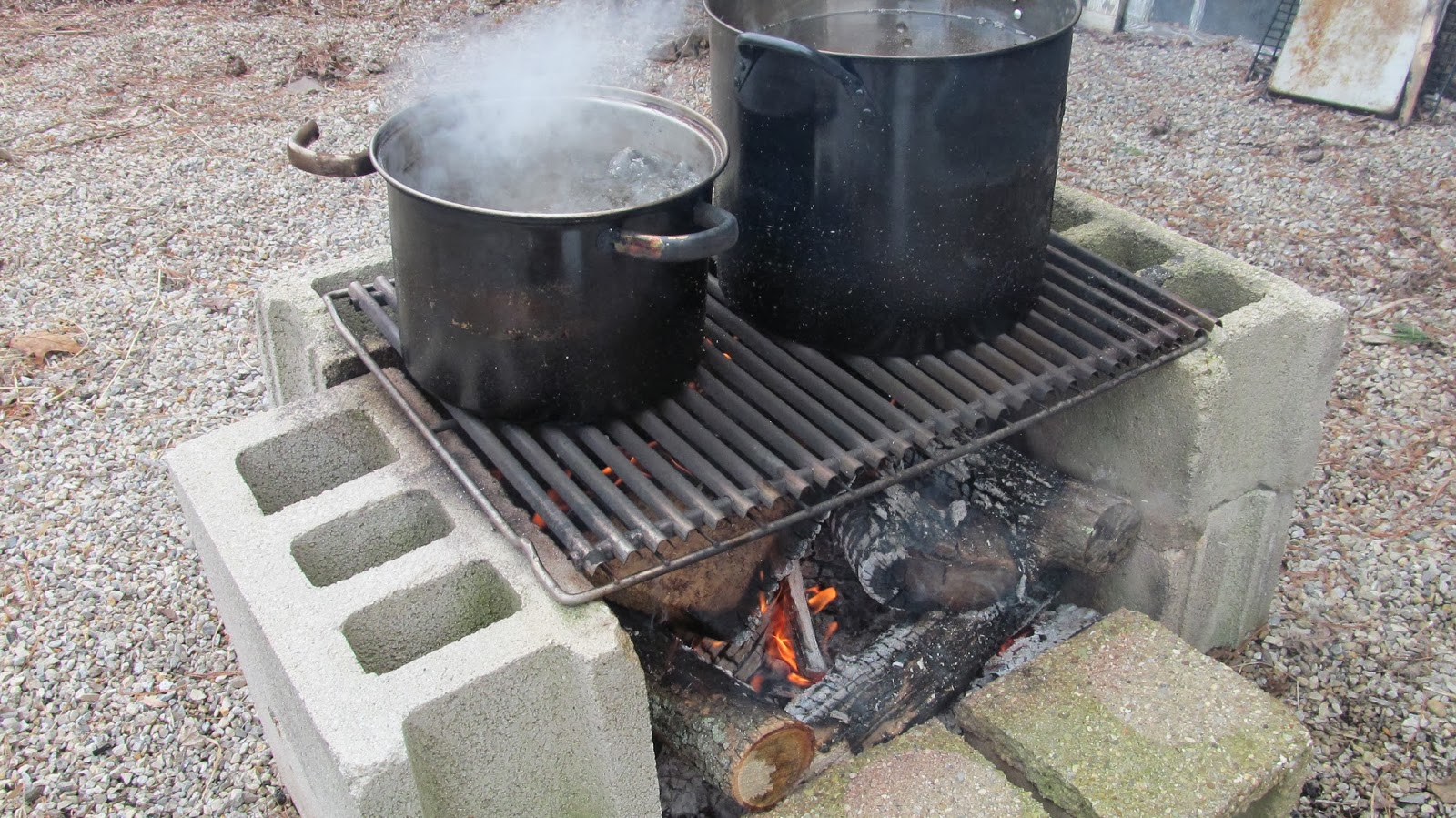 This is such a fun project that everyone should try it. The big question I get is "is it worth it?" Is it worth what? Learning something new? Having free food right there in your own trees? Working together to do a fun project? Relaxing around a fire? Effectively using otherwise useless already downed wood that is crapping up your woods? Imagining yourself triumphantly glazing an amazing ham that you grew butchered and smoked yourself with your own maple syrup?

Ummm.. yep. It's worth it. Plus at this time of year you desparately need some kind of victory to get you thru the last part of winter. There's "nothin' doin' " anyway and everyone needs to get outside and do something. So for us it's totally worth it.


Posted by Ohiofarmgirl at 7:07 AM

This might be a dumb question, but does the sap smell like maple syrup at all before you cook it down? If not, what does it smell like while you're cooking it? I've never collected it or anything, so I was just wondering. I know pine sap smells really nice but it is so sticky. I wonder if it's possible to boil down pine or other kinds of sap and make something.

hi Amanda! it's not a stupid question at all! um.. it looks just like water but is a little sticky. it kind of smell faintly sweet. but once you start cooking it down then it really concentrates - then you get to the maple smell. real syrup isnt like Mrs Butterworths or whatever cheap stuff you get in the store. its more fluid and has an earthy smell/taste. i'll have to figure out how to describe it. i might have to make some french toast. you know... for science. ;-)

My friends do maple syrup as well. We have boiled the sap just like you do, but ours was way too much smokey. Boy help might have something to do with it.
They found an actual evaporator pan with a wood stove underneath it. Slick as can be. They use that now and they do produce great syrup. They have also invested in a hygrometer? It looks like a stainless test tube with some type of thermometer or other measuring device with it. I think it is worth it as her syrup is just wonderful.