How to make pudding

Last nite on 'the facebook' we had a hoot making pudding for dinner. I couldn't come up with anything else to have... so I figured pudding was a fine choice. When I put it out to my pals they decided that butterscotch was the way to go. 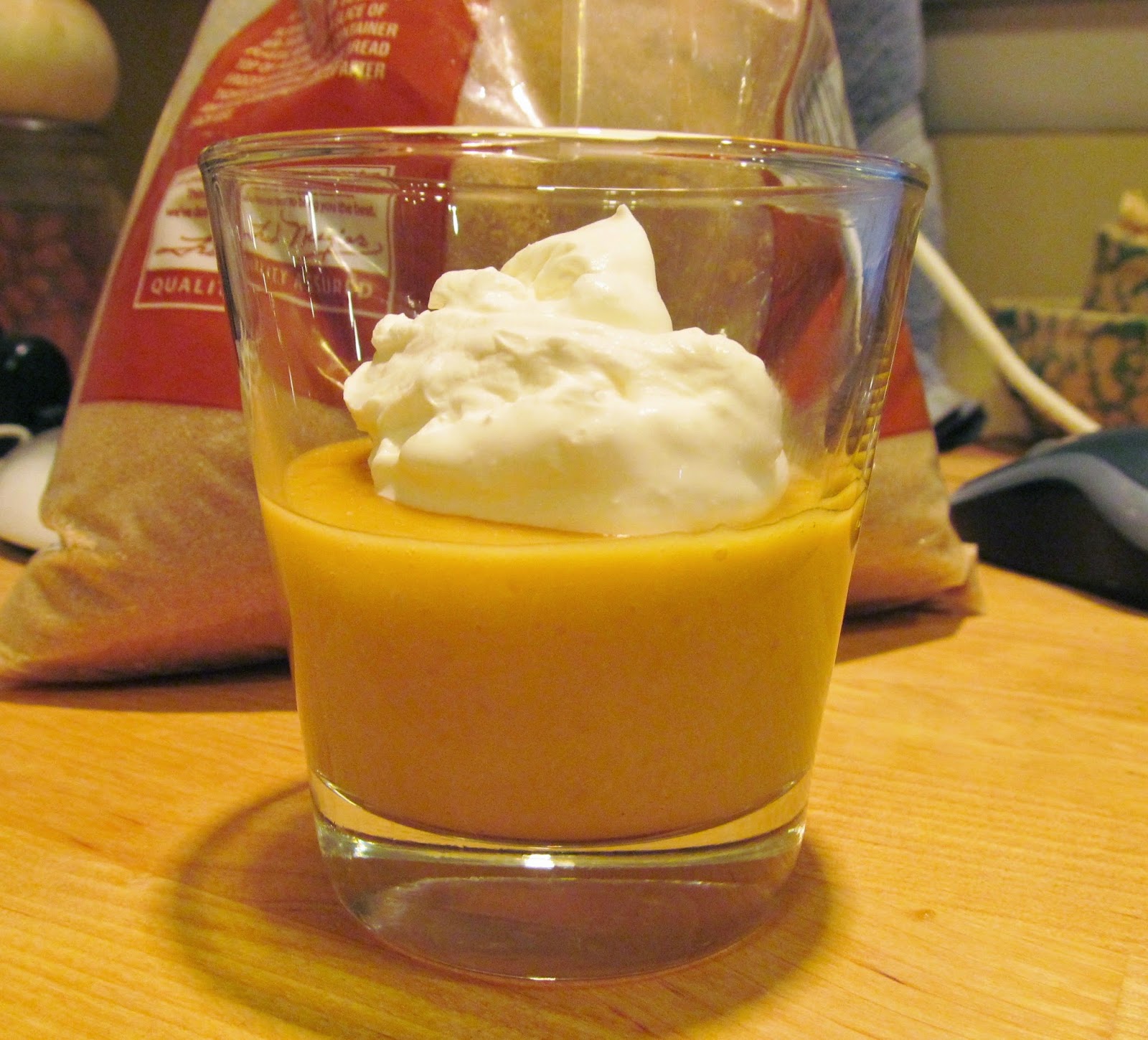 I learned two things about making butterscotch pudding:
1. There is danger involved. I did not burn down the house making the caramel sauce.
2. It actually has booze it in - they weren't kidding about the "scotch" part.

This is a great recipe and I'm glad I tried making it. I usually only make vanilla or chocolate but this was a really fun project. Normally I can't make a caramel sauce but this worked out - and I did not burn the house down. The only adjustments I made to the recipe were that I only made a half batch...and they had grievously underused the booze in this.... so I added a bit more. We ended up not being able to eat this butterSCOTCH pudding by an open flame and this one of the few treats that is not a breakfast food. Wow!

One of my pals asked about tempering the eggs (I was giving a play by play of this project). Basically that means to gently heat the eggs or you will end up with scrambled eggs and not a soft, silky, luscious custard. Someone else (thanks L!) provided a great 'how to' link to the tempering process.

I've been making custard for so long that I kind of forget that "pudding" to a lot of folks involves a little plastic cup or a box of mix. So I thought I'd share my how-to which is based on my Grandma Minnie's custard recipe. I believe the technical difference between custard and pudding is eggs. This is a custard due to the eggs... but I just call it pudding. 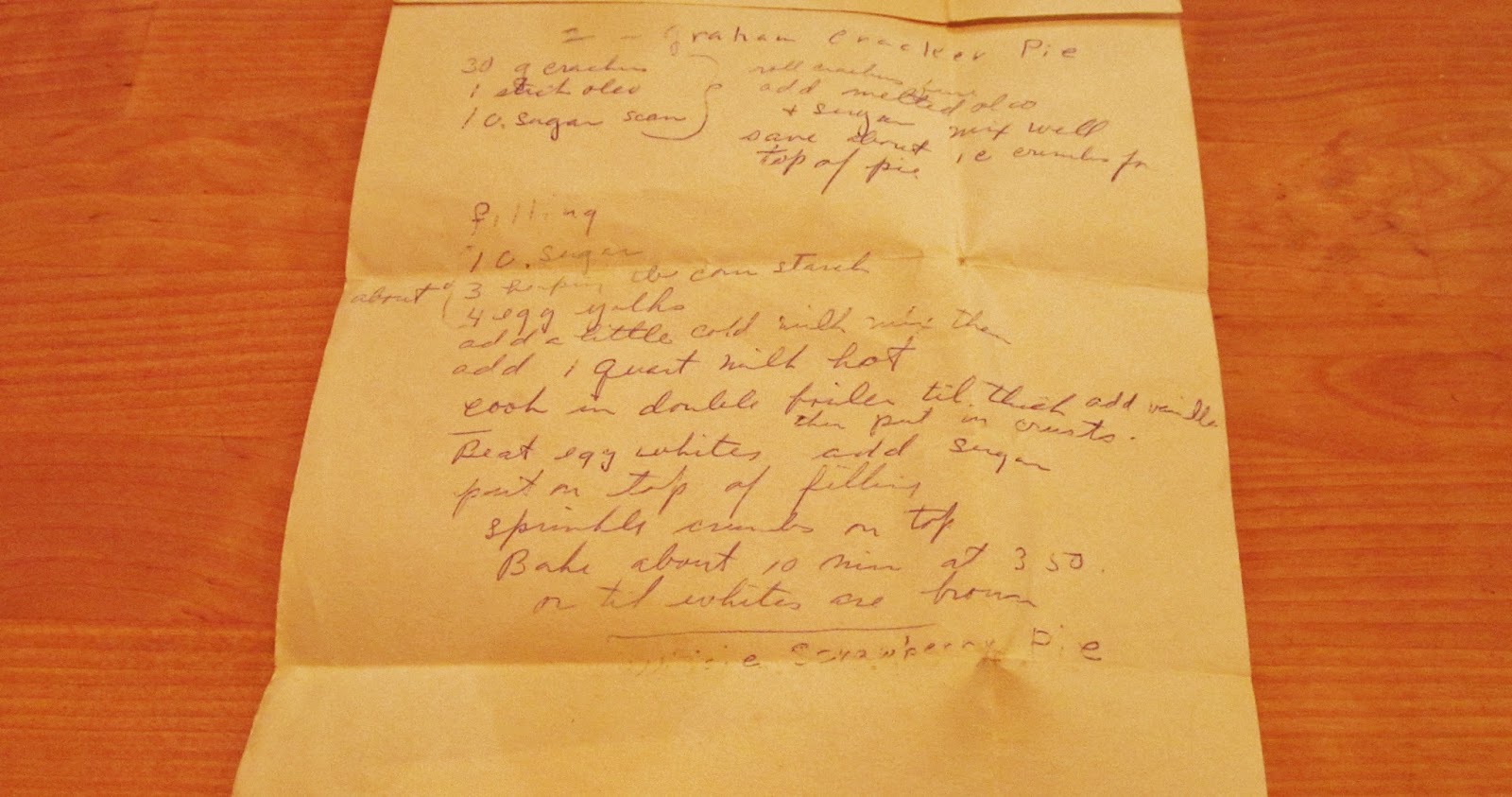 We'll put a disclaimer here that some folks will burst into flames over the "uncooked" eggs part of this...but my eggs were still warm from the hen so I'm pretty sure they were extremely fresh. Don't die of salmonella or whatnot. If this makes you nervous then be sure you cook your custard or just make pudding instead. How's that?

1/2 cup sugar
2 heaping Tablespoons  cornstarch
3 egg yolks
2 cups of milk - you will divide this in the course of the steps
vanilla - big splash
salt - just a dash
chocolate - 3 Tablespoons of cocoa plus some chocolate chips or good chocolate broken into pieces.

Before you do anything get a nice glass bowl and put in a big splash of vanilla. If you are making chocolate pudding then also put in some chocolate chips (1/3 or 1/2 cup?) or some really good chocolate broken into pieces. Have this standing at the ready by your stove. 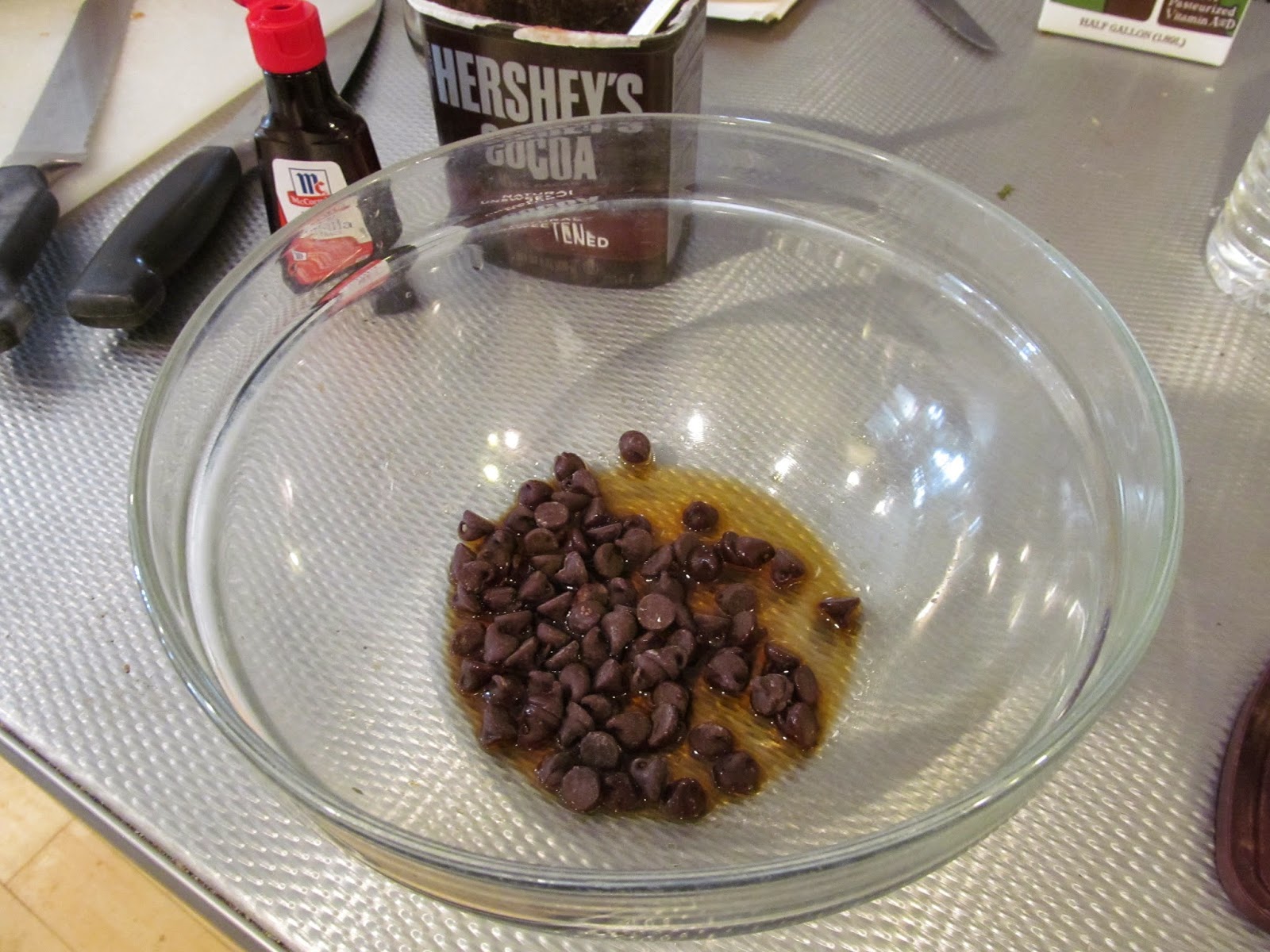 Put some chocolate chips and some vanilla into a bowl. You'll need this later.

Get a heavy pan and whisk together the salt, sugar, cornstarch, and egg yolks. Add the cocoa if you want chocolate pudding. Add a little cold milk from the "2 cups of milk." How much? I dunno...some. Enough to dissolve the dry ingredients. Let's call it about 1/4 cup.

Put the rest of the milk in the microwave until it's hot. For my microwave that means about 1:30 minutes. Don't scald it. 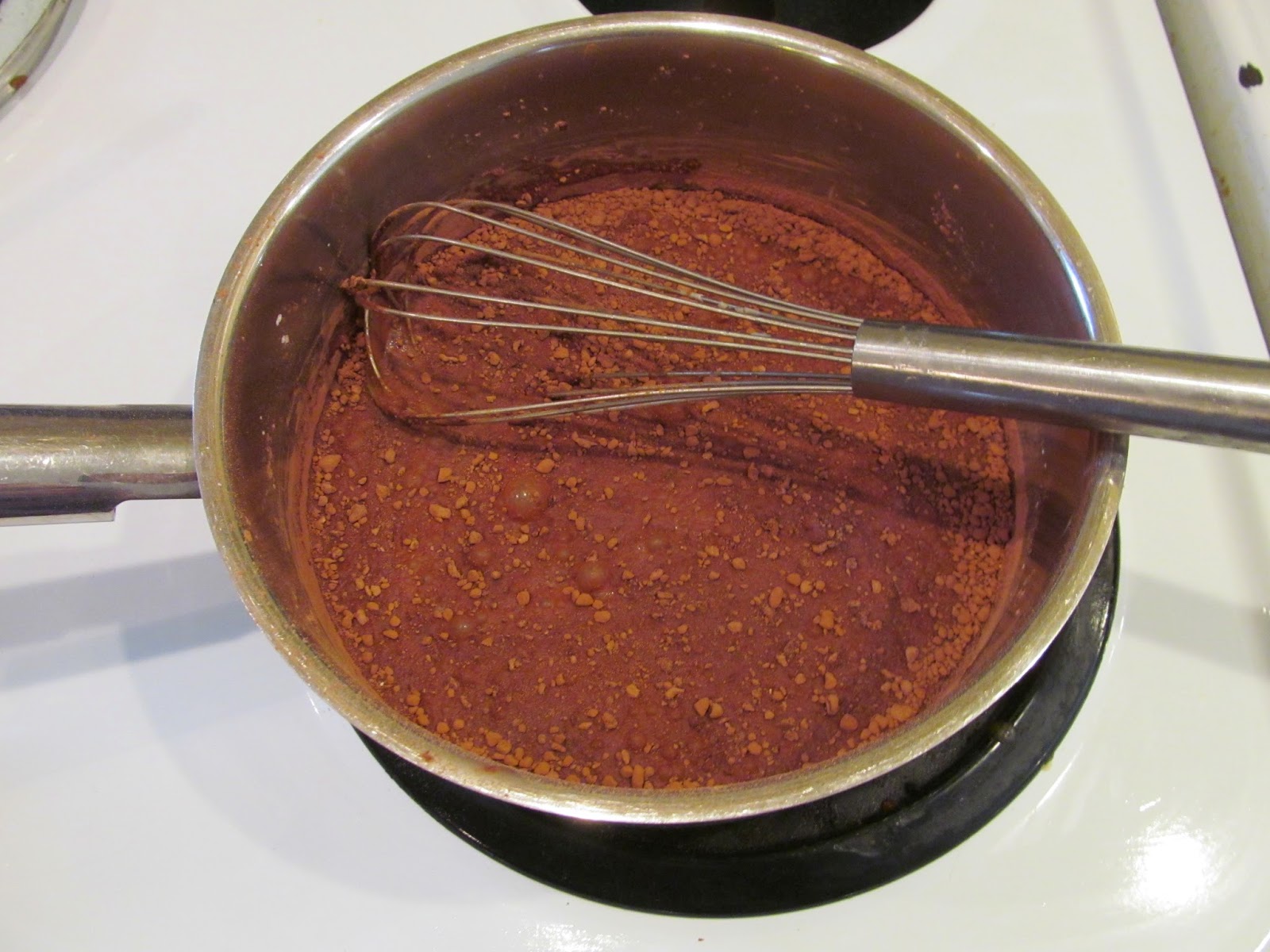 The sugar, cornstarch, salt, and cocoa.. mixed with a little cold milk.


Start to cook your egg mixture over very low heat...like a 3 or a 4 on your burner dial. Just until the sugar dissolves and the mix starts to come together. By now your milk should be hot. 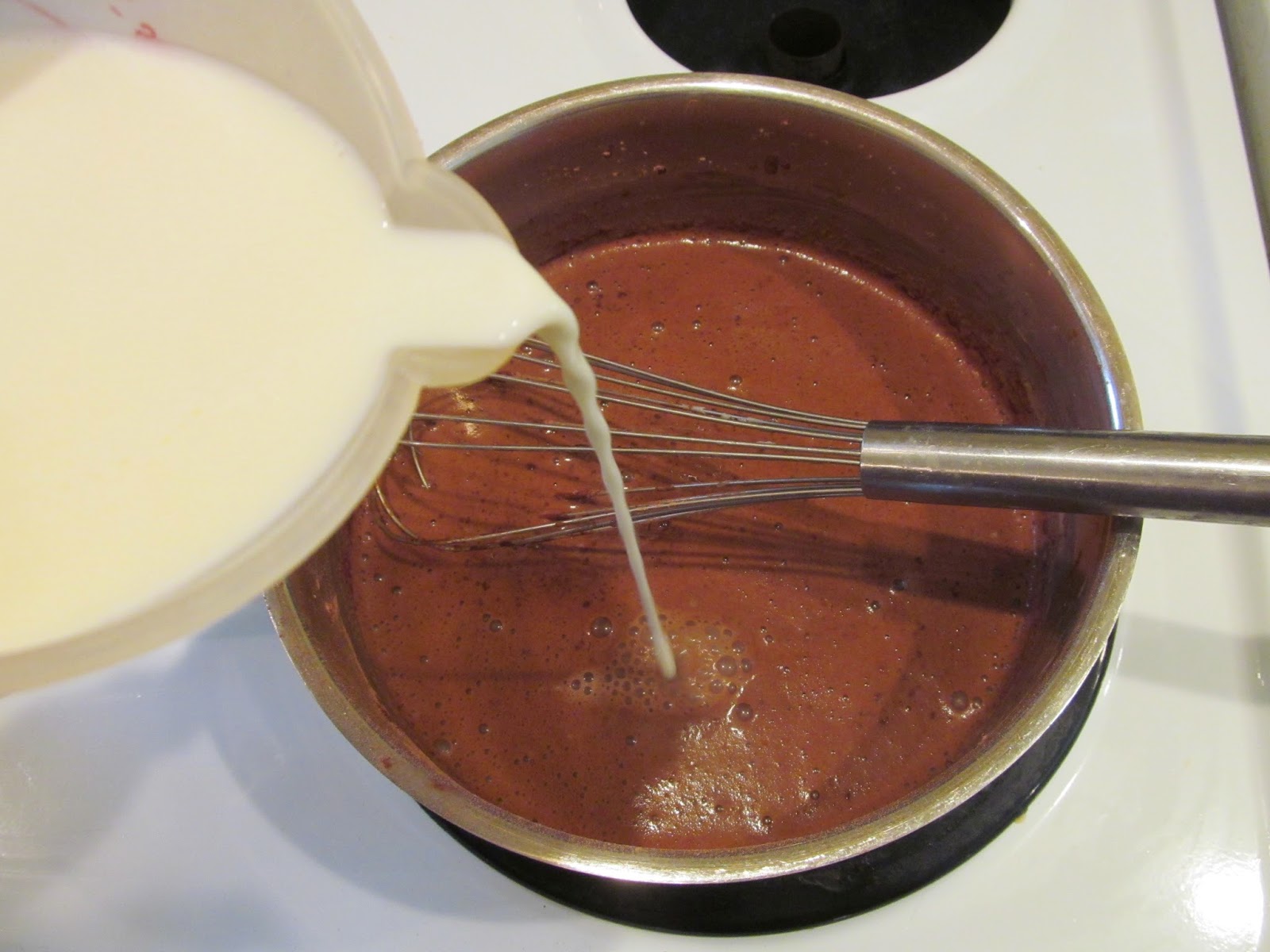 Start with just a little hot milk - like a tablespoon. Add a little at a time. Keep stirring!

Now we are going to temper the eggs. Pour about a tablespoon or so of the hot milk into the warming egg mixture. Stir with your whisk. Stir like you mean it. Then add a little more hot milk... just a bit. Keep on stirring. Then add a bit more.. a little more - maybe about a 1/4 of a cup. Still stirring? Keep it up. Add another 1/4 of a cup. Don't stop stirring! Are you crazy!?! Keep stirring!

Now your egg mixture and your milk should be about the same temperature in the pan... a couple more "add more milks" and all the milk should be mixed in. 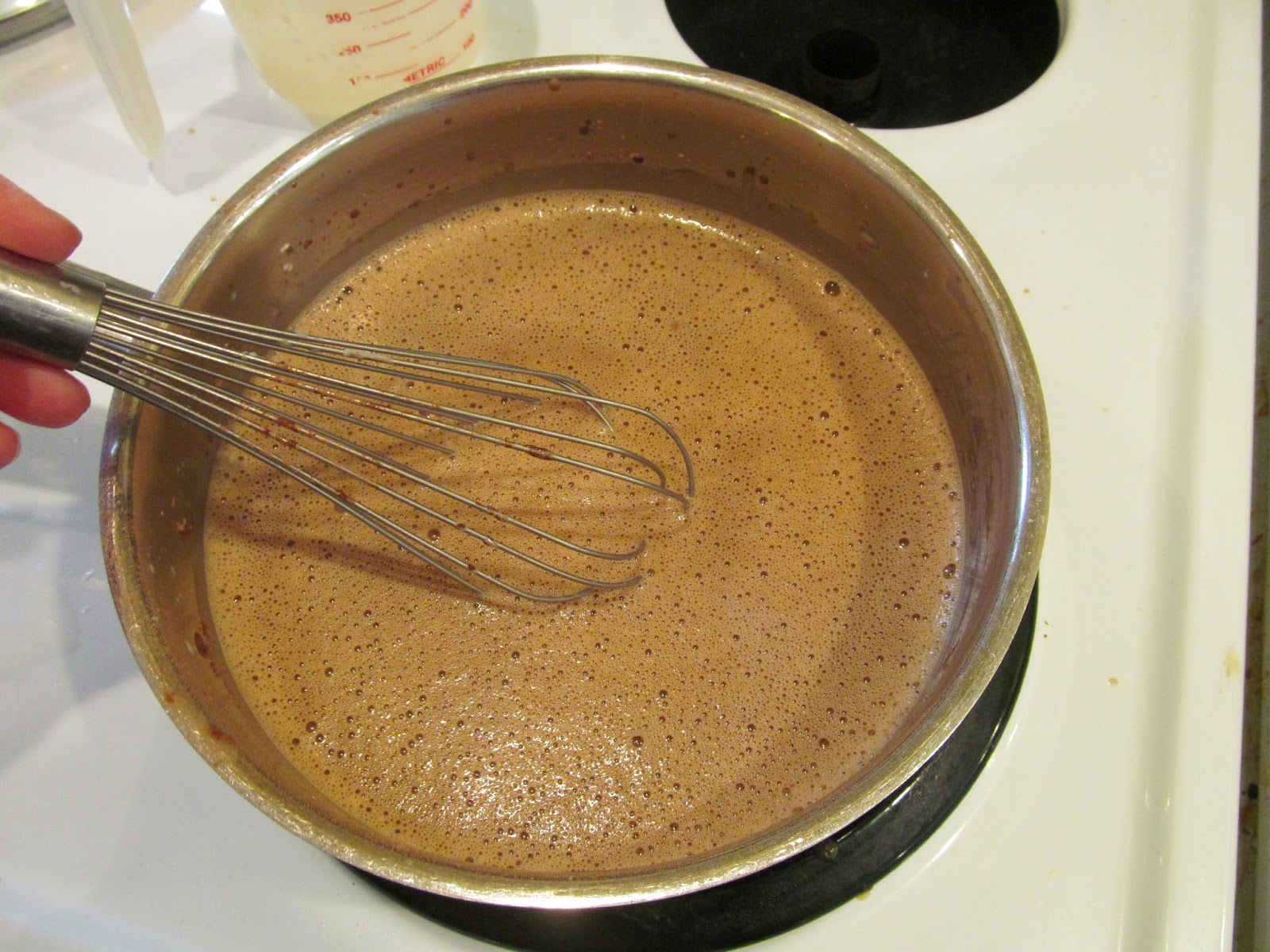 It's OK if it's frothy. Note how there are bubbles all over the top of the mixture.

Don't freak out of it's frothy. In fact, that is awesome. Watch the bubbles - this will help you see the custard cooking and will let you know when it's done.


When you first start out the mixture will be foamy.

Now stand there and stir that custard - not in a frenzy - but keep it moving. Don't walk away from the stove. Don't talk on the phone. Just stand there and stir. You might be there for about 7 minutes. What else are you going to do? You can turn the heat up a bit, but not more than half way.

Then, miraculously, you will see that the mixture is starting to thicken up. The bubbles will kind of disappear and you'll see lines in the mixtures from our whisk. This is it! You are getting close!


Then it will become pudding.

That moment when your mixture becomes custard is nothing short of magical. Yay! How do you know it's done? When it's nice and thick and starts to hold it's shape. It will thicken up some more when it's refrigerated. 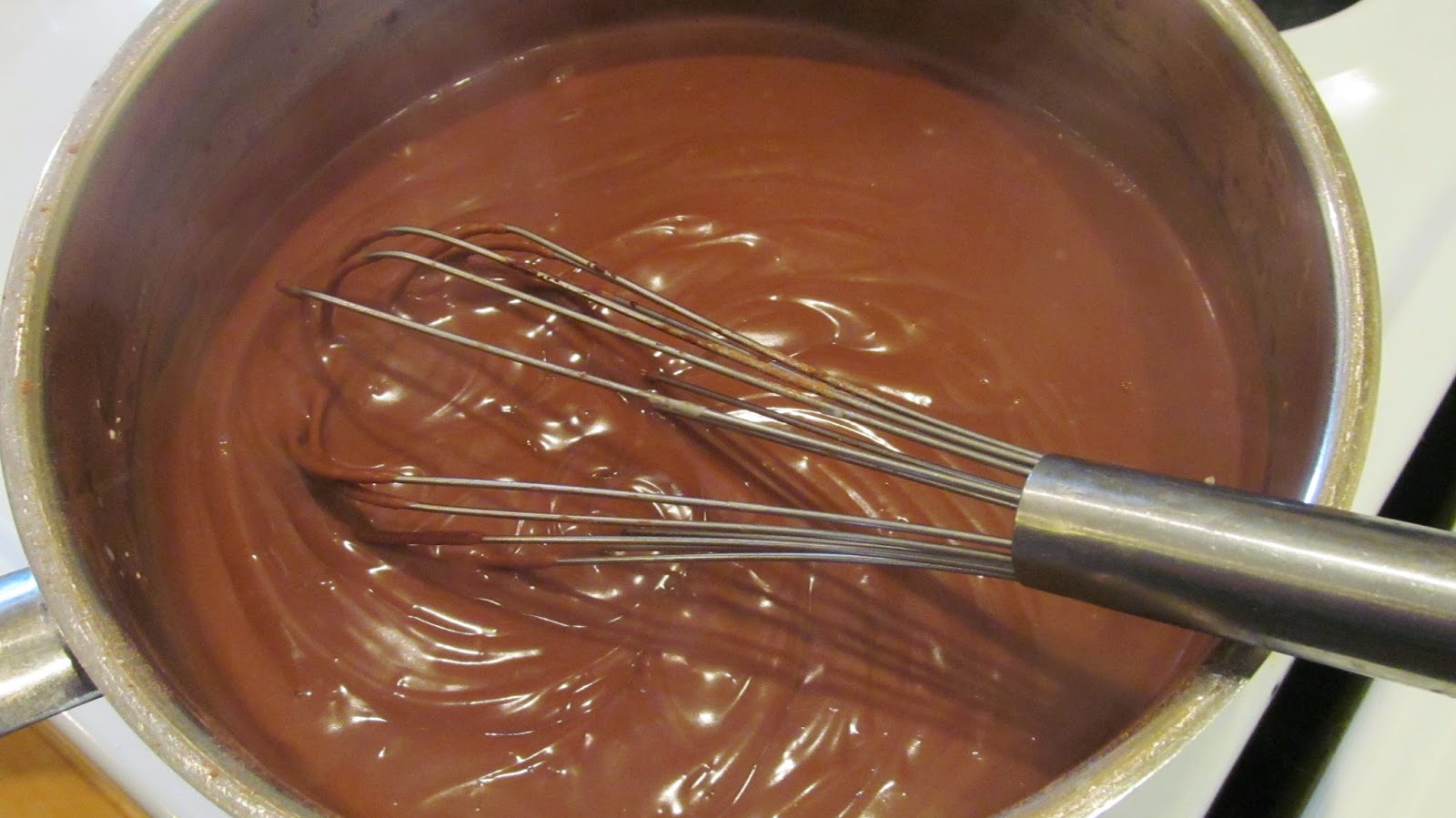 See how the custard holds it's shape? The lines from the whisk stay visible?

Keep stirring and take your pan off the heat. Carefully pour the hot custard into the bowl. If you are making chocolate you will need to stir in the chocolate chips or good chocolate until they are melted. Mix to incorporate the vanilla. 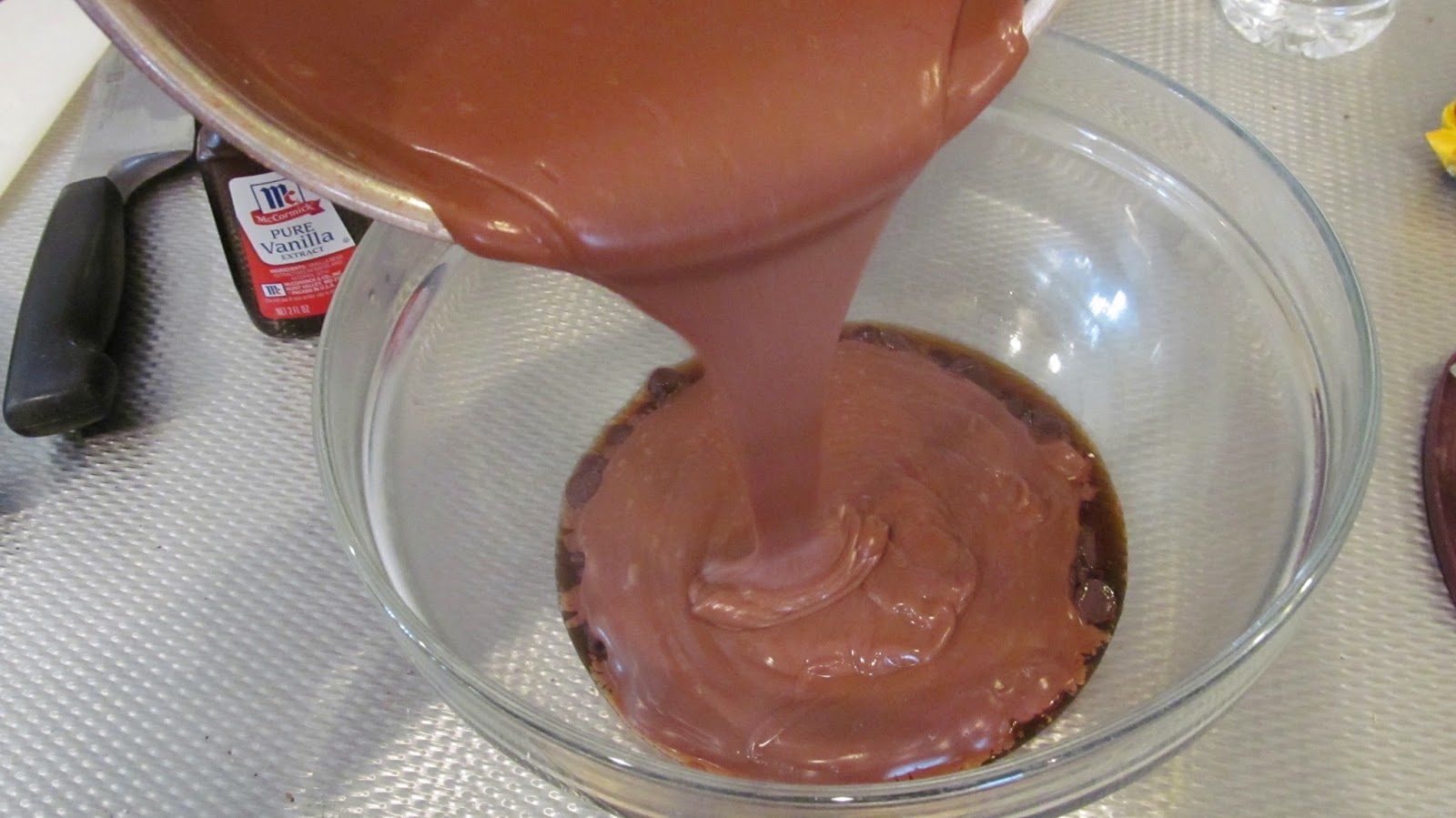 Pour the hot custard into your prepared bowl. Mix until the chocolate is melted.

Voila! Pudding. I like to eat the hot custard but that freaks some people out. So cover the bowl and let it chill in the fridge.

See? That wasn't so tough, was it?

Posted by Ohiofarmgirl at 3:16 PM

Good idea, I've made some from scratch too, not hard, just sir and don't overheat, it'll scorch...

That looks delicious. It's been a while (read years) since I've made pudding; I think you've inspired me to make today the day!

We love pudding for dessert, but most of the time I make my mother in laws old chocolate pudding recipe which Cowboy loves! Love all these!!!!