Moving the Meat Group One

Yesterday I worked on my project to de-stankify the garage. We've never had this many meats at one time and they are making the garage unlivable. Unfortunately, they are too little to put outside. They are not entirely feathered out and while a hawk probably couldn't fly off with one of those little meat balls... they are kind of sitting ducks for anything else. 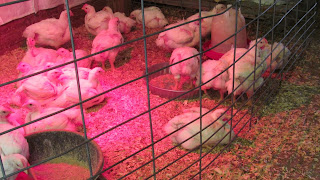 The new meat pen - easily whacked together. You can make anything with hog panels.

Our solution was to build another meat pen at the end of the garage with the big sliding door. This way we can get some fresh air into the garage and also provide a way for them to go out and toddle around next week.

Because the War on Rats continues to rage - and gets worse in the fall - we don't want to put the meats over in the Turkey House just yet. But we couldn't take the stank much longer so we think this is a good short term so solution.

I tacked a short piece of hog panel into the garage wall beam, used a heavy dirt "tamper" as a support at the other end, and used bailing twine to lash the whole thing together. It actually works remarkably well.

I filled in the new pen with fine pine shavings from TSC and then set up their feeders and waterers...and their heat lamp.

The only tricky part was moving that much meat over into the new pen. My big idea was to flush them out with a broom and funnel them into the new pen. My hubs decided it would be better just to carry them over. We used a box to move a few at a time and got them installed pretty quickly. 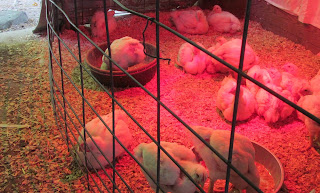 The pen opens toward the barnyard. I can easily open the pen and let them out.

At first they were terrified at seeing The Whole Wide World. And then some "wolves" that came over to check them out. Kai and Zander thought they looked delicious.  So I put a blanket over the "open to the barnyard side and that calmed them down. Kai and Zander had to go and sit on the deck now that they know where the meatballs are located.

Today I'm shoveling out the old pen for Meat Group Two who will be moved from the brooder. Earlier I went to get more pine shavings... so now I gotta get at it.

Posted by Ohiofarmgirl at 11:23 AM

How many chickens do you raise a year? To me that looks like a lot of chickens.

hey PJ! yep. this is a lot of chickens for us. i think there are 20 or 25 in the first group and 15 in the second. zoikes! normally we would have better meat management and have a certain number of chickens in the freezer, be looking down the barrel of a huge pork harvest, and then have a smallish group of winter meats. but since we'll have smaller pigz this year - and probably later - we needed to backfill with extra meats. i think this year our total for meats is about 75 - 100???? maybe more because we were butchering meats into January this year (i'll have to check). so we are chicken heavy this year, no turkeys, and we'll be light on pork. i that all makes sense?
TL:DR..... this is way more meats than normal.

Good luck with your chicken project.....you are most certainly starting to organise your meat management better. As for us, Lester is worming the sheep today, so that in a month's time we can start getting nine of them into the freezer, but not all at the same time of course!

Wow! That is a lot of chickens. I thought we might start out with about six and see how it goes. Last year we raised four laying hens. I really enjoy having the eggs. Also they did a good job of keeping the garden weed free over the winter. We want to try to raise a little of our own food and so we are starting in some small ways to do that.

you can totally do it, PJ! in the spring you'll be able to buy a few meats from the feedstore - i think the minimum is six (at least in our state). and see how that goes for you. remember that, until recently, we do buy meat from the store. at all. well, ok maybe lunch meat... but we only eat what we have/grow. hum... i think you may have just help me write my next post!
:-)

I guess I do a kind of mental meat management here… I aim for a deer, a lamb, half a dozen ducks and a handful of local chickens in our freezer each year. Do you reduce your poultry numbers in the fall for overwintering? Do you take that into your meat goals numbers or are those “bonus”? Yay meat!
One more question (sorry) - have you ever put one of your geese in the freezer?

no problem CTF! we usually do one round of meats for over winter. honestly we kind of like winter meats better - they are easier to keep warm then to cool down in the heat of summer. plus summer butchering is #sogross. but we've never done more than 15 or 20. so this is a lot for us. we also have to be mindful of our freezer space. we had pigz that were so big one time that we had to but another freezer! but this year's pigz will be smaller due to how late we got them. we overwintered pigz once and it was horrible. (for us the pigz couldnt have cared less). and nope we have never butchered our geese - ducks yes but not geese. for no reason other than they are always looking at us weirdly...and then they got too old. now we are stuck with them. ha!
:-)