Killing Cousin It... with fire.

When we first moved here we quickly learned that the previous owners had intentionally planted every single noxious, invasive plant known to man. I'm sure they thought they were just installing easy to grow plants. Nope. They were growing my own personal hell. And I'm allergic to all of it. Wormwood, wild ginger.. it's all horrible and everywhere. 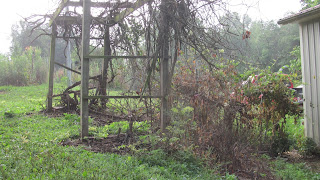 Sure they didn't intentionally grow the poison ivy and sumac that is everywhere... but they sure didn't do anything to stop it. Don't even get me started on the honeysuckle. Or the Virginia Creeper.

But the wisteria.... they did that on purpose.

We call it Cousin It because it's shaggy, misshapen and completely out of control. We were pretty sure it was about to pull the trellis over at one point. So something had to change. Cousin It had to go.

But to answer your question, the the goats wouldn't eat the damn thing...and I'm not particularly sure it would be good for them anyway. So that was not an option.

At first I just started trying to keep it trimmed. Later I started hacking away at it to cut it back to a reasonable size. Then it started fighting back. It got everywhere. 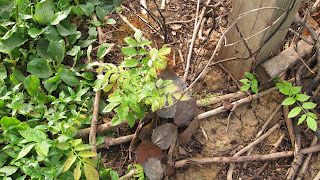 The vines sprouted up 30 feet away. Then they came up on the other side of the garage. That was the point where I was just about done. This winter I went out there and used the sawsall to cut the major branches and the base trunk hoping the freezing temperatures would help kill it. Then I started cutting back all the new sprouts. Mowing it down? You betcha. I had some success but it just kept coming. Then I decided to fight it mano y mano.... with fire. Me and Drogon went out there to do battle.

I'm not saying that it was wildly successful. But I am saying that I've finally put a dent in it.

The hard part is that the birds build nests in the upper branches. So I had to be careful not to have any roast chickens or whatnot. I concentrated all my fire power on the base of it. I think we may have success if I keep up with this this summer. 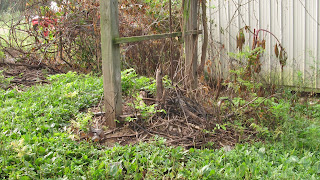 Operation Carthage is next.

It has to die at some point, right?  Because my next step is Operation Carthage and I will salt the ground around it until there is nothing but a barren wasteland......

Happy Wednesday everyone! Are you fighting the good fight?

Posted by Ohiofarmgirl at 1:51 PM

I hate wisteria. I hate that shit with a white hot passion. And it keeps popping up all over the place!! We have tried most of your tricks. (Not fire. Living in a subdivision - fire bad.) We dug it to the bare bones and used some sort of root killer. It worked on one invasion but it seems to have morphed in the second to become immune. Maybe it is some sort of Borg plant. I feel your pain.

the Borg! yes that is exactly it! resistance may be futile but i have a lot of propane and i'm not afraid to us it!
:-D

I have a problem with the neighbors blackberry vines growing over my fence. Every time I try to cut them down they come back twice as strong. Right now it is about to cover my chicken house. I can't use fire but I sure do feel like it.

PJ - we dont have very many blackberries here. not like you have there. they sell for like $6/quart! they arent just growing along the road. so i kinda miss them. but not if they were covering my chicken house.
:-)

We made the mistake of planting trumpet vine and silver lace vine. Both will survive the apocalypse. Though I love wisteria it has destroyed our pergola. We have trunks that are the size of a mans biceps. My husband has hacked and it laughs at him.

First, i loooooove wisteria. It's so beautiful, come drop it off at my place. Second, pick some blackberries while you're here. We have more than I have ever seen and I'm managing to harvest about 10% of them. So. Many. Blackberries.

Sorry, but I love wisteria, and shall be planting some next year. The worse invasive plant is the blackberry. It is everywhere, and is now growing along the new fence lines we have done recently which means that in a year or so the fence may risk being pulled down by the weight of the brambles. At least wisteria drapes gracefully over things, has pretty leaves and flowers, and does not scratch you with its prickles!

i can feel it out there, Carol, mocking me and just waiting for me to come back...

CTF, i will take all of your blackberries. they dont grow here like you have them. ugh!

Vera, this one is just a nightmare. i think i'd like it if it was out in a field somewhere and i could get it to grow up a tree or something. but i actually know of a house that was lifted off it's foundation by a wisteria!

The best wisteria I had was in the middle of the yard, all by itself, grown as a small tree/shrub with a central trunk. It grew up and draped gracefully. Every winter, faithfully, I went out and hacked it back to its trunk. That helped keep it a nice small tree/shrub. Of course occasionally had to pull up runners and hack them back, but no problems. It was beautiful!