Grilling corn on the cob.... nekkid.

I have a very fun friend who has extremely funny sayings. My favorite was when their dog was kind of naughty and they said that he "was having a large day." It's a good way to describe it. When Kai is being a toot we say she is having a "large day."

So when my friend was asking me about grilling corn they asked if I just put the corn directly on the grill... just shucked and with nothing else... just nekkid. I thought it was a very very fun way to say it. 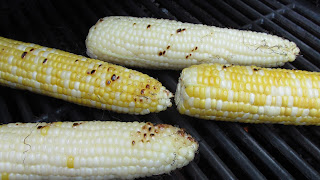 Grilled corn. The perfect way to prepare it.

So several days later I was in town talking to some gals that I only kind of know. We were all standing around watching folks flock to the back of a truck to buy sweet corn. The farmers were selling tons and tons of it and so we were talking about the 'best' way to fix it. There are a million different ways to prepare corn on the cob.

I was thinking about the fun way my friend had described grilling corn and so I said, "Well all's you gotta do is grill that corn nekkid."

Both gals whipped their heads around and looked at me in shock, mouths open. I realized the error of my ways.

"What kind of farm are you running, OFG?" Asked one of the gals.

It was over. You know how sometimes a gaggle of gals will get to laughing and then go directly in scream-laughing? Yep. That was us. Almost to the point of tears. We were hanging off each other. Everyone was looking but we didn't even care.

So to clarify... how to grill corn on the cob: 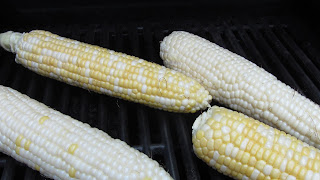 Just put it on the grill. As is. Nothing else.

1. Go and get the freshest corn you can. NOT from the grocery store. Stop at a roadside stand and buy it a dozen for $3.

4. Place the corn directly on the grill.

5. When it starts to get a little color on it, give the cobs a quarter turn. This takes about 3 minutes. Do this until it's nice and done. A little char doesn't hurt anything.

There is no further preparation. You don't need to soak the corn, or grill it in the husk, or whatever. Directly on the (clean) grill. That is it. How easy is that?

My favorite way to eat corn on the cob is in the Mexcian street style. Prepare yourself. This might blow your mind....

Take that freshly grilled corn and butter it. Then take mayo and give it a slather. Next give a little shake of a spicy spice mix (like this one), shake a little Parmesan on it... and most important.... a squeeze of lime.

Did you totally gag?  Don't. This is life changing. You will not be able to believe this taste sensation. 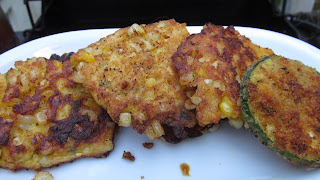 If that is honestly too weird you can always use leftover corn to make fritters.

I know that it sounds weird. Mayo? On corn? Yep. It's a thing. You may never go back to butter and salt and pepper.

I can feel you not believing me. I was once in your shoes and then I saw the light. Just give it a go. What do you have to lose?

Happy Monday everyone! Are you grilling corn... nekkid?

Posted by Ohiofarmgirl at 8:29 AM

We buy a bushel of corn for about $12. Tear off just a few of the outside husks, and then put the ears into gallon ziploc bags and freeze them. When you want some for dinner, just put it into the microwave for a few minutes, flip over, few more. It seriously tastes just like it came out of the field. Can you believe how easy that is? Yum...

And speaking of nekkid grilled corn, have you tried spears of fresh pineapple on the grill? Amazing... (nekkid pineapple that is)

I laughed with your and your friends about the 'nekkid corn'! I love those giggles which turn into mirthful collapses, but sadly I don't often have the opportunity to enjoy such laughter nowadays so I was glad to share yours!