This was a surprise yesterday - the Ohio Dept of Agriculture has banned all poultry events for the rest of this year. Raising birds for the fair, swap meet, or the Ohio National Poultry Show? Good luck, suckers. 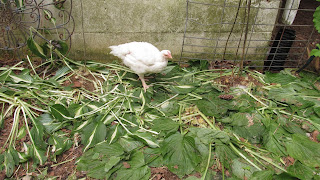 My chicken hooligans have destroyed all my hostas. The government can have this trouble maker.

I've heard from other friends around the country that their state has done the same thing. I don't know about you but wow I think this was a surprise and that it's kind of late in the season for this decision.

What does this mean for you? If you are looking forward to going to any poultry event - fairs, swap meets, auction, etc.... you'll be standing there alone. I knew I should have taken those ganders up to the auction a couple weeks ago. Now I'm stuck with them.

What about private sales, Craiglist ad, and ordering chicks? No word on that.

Ohio is the second biggest commercial egg producer so I think it's wise to protect those flocks - and the industry. But I always get a little twitchy when these things happen. I worry about the backyard chicken keeper and what it means to them. The meat and egg producers have plenty of attorneys to protect their interest - but you and me? I'm really not interested in the state Ag guys sniffing around.

So what can you do? Not much. Be mad. I feel pretty bad for the parents of the 4H kids who already bought the birds and feed....and now they won't be able to recoup (re-coop?) those expenses thru the sale at the fair. I have not heard from anyone who has received any instruction or information from their own local 4H club.

On the other hand..... this sounds like a terrific opportunity for someone like me to drive around in the big truck and scoop up all the meat chickens that folks are now needing to get rid of... so there could be some upside.

The release from the ODA says to up your biosecurity game - for both commercial producers and backyard poultry raisers. Frankly we did this a while ago. We don't let folks on our property for a lot of reasons - including that I have no idea what you are dragging in on your shoes. If you get new birds it would be wise to quarantine them before putting them in with the flock.

They also suggest limiting contact with wild birds... by, you know, keeping your birds inside as much as possible.

I may be pretty country.. and what do I know...but all those commercial producers keep their birds inside and that didn't seem to help them any.

The DOA also suggests that  "...sick birds or unusual bird deaths should also be immediately reported to the Ohio Department of Agriculture’s Division of Animal Health."

Friends, I don't tell other people's stories... but plenty of folks tell me theirs. All I'm saying is there is no way I'd get involved with that kind of oversight. Pretty much our strategy will be to hide the chickens, lock the gate, and man the gun turrets when they start sending in the drones.

Not to be all tin-foil-hat-y but last nite five military style helos flew over our place... low... real low. We ran the chickens under cover and doubled patrols. I might have shook my fist at the copters and yelled, "IF YOU WANT MAY CHICKENS, COME AND GET THEM!"

Pretty sure I'm on some kind of watch list now. Molon labe.

Happy Wednesday everyone. What's the word on your state and how they are handling this?

Posted by Ohiofarmgirl at 8:10 AM

I live thirty or so miles north of Pittsburgh and our fair and farm show did the same thing..

We had a very smart Premier of Alberta when the mad cow disease went through. His advise was to " shoot,shovel and shut up" I agree keep the officials out. Besides, where have they been and what do they have on their shoes?

Just called my Oregon local extension office. My local fair has not banned the poultry events but has decided that there will be no water fowl shown. They requested that people quarantine their poultry for 30 days before and after the fair. But the fair is still 6 weeks away so who knows what will happen.

We don't have it in France, but some years ago we did. The mayor came round and told us to lock up our chickens where the wild birds could not get to the food, nor poop on their ground. So, we locked them up in the little barn. The chickens were very unhappy and overcrowded but we managed. Lots of other people didn't bother. The flu burnt itself out.

Sounds like a decision made by a bureaucrat sitting in a city high-rise who would not know the difference between a gander and a meat chicken. Personally I don't think anything should be done to "protect" the concentrated animal feeding operations (CAFO). If their birds get sick and die its because keeping them inside doesn't keep them healthy (as you mentioned), and they need to change the way THEY do things and leave everyone else do to what they've been happily doing for hundreds of years (showing birds at country fairs). Although I do need to discuss this with our hens, there is one in particular that has been hanging around on the veranda a lot and I think that she would come inside if there wasn't a screen door in her way. She probably thinks we keep the sunflower seeds in there. ALSO reporting dead chickens! That's hilarious.