The Great Meat Migration and more on the bird flu

Yesterday we couldn't take it one more minute. The creepy meats had to get out of the garage. They were ruining everything and completely out of control. We were at our end. So we took action. 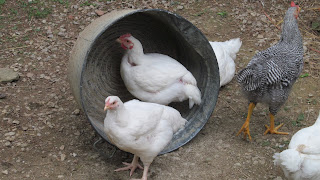 Meats in a tub.

One by one we hauled the meats over to the Turkey House where they can sit there and get fat - instead of trampling my hostas. Honestly this is the most hilarious group of meats we've had. They are very free ranging and have a lot of things to do. But it's a veritable meat stampede everywhere they go. So they were sent to the Turkey House and the Small Yard which has chain link fence that they can't get out of.... we hope. 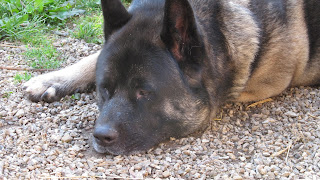 The Dread Commander Zander will be on patrol.... after his nap.

Moving them to the Turkey House is a risk - we've been on an all out Rat Assault for the last couple weeks and I think we've cleaned them out. But the Turkey House is close to the woods and that's where those rat bastards come from. So we'll double patrols and hope for the best. We are thinking the Second Group of Meats will be ready in two weeks.

In other news..... thanks to my friend, "L" who posted this article about how some of the grocery stores are limiting egg purchases due to the bird flu. Some fast food chains are also limiting breakfast hours to cut down on their egg consumption due to higher prices. Our local news reported no one around here has had these problems. We don't buy eggs from the store so I have no idea if prices have actually gone up.

Also there was this release about how the CDC put out an alert for doctors to be on the lookout for bird flu in people. This is, of course, hot on the heels of when our state banned all poultry events. Overreaction? I dunno... I think it means they don't know exactly what is going on. We are still hiding under our tin foil hats.

That's all the chicken news that is fit to print. Happy Friday everyone!

Posted by Ohiofarmgirl at 7:15 AM

hi. we are having a rat invasion. using green tom-cat cubes. how did you get rid of yours?
thanks.
deb h.

if those meat birds are so engaging i suspect they are not quite the meat birds of the past, who were like automatons.

yep Deborah, these must be heavy on "something else" because they are kind of ridiculous. still creepy tho. as for the rats - a combination of our best assassin, our barn cat Shine, the dogs, and also we've put out rat bait. i'm not sure what kind it is. but we lock it in an empty coop for several nights in a row...then do patrols to take up the bodies so no one else gets them. rats are shockingly difficult to control. :-/

here is more on our rat control methods:
http://adventuresinthegoodland.blogspot.com/2012/09/varmint-killing-101-rats.html

We battle rats as well...... inside the house as well! Horrid things. We use poison, but once our old Springer Spaniel is no longer with us we might get a small ratting terrier like a Jack Russell. As for meat birds, we hatched fifteen a couple of weeks ago and quite a few of them are cockerels, so they are going to be our 'meat birds'. It will be nice to eat chicken again....