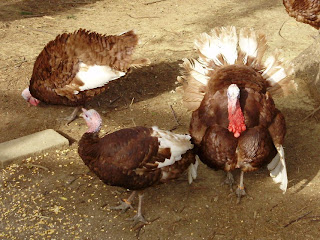 But first, from time to time I get accused of not being sensitive to our vegetarian friends.... to that end, if you are veg or if you are icked out by meat, please look away. This won't be overly graphic but I wouldn't want anyone to barf on their keyboard.  But if you'd like to know how to save money, eat like a king, and learn a "new" skill, read on!  Lets talk turkey!

As you know, we recently "dressed" (the polite way to say butchered) three of our big ol' Bourbon Red tom turkeys. They volunteered with their ruckus behavior - and because they were getting pretty darn big. So we had Turkey Day on Tax Day and  had a great time. It really worked out well once we got the logistics down. First a quick nod to my pal, Buster, for his fabulous tips on his BYC thread about dressing his 50 lbs turkey..thanks, buddy! (NOTE: be warned, his post is graphic)

Our toms were big - not crazy big like Buster's 50 lbs monster, but big. We think all three dressed out to over 20 pounds each (probably closer to 25). The big story in this post is what happened after the turkeys rested in the extra-cold-beer-fridge for a couple days. Aging the meat makes it more tender and delicious.. so we let it set for 3 or 4 days.

Since its a little silly for just the two of us to roast a 25 lbs turkey.. I part turkeys up into manageable pieces and then freeze them for easy and quick dinners later. Even if you don't raise your own turkeys you can part up store bought turks when you find them on sale. Thanks to our local grocery store wars all of our local chains had 17lbs turkeys on sale for $5 last fall...so we loaded up at all the stores and had lots of cheap dinners using this parting up method.

OK here is where we get graphic....so turn away, or cowboy up and keep reading......

Here is the smallest of the three turkeys: 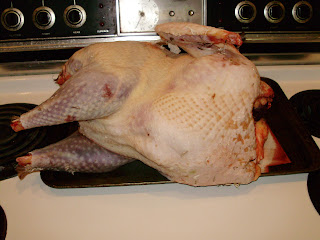 To be sure, we are the worst pluckers EVER and I'm sure that The Farm Master, known as Bourbon Red, is cringing at our shabby work...but really... we had enough chaos going on outside when we dressed these birds, so we did a rough pluck then I finished up when I'm parting them up inside.  Here we go: 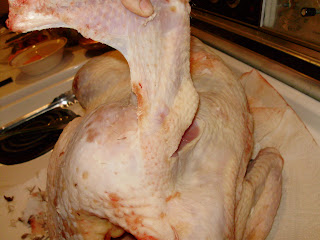 Start by removing the wings. Use your knife to cut around the joint, then thru tendons, then you should be able to twist and pull...and voila. Wing #1. Do the same on the other side. 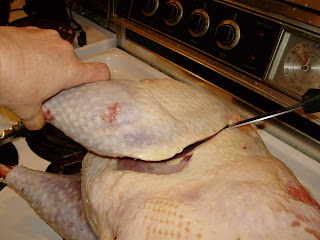 Next, work on the thighs and legs. Use the same method of cutting around the joint, then thru, then twist and pull. Its easiest to cut the thigh off first, then take off the drumstick if you'd like them separate. 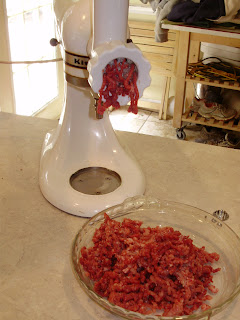 I put some of the thighs and drumstick in the crock pot to cook very slowly and the rest were put thru the Kitchenaide mixer/grinder attachment for ground meat. See how red and rich the meat is? 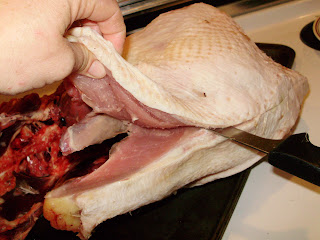 Now remove the breast -- see that I'm using a boning knife. Just following along the keel (breast bone) and get as much of the white meat as you can. 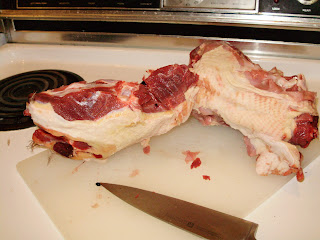 The last step is to cut the back from the breast section of the carcass. This can be tricky but there is a logical "break" between the two parts. CAREFULLY cut between the backbones..or if you have a big ol' clever then just give it a good whack.Or if you are super strong just break it. (Be careful!) 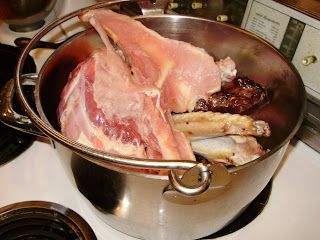 Put the neck, wings, and the rest of the bones in a big stock pot, cover with cold water and simmer for the richest, most luxurious stock ever. I let mine simmer over night HOWEVER I have the most reliable stove ever so I can do this with confidence. Please don't burn your house down or boil your pot dry.

When the stock is done I pick thru the leavin's, toss the bones, pick out the best pieces for us, then mound up whatever's left for the house cats. I don't give this to the dogs as the bones are too brittle... but cats will pick around the bones just fine. Our Teddi Grumpkins loves the neck pieces the best - she is going to eat like a queen for days! 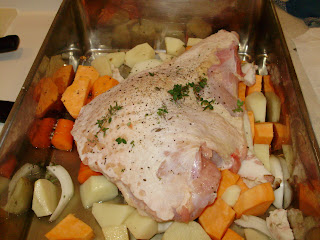 The breasts will be frozen for easy dinners later. I really like Sunset magazine's method of cooking turkey parts in a 400* oven for about an hour over a bed of root vegetables. Of course I top with a little bacon for full farm effect.

I was supposed to take a picture of the completed dish, but honestly we attacked it like a pack of wolves. So the next night I made the same thing... and still didn't get the "after" shot... so..um.. here's what was left: 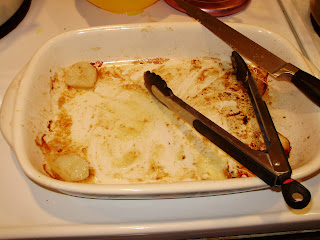 That wasn't too icky was it? Really - this is a great way to get a lot of meals out of a typical holiday-only bird. Why wait for the holidays? Turkey is great on the grill and is a super quick, hands free supper.

There was a ruckus in the turkey yard earlier... it was the younger jakes ...I believe they are "volunteering" to come to dinner..and as good as our turkey dinner were, I believe we'll be dressing and parting up some more turkeys very very soon.

Happy Turkey everyone!
Posted by Ohiofarmgirl at 8:17 AM

Ah! I'm so excited to grow my own birds now! We've already made the switch to ground turkey for everything, so now I just need to raise it myself! Yummy!

Hi Alaena! You will love raising turkeys - really, we kinda love them more than our chickens. And they are super easy to have in the yard. I see you're getting duck? YAY! The only problem we ever had was putting the turkeys in the yard NEXT to the ducks..they were too wet for the poults. I'm popping over to your site to see whats going on over there..Is your dog a hard workin' farm dog? Do you have problems with predators???

My dog works hard at holding the floor down, and that's about it. Our turkeys and ducks will be kept seperate... er... when we get the other run built. As far as predators... yes! We lost our entire flock of chickens (we didn't have many) to a great horned owl last year... so this year is starting over for us. Booo!

Now why didn't I ever think of marinating my turks in beer???!? I don't know why I didn't, considering that, when we go camping, I always do the chicken-with-the-beer-can-up-its-butt roast over the ol' campfire. (yum!)

Haha! I love the "after" picture of your meal! But that seriously does sound yummy - I'm going to have to try that. You did a great job describing how to cut up the turkey. I've always just roasted the whole thing, but I'm going to cut up the next one - much nicer variety of meals that way! Thanks!

Thanks B2B! Its a great way NOT to waste a turkey. And its super fast. You can do the traditional stuffing by putting the dressing in the baking dish, then putting just the breast on top. It totally works!

We use the dark meat in turkey salad and in turkey pot pie/noodles. Easy easy easy.
:-)

Absolutly loving your blog. Contacted a few people about goats, will be building our greenhouse and goat shed in the next couple of weeks. We tried Broad Breasted Bronze turkeys last year and they just didn't grow. Have a few Bourbon Reds that we are going to try to breed. I built a Whizbang plucker and it works great on turkeys as well as chickens and ducks. Definately easier than hand plucking, especially when you are raising 50+ creepy meats.

You built a plucker!?!? ohmigolly - ok you are my new hero! We'd love to have one. And you said it - hand plucking is totally for the birds, especially since we are The Worlds Worst Pluckers EVER. Great work!

And excellent news about goats and the greenhouse! Feel free to ask any questions - either thru comments or email. I love hearing about how other folks are doing.
:-)