The Politics of Gobbling - Part One 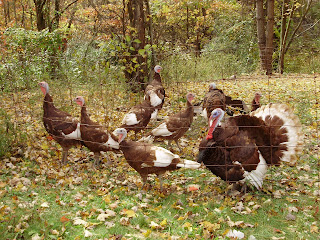 We have a heritage breed of turkeys called Bourbon Reds. They are more like the wild turkeys and what you see in paintings of the first Thanksgiving than anything else. They have beautiful dark red-brown plumage and are impressive with their fully displayed tails and proud strut. And most of the time we like the gobbling.

But our Bourbon Reds are not the kind you buy at the store. Commercially grown turkeys are usually Broad Breasted Whites - they are the Frankenstein of the turkey world. Like the commercial broilers (the dinner chicks), they grow fast, have over-sized breasts, and are so far from being a "real" turkey they don't even reproduce naturally. 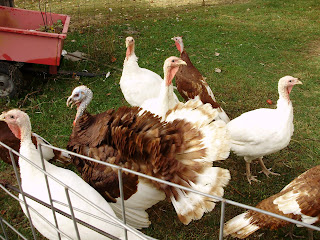 We tried a couple BBW's a few years ago and have to say we really love the Bourbon Reds much better. They are super cold hearty, love to forage and free range more than eating bagged food, are great mothers, and they are funny. Funny to watch, funny to hear (they make a wide range of noises and calls), and its fun to watch the politics of gobbling. Until it gets out of hand, that is. 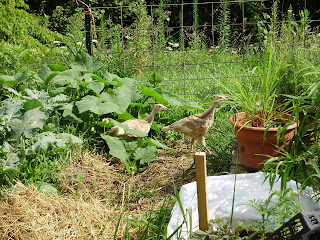 Funny little poults being dinosaur-like in the garden last summer
For the last couple months there's been a big hubbub out in the turkey yard. A sure sign that spring is in the air is the sound of gobblin'....loud gobbling. Extremely loud, constant gobbling. Followed by the shrill shrieking of a turkey hen trying to fight her way out of a mob of just male turkeys. 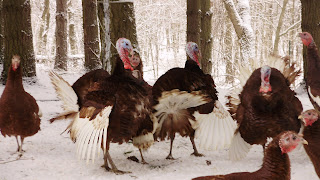 The turkey trouble starts....
Generally, whenever you have a bunch of males in the barnyard together you can expect fighting. Mostly they are figuring out who is the top dog, and mostly there's just pushing and shoving. But there comes a time when the scale is tipped and the pushing and shoving turns into sometimes deadly combat... as we saw with Fred The Rooster (may he rest in peace). So came the day several weeks ago with the turkeys.

Even worse, one day The Three staged a coup and tried to over throw TurkZilla, our original tom and appointed herd sire. TZ has always been our Number One. His job is to watch over the flock, defend the borders, and um.. that is.. er... do his "manly business" with the hens to ensure a new round of turkey babies (called poults) will be on the way.

Apparently The Gang of Three had enough of his rule and one morning we found TZ badly beaten up and cowering in one of the nest boxes.  We carefully watched The Three and found they were working as a team to attack the other males..and the turkey hens. Since we were also entering the season where the hens would start laying and setting their nests....and toms can turn aggressive on setting hens - and even kill them...well, we couldn't have any of that. 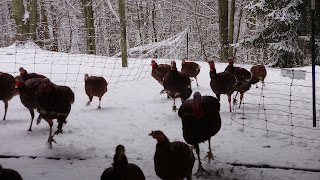 The herd of turks happy to be outside - rain, shine, or snow.
Their attacks together with the treasonous act of trying to over throw TZ quickly resulted in the execution order. We had enough of their shenanigans and it was time to turn our thoughts to turkey... roast turkey, turkey sandwiches, turkey salad, turkey BBQ, and turkey pot pie.

We prepared for Turkey Dressing Day or "T Day"...which happened to fall on tax day (April 15). So while other folks were doing paperwork, we were plucking. No last minute rushing to the post office box.. it was "to the block" with those mean toms.

Odd. That day as we worked, fully in sight of the whole barnyard, there was nary a peep from anyone.... hum....

Anyway, don't cringe. We wont detail the actual "deed" - unless there is interest and we can cover that separately. Of course I always point folks to Harvey Ussery's wonderful site, The Modern Homestead, for the "how to's" of poultry butchering. Pound for pound we find the turkeys are just as much work (or should I say, just as little work?) as chickens... but yield far more meals. There is just as much prep work, just as much plucking (or skinning), and just as much clean up...but instead of getting one or two meals of meat and several quarts of stock.... we get at least 5 meals worth of meat, and lots of stock. And we get the added bonus of lots of 'leavin'' for the house cats.

The first turkey dinner we had was amazing.  The meat was more "turkey-like" than we'd ever had before. It was rich and firm and delicious. Right now I'm canning the stock that simmer for 24 hours...its velvety and heavenly..and making the house smell wonderful.

However, we've noticed that out in the turkey yard the next round of jakes (a clutch hatched late in the summer) are out there pushing and shoving around...hum... say, I hope they don't make a move on TZ. But on the other hand, we could use a good turkey fry around here.

Love this post. Who knew being a turkey was such a tough gig? I'm looking into getting some Bourbons, as well as some Palms. I'm envious of your flock! :)
Thanks for the link to the Modern Homestead site, I'm totally checking that out!

Hey Alaena! Thanks! We built up our flock really fast - one tom (TZ) and 3 hens....and we ended up with 17 turks the fall after they first started laying! We would have had more except for 3 failed clutches.

But this year we'll be off the charts. The BR's are really fabulous - you can't go wrong. Be sure to check out S & S Poultry (http://sandspoultry.com) for quality birds from a smaller grower.

I've bookmarked S&S Poultry, thanks for the tip! I've also been cruising Ebay, Eggbid and BYC for eggs. I really like the idea of supporting small farms or one family operations over the big places!

Those turkeys look great. What do turkeys eat - bugs? Do you have to feed them other stuff? Do they get along with the chickens?

I have noticed that all the fowl groups are led by a "fowl" male; OD, TurkZilla, and Big Pansey (apparently duck are led by non-descript weaklings). Which of the fowl is the fowlest (barnyard king)?

I would definately had said that Fred the Rooster was the king.. but now that he rests in peace... I think probably TZ is the king. Actually I think there is a power vacuum now and we surely need a leader.

As for the ducks, they were led by a majestic drake, Mr. Duck. Who fell over dead one day. Honestly it was a bad day here and I still miss him.

I'll work on a 'how to turkey' for ya - easy easy easy. They eat everything (bugs, grass, leaves - they are omnivorous) and keep busy all day. They'd be great for your climate as the cold doesn't bother them at all. We probably like the turkeys best of all.

The female ducks need to conspire to get a male that is worth blogging about.

Try a comment test when you get a chance. I changed it to require monitor concurrence, but not sure if that will have any impact.