Either I am a goose or these Bourbon Red Turkey Hens are like convection ovens and get the job done faster. I went out to let Turkey Momma, one of our best turkey hens, up from her nest and I saw an egg shell out of the nest! An EMPTY egg shell - it wasn't a bad egg that she kicked out.

So I gingerly lifted up her wing and saw...... turkey butts.  A big ol' tumble of little fluffy turkey babies, called poults. They are just the dickens.

I have to revise my earlier statement.... the only thing cuter than baby ducks are.. baby turkeys. 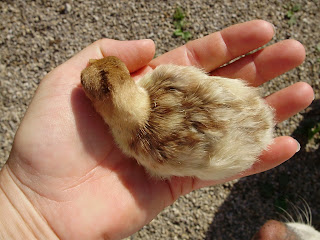 Fresh turkey.. right form the shell. And yes Dog 1 wants to sniff the new arrival
Seriously.. look at this little lumpkins.... he looks like a trickster for sure. You can tell because he's already giving me the stink eye. 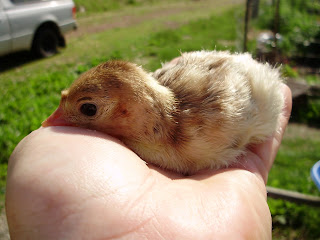 Since they were early we now have a storage problem.. um.. we need a safe coop for her and we were supposed to have "thinned the ranks" by the time they were due (later this week). She is in a safe brooder box but there isn't enough room for the babies to run around.. and we can't let the poults be in with the adults (who might kill them). So we need some clever ideas for where to put these jakes until they come to dinner. Talk about out with the old and in with the new!

Oh geez... I had better go and check on our second setting turkey hen! She might be early too!

Baby turkeys are cute. Not so cute when they get older though. lol

I've never seen a baby turkey, but it is sorta (underlined) cute. We have wild turkeys that we see on our property, if the dogs are locked up. Congrats grandma!

I've never seen a baby turkey and it is sorta (underlined) cute. We have wild turkeys that run thru our property, when the dogs are locked up. Congrats Grandma!

Oh they are just adorable until one day.. they get to the brutally ugly, vulture like phase... then they just get pretty when they are all feathered out and lovely.

So far she still has a lot of eggs under her.. hopefully there will be more tomorrow. I just love the little peeping poults!

"You know you have to get out more often when ..... you immediately recognize turkey poult butts from other poultry butts!"

Our chickens arrive next week, so if we don't kill them all through incompetence then we want to add a couple of turkeys next year - assuming the wild ones hanging around here don't move in first.

Chai Chai, I can name that poultry butt in 2 seconds! and yes I need to get out more often!

A couple more hatched yesterday but wild horses couldn't get that gal off the rest of the eggs. Hope there are more today
:-)

Cute, cute, CUTE!! And that one in your hand has an eyebrow! Just adorable.

There's more, more, more! She kicked more empty eggshells out today... she is so funny. TurkeyMomma sits there with a very determined look and she won't get up for anything. She's on the job!