Brother, Can You Spare A Pullet?

“Brother, can you spare a pullet?”  Or “Chickens are the new wealth” 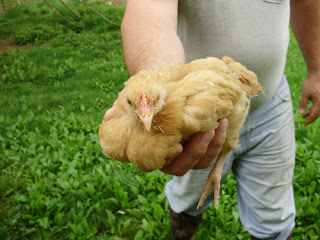 Hey buddy - got any spare chicks?
Someone I know likes to (smugly) tell me how poor we are because we “have” to grow our own food. Most times I just laugh off these kinds of comments – generally because most of the time we feel pretty “rich.”  Nah, we don't have luxury cars or big vacations.. but we don't have any debt, we buy most things cash, and we are confident we can keep fending for ourselves, such as it is.

But some days I can't figure out why someone would throw that stick at me – that we are so poor we “have” to grow our own food and how awful it was that we “had” to eat a turkey from our yard.

Maybe we're too caught up in what we're doing, or not watching enough cable TV...but I don't feel poor at all.

Even when I made big money at my corporate job I never felt “rich” - mostly I just felt used. I had to work at lot to make all that money to buy all that stuff. I ended up feeling tired, drained, and hoping to just get thru the work week so I could go and spend some of that money to make myself feel better for having to work so much.

The shame of it is, we eat better than most folks and that turkey was delicious. Yesterday we made a huge pot of turkey-n-noodles and drove that carb-loaded bus home with dressing on the side made from our own bread.  Then we had apple pie. I didn't feel poor at all and I felt much better than if I had eaten a Lean Cuisine at my desk.  I'm still in a food coma if you want the truth.  And the entire meal – which turned out to be more like 3 meals – cost us less than if we had bought just one of those frozen dinners, even if it was on sale!

It got me to thinking about why we are doing this and how lucky I feel.

Some kids asked me once if I was farming because I was an environmentalist? “Nope,” I told them, “I just want to do it.”

“But isn't it a lot of work? Wouldn't you rather watch TV or something?”

“Yep its a lot of work and nope I wouldn't rather be watching TV..altho I do enjoy Dancing With The Stars.”

Most of these kinds of inquires go like this – followed by a lot of head scratchin' and them wandering away wondering what was the matter with me.

But then you have things in the news like a 1000 point drop in the Dow.

Whether it was angry Greeks in the streets, a fat fingered trader causing a cascade failure, or even aliens that are causing mayhem...those kind of events get even the most skeptical to start circling around wondering if I had any advice for starting a garden? On those bad news days all of a sudden I don't look like that much of a crackpot.

I'm generally not a end-of-the-world-er, but every once in a while, like a teenager wanting to scare myself by watching a horror flick, I like to tune into Aaron Task and Henry Blogget on Tech Ticker just to see how the house of cards is going to come crashing down this week.

Mostly I just like to watch 'em hop around and scream about how bad things are. To be sure the economy is in the toilet, everywhere you look there is a new political crisis, a new natural disaster or heaven help us, a new episode of “Glee” signaling Armageddon.  And certainly we haven't seen hard times like this in a while so I'm not scoffing too badly.

But I can afford to laugh a little.  You see, I'm not worried at all. I tapped into the new wealth – chickens. Yep. You heard it here first, chickens are the new wealth.

Soon, according to the pundits preaching on how its all circling the drain, your money won't be worth the paper its printed on..so I'm believin' that the new currency is gonna be a sack of chickens.

Owe money on your mortgage? Well you'll need a dressed turkey and a couple pounds of bacon to make the payment. Want a sandwich? You'll have to pay 3 pounds of dollar bills to buy a 2 pound loaf of bread... or just bring some carrots.

All those haters who think not only that we crazy, but that we are dirt poor.. well, they'll be mighty glad we don't have hard feelings when they show up wanting supper. That is for sure.

Poor? Nope all those hens are like money in the bank if you ask me.

Now if you'll excuse me I'm heading out to check on my latest investments. Miss Duck should be hatching here soon and Miss Dash has got some dinner chickens under her. We've got a while before the turkey hens come due, and unlike interest rates, I can be sure I'll get something from those hard working investments. And I'm not putting all my pullets under one broody either.

Happy Farming everyone, we're all in this together.
Posted by Ohiofarmgirl at 4:34 PM

Excellent, we will be getting some currency early next month when our 8 Wyandotte's arrive.

If Chickens are the new dollar, will our Guinea Hens be the equivalent of the Peso?

I must be a millionare. (or chickenare) I've got 36 chickens. Wow! I do feel rich.

Love, love, love it! Yes...we farmers, we're the strange ones for wanting...wait a minute, I mean caring about what we put in our bodies. You tell it like it is my friend!

I think the guineas are more like the Canadian Dollar.. their value has gone up exponentially. We know someone nearby who's dogs are totally covered in ticks.. we've still only seen a few here. But they did scream at the rain all day!

Load up on the new wealth everyone! Whoot!

You read my mind! I have a blog post rolling around in my head just like this one. Every time I add another critter to the farm, or the subject of our "habit" comes up, my friends act like it's the biggest joke on me. Well... for all the reasons you stated, and a few of my own, the "yoke" will be on them! :D

Girl you just read my mind! The Paintiff and I have had many a discussion that went just like that. I just love it when folks say to me...you know you can buy ketchup and jam in the store right? LOL! I live this life because I love it and for no other reason, although it will come in handy when everything does fall apart! ;)

We feel pretty rich here too with all these cluckers.

Give Nibbles a kiss from me! ;o)

Wow! I guess we are all thinkin' the same thing.. or maybe all the haters just have their mean pants on right now.. well, whatever is stirring the pot.. at least we all have a chicken to put in it!

Sally: Nibbles says she loves her favorite auntie.. but I'm not kissing her because she's been standing in the poison ivy all morning eating it.
;-)

"The rich would have to eat money if the poor did not provide food.”

I loved this "rant"! Many people just do not get it. Do not understand how living on a farm is the most satifying life ever. Everyday I wake up at the farm I every part of my being is contented and happy. Sounds like you are also!

Thanks Mr. H and WCG!

And yep, really I never want to travel anymore (I used to live at the airport) because every day feels like a holiday or a vacation to me.

And I'd love to give all the haters a plate of the ham-n-beans I just had. Yes, for breakfast.. the ham was buttery and delicious... that might just turn 'em to farming. But if not, well I guess I'll just keep on keepin' on.

You sound mighty "rich" to me! Like my mother says...most people don't know what they're actually eating anymore. Particularly true here in Los Angeles...Kudos to you and your chicks. :)