I need to get caught up on my farm notes as the likelyhood that I'll remember any of this is well... zero.

But first... need to get a head start on your planting but you may still have frost (northern friends....)??... here is a cheap and easy way to get started. I call it the hillbilly green house: 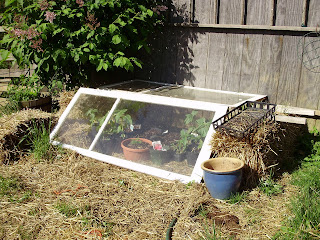 Cost of goods: $0 + materials on hand
Take two bales of straw, put them up against a structure (or more straw bales) facing the morning sun (south, south east), grab whatever windows, storm doors, or what have you (as long as they are plastic or glass) and set them up to capture as much sun as possible. Easy-peasy. Done. Just don't forget to "open" the greenhouse by moving the glass on warmer days so you don't cook your seedlings.

Beez!
We got a swarm of beez from the old farm! The Big Man went over on Wednesday and came home with a box of angry bees in the back of this truck. We got them set up and they are a-buzzin'!  Normally a hive of bees costs about $100... but we got "local" bees for free! He already had a hive built, and he installed them near the upper garden. What a find! They had broken off from the swarm that had been at the old farm for years.

4:35am
More shenanigans from the bad neighbors. They started playing their radio - it was outside on their deck by the pond - on Friday the 14th. And kept it on. And on. So I neighborly put a note in their box on the 19th asking them to turn it down/off.  They didn't.

The thing about farming is that 4:35 in the AM is a fine time to be awake and standing on your front porch calling the sheriff and telling him those sons-a-golly-what's have still got that damn thing on. That was the 20th. Its been quiet now.

Of course the guineas where out there screaming like they were being murdered that night so we had to run out there and shut them up! Yikes! However, I'd laugh my tuckus off if the sheriff showed up and told us to turn our guineas down. Then I'd give him some pie and we'd all have a good laugh.

Farm Notes: (A reminder this is the boring part ... its part of my journal keeping....)
* Planted dahlias and some squash in the front garden..waiting on more compost/soil
* I got a lot of the hillside garden planted - mostly seeds:
- peas on the perimeter
- north side close to roses: BOSS, 3 sisters, red corn, and empty row, straw walkway
- south side starting from roses: Dahlia, Italian green beans, underplanted with radishes; Sweet 100 tomato,  carrot/cabbage, eggplants under covers, Dahlia, carrots
GATE
- north side closest to hen house: blue corn, half runner beans, empty row, walkway (board)
- west side: sunflowers, white pattypan squash
- south side: 1 row of hot peppers, 2 rows of zucchini, 2 empty rows, walkway; radishes, peas, carrots (from above)
* I'm not sure I' had complete success with the buckwheat as a green manure experiment. It had not flowered but I had to chop it up with the hoe to make sure it will be composted down for planting after the 8th of June (gives it time to mulch into the soil). However the winter wheat grew like gangbusters. I cut it down before the seed heads fully matured and gave it to the goats and hens as fresh hay. They loved it.
* Its been ridiculously wet -- too much to do anything at all with the square garden which is basically still a puddle. At this point I'm almost going to let the ducks swim in it, for heavens sakes.
* Cindy Lou the goose might actually be setting....

And did I mention I'm making cheese today? Feta to be exact... let the brine begin!

I get the feeling the bad neighbors don't know who they are messing with. If the police don't work there is still always the water buffalo (or the pig sheep).

The sunflowers you planted, are they the giant kind?

Yep the sunflowers are mostly BOSS (Black Oil Sunflower Seeds) - the kind you can give to livestock (goats love them) and also the Russian Greystripe - the huge ones.. and then I get all kinds of ornamental ones. I'd love to have a field of them.. the first year the bunnies ate the heads off 999 of the 1000 or so sunflowers I planted... so we are working on that. ahem.

(to the barncat: Hey Shine! Get out there and hunt down those bunnies!)
:)

Ohiofarmgirl, You did right to get your greens going I'm eating mine as fast as I can pickum! I was supposed to pick the collards yesterday, but the rain promises more growth..so a few more days won't hurt to leave then grow bigger..then I'll punce on them..I like that Hillbilly greenhouse..I'm looking to do the same thing.
Hope I'm not too late for some free windows on Craigslist...:o)

I cant wait for the greens, Ginny! Lots of folks are happy to get ride of their own windows. I'm sure you'll find some
:-)