One of my new pals was asking me about Freedom (sometimes called Colored) Rangers and Cornish X's which reminded me that I need to give an update on our dinner chickens.

Well. Here they are: 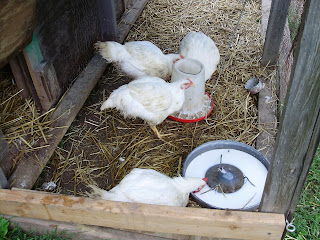 See that they have milk and feed. I tried mixing the feed with the milk but that was too complicated for them and they wouldn't eat it. But they love the fresh goat milk. The Farm Master, known as Bourbon Red, said he grows his dinner chickens out longer, to a larger weight, by feeding milk + hog ration (usually 14%). We are splitting the difference and giving a slightly lower chick ration ("thinned" out a bit with corn to reduce the protein percentage) and milk.

I know that folks swear by them but I have to say...we think they are weird. And stinky. I'm really hoping they are going to be a breeze to dress and taste like chicken heaven. Unless they do we probably won't get them again. They are a bit too creepy for me and right now we aren't seeing a huge benefit from growing out this breed.

Last summer we got Red Broilers from Ideal and we loved them. Well, I loved all of them but one of the roosters. His name was First. And he was.

Red Broilers are along the lines of the Colored/Freedom Rangers... a more "natural" but fast growing meat chicken that can be finished to a six pound broiler in seven weeks (so they advertise). We grew ours out more slowly and wow! When they were done they were really.. meaty. They did not have the huge breast that Cornish X's have - which was my only surprise. But we were wow'd by the overall taste and were finally sold on thigh meat (never a fan of purchased chicken thighs).

Freedom Rangers, different from Red Broilers, are from JM Hatchery are are advertised to be dressed at 9 or 11 weeks. Like the Red Broilers they are supposed to be more of a 'natural' chicken - one that likes to be out and about doing chicken things and not sleeping with its face in the feed trough.

One of the drawbacks of the Cornish X's is that they grow so fast, if you don't regulate their feed they will flop over dead before they are ready to dress. Out of the original 10 we've lost two so far - one recently and only a few weeks old.

Unlike the current creepy meats, we didn't have any losses with the Red Broilers. Only one of 15 had the weird leg thing. But he (we named him 'Legs' and yes we know that is mean) was too creepy to eat so he's still out there along with 2 of the hens - both of whom laid. No word on if they eggs will hatch. By my count we could be past due so the eggs may not be fertile. I may have counted wrong tho, so we'll see.

We are coming up on our dinner date with our meat chickens...and I can't wait. First I need their brooder space and also.. who doesn't love fried chicken?

Anyone else have experience with Freedom Rangers? Thoughts on creepy meat chickens?
Posted by Ohiofarmgirl at 10:04 PM

LOL about creepy meat chickens. We raise 25 of them every year and we've never had problems. We feed them once a day in the morning and when their feed is gone, they don't get anymore till next morning. We also keep the broiler booster vitamin in their water. We think they are delicious. When we dress chickens we just skin them because I'm on WW and for the rest of the fam, I just double coat them in breading and they don't miss the skin. We like them and will continue to raise them but I know that alot of folks don't! :)

Thanks Goodwife! I think we just have to try harder. There are some folks who really have the feeding down to a science but we tend to wax "raise as naturally as possible"...and I've struggled with this for these "un-natural" birds. They have access to range but mostly they just lay there being icky. Maybe if they were properly motivated..... thanks for the tip about feeding once a day!

We did the creepy meat chicken last year. We called them "Frankenchickens". They were dumber than a box of rocks and smelled worse than... a bad smelling thing.

We had a lot just keel over too, and because of all of the above, we decided to go with a dual purpose breed this year. I think instead of processing all at once, we may go for the old-fashioned, "go to the coop and pick out dinner" kinda thing. My husband may over rule that here in the near future tho... he keeps talking about getting the Frankenchickens again. Ugh.

hey Alaena! let us know how it goes (and i'll be clicking over to your blog too!). I'd love to hear about the 'whys' on whichever way you go. Really, folks just love the meaties and I'm hearing more folks talk about alternative strategies for feeding.

One of the things I've been thinking about is the other benefits of a more "natural" chicken - the bug chasing, manure etc... So I'm thinking about those things as well.

Either way we'll have our findings late next week when we have our butcher day.

You are totally cracking me up with the "creepy chickens" thing. I've never really considered raising meat birds. We sent 18 extra roos to freezer camp last year - and they were so scrawny it was hardly worth the effort. I may try to talk B into some meat chickens. But I'm gonna wait until you post your lastest findings on which ones are the best. Because that's just the way I roll. :)

We decided that later this week, weather permitting, we'll be having our freezer camp. I'll have findings soon!