The best trap for a rat is a cat

The other day I went outside at nite as stopped dead in my tracks. There. Was. A. Rat! A BIG one. Oh golly.

So we started a rat-eradication program. Nothing worked and we were out foxed by that stupid rat at every turn. We tried everything and finally resorted to one of those icky poisonous traps that sends me into fits. Even tho we regularly patrolled we didn't find one body. I just worried a lot that one of our critters would find and eat one of those poisoned rats. But nada. Not even one. 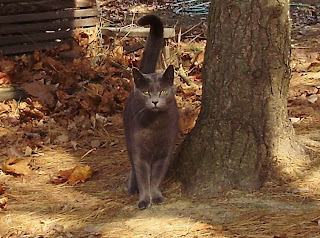 In the meantime, our boy Shine - King of All Barncats - kept up with his patrols and regularily brought us field mice and voles. So I figured he just had a big mouse when I happened to look out the window and noticed him coming in from the hunt. But then I noticed it was darn big....Shine was hauling it up the hillside between his front legs like a lion carrying a gazelle. And then I noticed it had a long tail!

Suffice it to say there was a certain amount of screaming and shrieking and hopping about (that was me). The Big Man ran out there...well, technically, he lumbered out there. But he found and took the rat from Shine who was pretty mad about it. 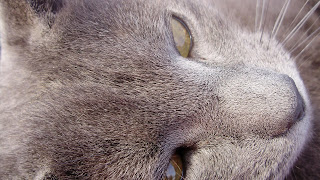 After all the failed attempts, our Shine proved that the best trap for a rat is indeed a cat. Thanks Shine!
Posted by Ohiofarmgirl at 6:49 AM

Shine is very brave cat. Those rats can be very big. Bravo Shine!

Yeah!!! Thanks for the confirmation! Templeton has done massive damage and as winter sets in he finds himself hungrier and hungrier, eating through the plastic bottles of Iodine, apple scent and MOLASSES! Dang that rat(s). I've got 3 kittens on hold for me and I think that this is the time to KILL them off. Of course these little kitties have to become bigger but they'll quickly be worth their keep.

hi Vrt! Yep, we think Shine is the best!

Diane - besides a couple of hard working farm dogs, a colony of barncats is one of the most important tools for your farm.

If anyone is in the market for barncats just check with your local, rural vet. Chances are they have a big bucket of barncats with your name on it.

Yup! When we moved here our cat Willow lived in the garage because the barn was rust and baling wire held together with spit and old poop. Flash forward a few years and I had a nice barn that was full of mice. We bought a new car, The Paintiff kicked the cat outta the garage and I relocated her to the barn and presto chango no more mice, voles, moles and I've yet to see a rat. Egg sucking snakes however are out of her realm.

The best rat killer we ever had was a Boxer dog named Tori. At our first place she and The Paintiff killed 13 rats in one go! If you said "Hey Tori wanna get a rat!!" You'd better mean it cuz she was excited! Boy I miss that dog......LOL!

We still need something to catch those darn wild boars! (I know you are thinking of bacon,now OFG!)

Incidentally I also just wrote about Rat - of a different kind though...:)

hi GW! Barn cats are amazing, arent they? We had ours in the hen house at the old farm and nary a problem. We keep our feed in the garage so our boy Shine sits on top of the feed bags just waiting for ne'erdowellers.

Grandpa if all our varmints tasted like bacon I'd think I was in heaven, for sure.

Much like Dorothy (the Posse)in the Wizard of Oz (the Posse)you knew the answer to your problem all along (the Posse), and you didn't need to look (the Posse) any further than your own back yard (or at your feet, or on your bed (the Posse)).

Leave it to the lone outdoor cat to put the indoor cats to shame, the least they could have done was sing his praises.

hi CC! Actually Nicholas is quite the mousers...much to my horror he's come saucing out with a body in his mouth. Peeper was horrified and I stood there and shrieked.

WZ - Nah....barncats don't need no stinkin' barns. I love the primal ways of cats. Give your Zeus a high-five from me
;-)

Yay Shine! Barncats are the best!

hi WCG! Barncats ARE the best - sometimes folks try to get them to leave but they just dont know what they are missing.