On taking the puppy out

My pal, FC, just got a little ankle biter pup for the family. She isn't thrilled with the whole dog thing.. but I know he's growing on her. For the last couple days we've been sharing the morning 'pup-pee' report and several of us have been sharing house breaking tips. So, lemme tell you how it works around here. 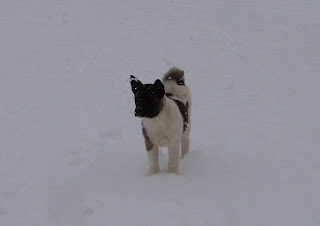 "You mean I have to go back inside? Really?
As a reminder, we got Kai when she was very young. Probably too young for a 'regular' family but since we were experienced and we are home all day it worked out for us. The first thing we worked on, besides her name, was that all dogs pee outside. I think its easier if you already have dogs to train a new pup.

When Lucky came to us at almost a year old, the family said he wasn't house broken. He peed in our house exactly once. Dogs are normally pretty clean - or rather - they don't usually like to toilet in their sleeping area. So when Lucky went on the floor - the other dogs and all the cats made fun of him. Apparently he was told that only..er.. um... that is.. "cats".. ahem... pee in the house. And that was the only incident we ever had. Ti was a cinch to train so we used the same methods with Kai.

My very scientific method to determine when Kai has to go is.... if I have to go.. she probably does too. So when she was littler I just drank a lot of water and we went out a lot. For about the first two weeks I made sure I got awake at night to take her out. She was so young there really wasn't any way she'd last the whole nite. We were a sight, the two of us stumbling around out there - both half asleep. But then we went to a schedule where The Big Man stayed awake until midnight and took her out, and I'd get up about 6am or earlier. And now she's good the whole night.

Plus we usually take her out about an hour after she eats. She's an old pro now and the only accidents we've had was the other morning when the big dogs were howling and she got over excited.

Notice we don't crate train. For lots of reasons we don't use a crate for any of our dogs. We have a designated "dog area" in our kitchen. Its tiled and has scrubbable paint so I can just hose the whole thing out when it gets over-doggy. Its big enough (it used to be the dining area of the kitchen) so that all dogs have a full sized dog bed, I can store their food out there in a big garbage can, has direct access to the door, and they have plenty of room to goof around. Its also easily gated and we installed a swing gate (the baby kind) to keep them from roaming around the house.

I'm not a fan of letting dogs roam around the house at all. And forget about letting them sleep with us. All that paw licking, collar jingling, ear flapping, big dog sighing... and big dog farts.. no thank you. Having the entire Insane Cat Posse sleeping with us is enough of a circus. Throw in a couple hundred pounds of dogs... I'd end up bunking with the chickens for sure.

So in addition to making it less likely that they'd mess in their "dog area," keeping some semblance of order in the house (Nicholas! Get down off that ceiling fan!), instilling in the dogs that they should hold a proximity to me (my "command center" is in the kitchen and where I spend most of my time), it also reminds the dogs that we are the Boss Dogs and they do what we tell them. Now if you have just a family dog, then thats fine. But remember that ours are hard workin' farm dogs and its necessary for us to maintain discipline and a chain of command. Because you know, "I can't afford to make exceptions. Once word leaks out that a 'Boss Dog' has gone soft, people begin to disobey you, and then it's nothing but work, work, work, all the time." (Chai Chai - that ones for you. Any one else?)

So we have little Kai on a schedule, we have the dog area set up, and the next part of house training is... make it fun.

The biggest mistake I see people make is that they make the whole house breaking combative. Remember your puppy is a baby and she's gonna make mistakes. We never punish for housebreaking mistakes and in fact, I feel the responsibility is on me, not her. I'm the grown up - I should be vigilant, I should look for pacing or pawing or snuffing around behaviors... and frankly, she might not have control over her little body yet. When she was really little she'd 'go' a couple times on a single trip outside. So I'd have to make sure she was really "empty." And not distracted which took some patience.  So I'm the one that should cover all the bases.

The next part of making it fun is to cheer her on. Talk in an animated voice, clap your hands, give her lots of "Good dog! That's the way!" Get down to her level and hold your arms wide when she runs to you and give snuggles. I have to say at 6am in a 4* wind chill... this can be hard but sometimes you just have to do what you have to do. Its all worth it to have a well house trained dog.

One of the problems I see with housebreaking the family dog is the parents try and make the kids take the pup out. Sometimes it goes like this:

Parent1: Hey! Someone has to take that dog out!
Parent2: Not me! Make one of them kids do it.
Parent1: Hey one of you kids! Get out there and take that dog out.
Kid1: *no answer because Kid1 is a teen-anger*
Kid2: Not me!
Parent2: I SAID GET OUT THERE AND I MEAN NOW!
Kid2: Man! OK stupid puppy let go *stomps out dragging pup*

I gotta tell you.. if I were that pup I wouldn't want to go out either.  So I'd pee on the floor and try and blame one of the cats. This never works and you can see how the hostility had already risen before the pup even got outside. Kids don't have the maturity to provide positive feedback if they are forced to take the pup out. Remember that dogs can read your body language so you really need to "sell" the "good dog! great job!" to encourage them...even if the windchill is 4*.

Some folks train their dog to use a bell on the door or whatever to say when it has to go out. You can imagine we don't do that around here. Again, we are the bosses of the dogs and they don't ask for anything. If they want out they can go and sit quietly by the door and wait for me. Sometimes when little Kai wants out she starts woofing around and pacing. But the pacing happens first so that's when we hustle her right out.

So that's what we do. So far so good. And if you will pardon me... its about time for me to take that pup out. So I'm gonna pull on my hat and find a happy voice and tell her what a good dog she is.

Happy housebreaking everyone!
Posted by Ohiofarmgirl at 4:13 PM