As I'm writing this (Wednesday nite) its a balmy 22* out there but tonite the low may be 7*. That's right 7*... that's SEVEN degrees. And that's without any wind. With the windchill we'll be about zero. Yikes! Hopefully the cloud cover will hold together and we'll only get down to 20* but we aren't taking any chances. 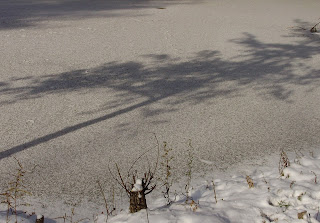 On frozen pond...
There has been a lot of interest in a recent post about cold weather chicken care so I thought I'd fill in the gaps with a little bit about our cold weather care for the rest of the stock. 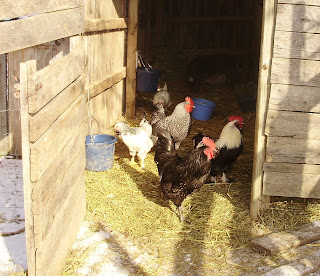 Roos in the sun - and Nibbles in the back. Eating. Again.
Aside from wishing you were with NancyDe on her place on The Big Island there isn't much you can do in the extreme cold weather but man up and face the cold. I was telling someone today that the extreme cold is actually harder on us than our critters. But they depend on us to provide the tools they need to deal with the cold, so pull on your big coat and get out there.

The big ideas for cold weather care for hens are the same with other livestock:

1. Get them out of the wind.
2. Feed little and often.
3. Make sure they get water at least twice a day.
4. Bed everyone down so they are dry

We knew we were getting a cold night so we spent today making sure that everyone was well fed and bedded down. We had to go and get more straw - there's an old timer around who sells big bales for about $3. We like to go there because he has a wonderful herd of barncats who come out and supervise the straw loading. Around here you just pull into the drive, park by the shed with the "For Sale" sign, put your money in the pay box, and load up.

We used some of the bales provide a windbreak for the beez - we just stacked them up around the hives. Then we got to work making sure the rest of the critters had a deep, dry layer of straw. We took care to make sure the waterfowl had lots of dry bedding.

The hens had mostly dry bedding but we put in a few extra fresh shakes - not only will this provide another layer of bedding.. but it also gives them something to do. They like to scratch around in the fresh straw and pick out the goodies. Hens are industrious by nature so don't make it too easy for them to just laze up to the feeders. Put some feed, scratch, or grains in the bedding so they can keep busy and stir up the bedding to keep it dry.

The pregnant goats, Debbie and Nibbles, got more bedding but more importantly we made sure both gals were well fed - I added an extra handful of sweet feed - and gave them warmish water. Of course they got extra hay. We don't keep them inside during the day especially if its sunny. Both gals were out walking around in the snow today seeing what was going on.

When its this cold we don't rush right out there in the mornings but rather we wait until the sun has cleared the treeline and is shining on the hen house. This keeps everyone snuggled in and takes advantage of their community body heat to keep the buildings/coops warm. 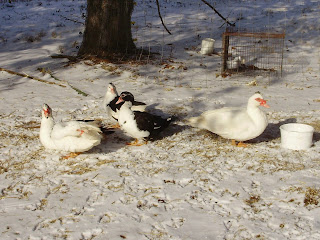 Ducks don't care two hoots about the snow
Despite all our efforts to keep everyone wamr the ducks march out in the morning, walk over to a sunny spot, and promptly sit down on the ice and snow. They sit there until we bring buckets of water (from the outside faucet not warm water) then they dunk their heads in and give themselves a bath. They couldn't give two hoots about the cold.

The geese do just fine also. Remember that waterfowl are built for the cold - even their feet which are not protected by their fluffy downy feathers aren't really bothered by the ice and snow. They have very little feeling in their feet so they happily march around the yard like its no big deal. Keep an eye out for frostbite but keeping them dry is the best course of action.

The geese, who mostly graze, get grumpy tho because they don't have easy access to grass under the snow. We make sure they have plenty of corn and bagged food - and also put some hay out for them to snack on. The turkeys are about the same. The guineas have stayed inside for the last couple days but today they popped around outside... until they had enough then went and angrily stood by the door to their coop until we let them back in.

As our dear Chai Chai found out, make sure you get everyone in (sorry to hear of your guinea loss, baby) and locked up for the night. Start herding them in earlier than normal on cold days - as much as an hour or more than your usual time. Getting them in a bit early gives you extra time to round of the stragglers, provides the opportunity for all those little bodies to warm up their shelters, and gets them used of being inside (knowing our cold season isn't even upon us). Running around in sub-zero temps trying to get one little mischievous hen to go in isn't fun at all. Get your feathered pals used to an earlier day - for everyone's sakes. 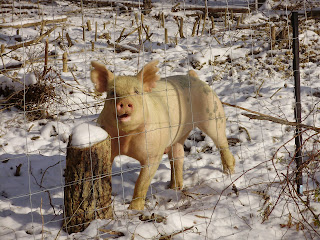 Bacon is ready
Because of the events of last week we were not able to get our pigz dressed yet... so we did not expect to have them into this kind of extreme cold. We kinda joked that if we went out there and found porkcicles that half the work would be done. However, loosing most of our meat supply for the year would not be funny at all.

So we wrapped their hog hut - which is really just a three sided shelter made of pallets whacked together by someone who didn't really know what she was doing - with a tarp and made sure it wasn't drafty. We triple fed them a lot of corn - which some consider to be "hot" food - to help keep them warm. It will also make 'em good and fat and you know how I love lard. They already have developed a healthy coat of hair which keeps them warm... and we have 2 or 3 feet of straw for them to snuggle in so they should be OK. Fortunately, all their problems will be over soon and they only have one last really cold night.

Probably the hardest thing is for you to man up and get out there. Make sure you are well layered in your work clothes - have warm, good fitting gloves (so you don't take them on and off to open latches and such), a hat, and a jacket that fully covers you. Don't worry about looking like the Abominable Snow Dork. The turkeys won't care what you look like but if you flop over and freeze out there... well... there's just no telling what the chickens will do with you.

Now go and find your snow pants and get out there and get your chores done!
Posted by Ohiofarmgirl at 6:02 AM

The chickens don't care about the bundling, but our goats pretty much freaked out the first time my Mom ran out to milk with a scarf on!

My chickens and quail aren't so picky.

All good things to consider. I remember the twice a day watering and putting up plastic sheeting so the chickens could be out of the wind in upstate NY growing up. They really enjoyed being in the sun behind that plastic. It makes a tremendous difference for them.
Stay warm!
Veggie PAK

hi Naomi! thanks for stopping by - feel free to join in anytime. I don't think my goats have looked at me any weirder in the cold.. but the first couple hops around on the milk stand with "hey hey hey your hands are COLD!" reminded me to warm them up first.
;-)

Hi VPak! Great idea - kind of a little green house for the clucks. I love the idea of having a full sized green house for late fall greens..then using it for chickens in the winter.. then for early spring planting/seed starting. Thats one of the projects on my 'to do' list.

Yep, I am planning on getting some more straw because we might see -20* Saturday night.

Bonus points, CC, for good use of scifi words! BTW, we loved the new Battlestar... Caprica was such a disappointment tho. Anywhooo.. Do whatever you need to bed everyone down tight for your extra cold! Stack those straw bales up to create a windbreak, hope the sun is out in the morning, and feed feed feed. Take care of yourself too!