Today was ridiculous. I got a teaspoon of milk from Nibbles and I got chased by an angry bee.

Someone stirred up the beez and I was relentlessly pursued by one of those no-goodnicks. I even did the "ohmigosh there's something in my hair" dance. All my shrieking and cavorting did little to hurry The Big Man to my defense. He moseyed. But he did save me. Eventually.  Anyway.

How cute is this? 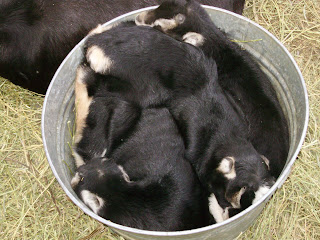 Debbie's babies exhausted themselves so they all fell asleep in the big tub.
We were all outside today - it was just like heaven. With one little curly tailed imp who was sent to the deck by herself for chasing the chickens. The mouthful of feathers did little to convince me "all's she was doin' was licking that little hen nice and gentle." Hogwash. Kai wasn't cleaning that chicken, she was tasting her! The chicken is fine, Kai was devastated at the punishment of having to sit alone. She's learning to control her puppy self. But its hard when you are only about six months old.

Quick farm notes and apologies for not responding to all the great comments! This time change always discombobulates me so I'm trying to catch up. Thank you to everyone who has taken time to say hello and leave a nice note. I'll get caught up soon.

Farm Notes:
* Started 2 trays of seeds in my outside hillbilly green house - sunflowers and swiss chard. Setting them out this early is a big risk but I can't look at Ginny's greens anymore without doing something.
* Started one tray of sunflowers and scarlet runner beans inside in a window. We'll see how long they last before The Insane Cat Posse thinks I've set out a litter box with a view for them. Taking all bets.
* Started several containers of gladiolas. Two bulbs each in pots and under cover. I got the bag of mixed glads from Sam's Club. They had 90 bulbs for about $13! It was a steal for sure.
* Turned over the compost pile by the turkey house. Dogs thought it was the best thing they'd ever seen. Nice and stinky (in a good organic, "Momma can I roll in it" kind of way). Kai helped by digging. I think she exhausted herself today.
* Got a big truckload of hay from our hay guy - should keep everyone happy thru mid-summer.
* We drug Nibbles into the garage for her first milking. What a waste of time. She pounded a huge bucket of feed and I got about a teaspoon of milk. Sheesh! We need to get her back into action. I'll start working on her performance metrics soon.

I got an email from a guy today about one of our ganders for sale. He said that he was in Afghanistan right now with the Air National Guard and could I hold a gander for him until he gets back in April? Yes, yes friend I surely can. And thank you for serving our country.

Happy Tuesday everyone!
Posted by Ohiofarmgirl at 6:28 AM

I almost teared up thinking of that guy sitting there in a war zone planning his return home and the geese he's going to have once he's no longer in a place where people are trying to kill him. Lord.

That's nice that you are keeping the gander for the soldier. They are doing their best.
On another note, the kidz look adorable!

I have never before seen a bucket of goats...crazy kids.:) Sounds like you are busy, busy, busy...and poor Kai, all she just wanted was a taste. Happy Tuesday!

The first time my dog saw a chicken, he was about 4 months old. He swatted it, and lay down on it. The chicken was fine, but my guy's aunt just about had heart failure. Lol.

Had to giggle at just the title of today's blog, to say nothing of the contents! :) Love it! -Susan

That bucket of babies is nothing but CUTE! I love it! Pups tasting chickens is a problem around here too :( I was hoping they'd outgrow it, but they haven't. We just don't leave them outside alone when the chickens are out. I hate it, but that's the way it's gotta be......

Ahh Nibbles....hehehe. I HATE this time change. I'd rather have it be daylight at 6 am and dark earlier than the other way around. Glad you were rescued from the bee....eventually!

I'm not a big crier, Kristin, but I had the same feeling. If he wants our gander we are working on a way to deliver him so his lady goose doesn't have to wait.

You said it, Autumn. I'm not sure this man knows how much we here at home appreciate his service. And what else says "thanks!" like a big honky gander?

Mr. H. - Poor Kai alright, it was very sad. She started with the sad howling... she knows how to work it for sure. I think she's trying to figure it out in her head. Its ok to "pop the chickens back in" but not to lick them.

Thanks Rae! Yep we've had to work with all our dogs to curb their prey instinct. Its not difficult, just tedious.

Hi Susan! Nothing but shenanigans here.. thanks for stopping by!

hey B2B! We dont generally leave them unsupervised either. We dont have a worry about Dog#1, but Dog#2 can get a little over interested. And Kai aka "Half" (she's not big enough to be assigned Dog#3) aka "Wiggles" aka "LEAVE THAT BE!"...not a chance. She'll come into her own tho - soon.

Great picture of the kids, could be an award winner. Not often a dog gets rewarded for digging, hope Kai doesn't get confused.

The "something's in my hair dance" is one of the all time classics, a frantic beat with an epic finish.

Bucket of babies is ADORABLE. :)

And good for you making every effort to get the gander to the soldier's family ASAP.

I SALUTE you for that :)

What a cute bundle of joy Debbie's babies are!

Apart from the bee attack it sounds like you are having a wonderful time there OFG. And a busy one too!

Thanks Naomi! I hope he wants our gander - I just know he'd go to a good home...and we'd love to help.

Hi Grandpa! These little ones are just hilarious. They run run run run... then fall asleep. Its a hootenanny out there! (hows that for an crazy American word?)