Today (Wednesday) was an epic day here on the farm. I'm exhausted, my arms hurt, I'm covered in mud, we were chased by beez, and some small creatures have decided that I'm an udder.  And that's not even the half of it. 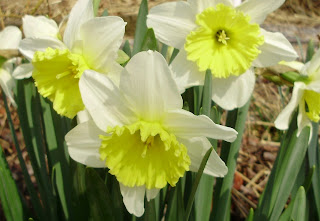 And the daffodils bloomed - what could be better?
What a day!

So much has happened my head is spinning and so I'll just have to summarize:

* We pulled the Milk Stealers from Debbie last nite - and this morning (Wednesday) Debbie was so full she could barely walk. So I ran for the bucket and she milked 12 cups!!! That's as much as Sunny!
* Sunny milked a total of 22 cups today - she didn't even break a sweat.
* Nibbles' babies - the Niblets (thanks Freemotion for their new fun nickname!) did just fine on their first day with the bottle. Little Guinness did the best and he's excited about going to his new home. During the last feeding Stout decided that the bottle was the business and she filled her belly. And decided that I'm an udder. She even bonked me trying to get more out. How cute is that? 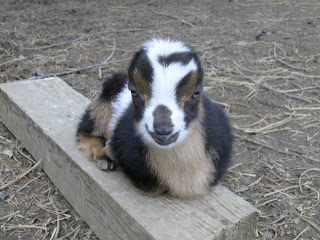 Little Stout - thinks I'm an udder.
* We started the day with weirdly warm weather so I ran outside and started another tray of seeds - asparagus and more greens. I've never done asparagus seeds.....of course I skipped the "soak for a day" first figuring the rain we'll be getting the next few days will be plenty of soaking for them. They are currently outside with the flats I started the other day. Some of the sunflowers are starting to pop. I need to be careful to cover them when we get a frost. But so far so good.
* Daffodils are starting to open and its wonderful to see a little life out in the yard.
* I tried an experiment with some potato trimmings. I had some that had formed little sprouts so I trimmed them generously and planted them in a tub. We'll see if this works. 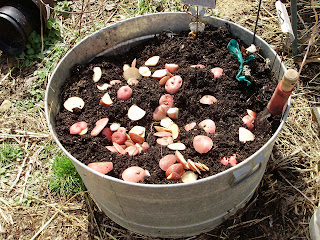 * Our weirdly warm weather resulted in a a tremendous storm - the news kept cutting in with watches and warnings. I even abandonded my post at cutting the cheese because it got so ferocious.
* Of course with all the milk we got today, I started a gouda. It was gouda...I mean.. good to get back to cutting the cheese...curds. And I finished up the fresh chevre I started yesterday. I had some of the fresh cheese in an egg-bacon-goat cheese scramble with some fresh chives that popped up. It was fabulous.
* I also had an epic baking day - did you see the Mennonite girls making pop tarts? So did I! So I did too. And then we had to have at least one tiny pie, two loaves of bread, and biscuits. I'm very carby and I like it.

But then disaster. As we were finishing up our evening chores we found that our front hive had been blown over! It was in pieces and all tumbled down! So The Big Man sprang to action to save our beez. Part of the action included some running and some stinging. But we regrouped and saved the hive. Tonite we'll have temperatures below freezing so thank heavens we got the hive put back together and saved the beez!

Of course, when I say "we" I mostly mean The Big Man... but I did a lot of long distance directing and hopping about. And I yelled helpful encouragement like, "DON'T RUN THIS WAY! YOU'RE ON YOUR OWN!" But I got to work the bee smoker thing so that was fun.

The good news is that the hive is full and vigorous. The bad news was - they were really ticked off.

As I was mentioning to Ginny in the comments the other day - this is just the start of our busy season! We'll be ramping up soon. I have a feeling we'll have one more round of cold weather  - then we'll be home free.

Happy Thursday everyone! And remember...if you see a beekeeper running, try to keep up.
Posted by Ohiofarmgirl at 6:46 AM

My goodness girl...you've been a busy bee!!! Stout is just the cutest :)

That little Guinness is just the cutest thing! Glad you got your bee hive back together - must have been quite a storm to blow it over! You day of baking and cheese making sounds fun. I bet those pop tarts are to die for!

I bet your daffodils look as sad as mine do this morning since it got so cold. I'll have to look for my chives, didn't even think of them until you mentioned yours! Woot!
-Java

You Can Call Me Jane said...

Girl, That's quite a day. Sounds like you live in the promised land- all flowing with milk and honey as it is:-).

Running from those beez will keep you in good shape and you can eat all the carbs you want :o) and then you'll end up with a fat butt like me :o).. The actions on your farm keeps me in stitches , don't slow up :o)

Your daffodils are beautiful, as Little Stout is cute.

So you were the director of operations - hope you and Big Man didn't get too many stings.

Busy days ahead - I hope the weather warms up for you pal. Take care.

Hilarious post! You got a hearty snort-laugh with the photo of Stout- such a wicked/cute expression! Scampy little niblets! Thanks for starting my day off on a great note (snort non-withstanding). Happy Thursday! -Susan

Ohiofarmgirl. I thought you were supposed to cover those potatoes eyes in the dirt! Have you done them like that before? ...I'm still learning what to do.

Gotta love the Ohio spring. I always think of that old Paula Abdul song, "I take two steps forward, you take two steps back..." It will get her eventually. I haven't seen any forsythia blooms yet, have you? Stout is adorable! I can't wait to get my farm and get started. I'm in contract on a little farm just east of Newark. Maybe you can be my online mentor once I get started ;-)

I can't even imagine trying to put an active hive of bees back together, the Big Man must be amazing.

Love the Niblets, a great nickname for them.

B2B - some folks 'round here have made wild accusations that bears knocked it over! Pop tarts were pretty darn good.

ThyHand - we are always laughing about the "milk and honey".. yesterday was a banner day for both!

Ginny - I think you are the beez knees! And yes, all this running lets me eat a lot of pie.

Thanks Susan! I couldn't make up this silliness if I tried. Stout is a cutie... I might be suckered into those little eyes.

Ginny - I lightly covered them, but mostly I piled on the straw. Some folks really dig them in but we prefer to "mulch." Mostly they dig themselves down into the dirt.

Blessings - it was interesting.. crazy.. ridiculous...and funny. I never had days like this in my corporate life!

Jeff - the weather guy SAID he saw them bloom.. but not around here. And yep! Come on by - we'll all learn this together. Hope you get the property!

What a day! Sounds like you did indeed have an "udderly" epic series of challenges to deal with. I love your potato experiment...you really must share the results be they good or bad. Be careful out there, it's a crazy world you live in...but a good one.:)

Ahhhhh - a bear sounds a much more likely suspect to me, too. I was thinking it must have darn near been a tornado to knock a typical bee hive over! Maybe time for some electric wire?

My in-laws are getting them their first bee hive. I can just imagine them doing the same thing as you guys did. lol! You always make me laugh!

Mr. H, it IS a crazy world. We keep laughing that these adventures could happen to "only us."

B2B - if there's bears I'm leaving. But really - there was a lot of damange in town so we are guessing crazy wind. We think we had some monstrous gusts and they had "rotation" north of us. One person insists it was bears but he's been known to be a drinker.
;-)

hey SFG - tell them that grabbing a hive of angry beez is not for the feint of heart! But they will love having them.